Trillaphon: Uhhuhuh, hey bb, is that a flying fox in your throat or are you just happy to see me?

Trillaphon: Not even the guy who talks like someone doing a bad Zapp Brannigan impression and looks like someone who jerks off to Cop 'Stache Weekly is safe from the murderous cat rampage.

Hydrogen: Jesus, the cat doesn't even need to kill half these bozos, they're so dumb they're doing all the work for him:

In case of emergency, shoot self in face.

Hydrogen: Maybe he just couldn't suffer the indignity of running around with James Bond's girlfriend's babysitter's backup clutch pistol and decided to end it all with a suicide schvitz.

Trillaphon: "This is a .22 regular, the least powerful handgun in the world. It'll leave your head clean on, and intact, so you can just pretty much go ahead and keep using it like you normally would."

Hydrogen: Oh great, well I guess hand stuff is out of the question now.

Trillaphon: I like how he saved everybody the trouble and just preemptively murder-suicided them into the ocean so they wouldn't have to bother hucking their corpses over the railing like so much chum later.

Hydrogen: That guy wanting to drown himself I sort of understand, but maybe the girl shouldn't have been on a party yacht if touching the water kills her instantly. 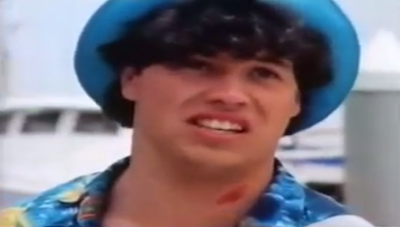 Cha, can’t wait to tell Gudzo and the Chud how I totally upper-deckered this solid gold toilet.Trillaphon: Ohhh, I get it - maybe this movie is supposed to be a murder mystery, only the mystery is how a shipful of able-bodied grownups can't stop getting murdered by a house cat with anger management issues...could be Clue 2 - you know, like Speed 2: they just put it on a yacht and took out all the good parts.

Trillaphon: Speaking of which, so they're in the middle of the fucking caribbean on a yacht bigger than a Russian oligarch's and there's no ship traffic/nobody can respond to their mayday for 10 days?

Hydrogen: Well that one guy did shoot the radio, so I'll give them the benefit of the doubt on that one.

Trillaphon: I'm sure that's the only radio they have on a multi-million dollar ship meant to carry up to 300 people and 50 hookers.

Hydrogen: I feel like his multi-million dollar yacht should have had maybe a backup engine or some oars or a sail or some life boats or a flaregun or emergency plausibility kit or something

Trillaphon: I feel like it's taking them longer to sail their state-of-the-art mega-yacht from Ft. Lauderdale to the Cayman Islands than it did for the Hawaiians to paddle to Polynesia in goddamn canoes.