Some Basic Facts About My Cool New Asian Friend

2. His older brother is a democrat.

His brother is in college and always wears this shirt with a guy with a beard and long hair wearing a flat hat and looking up. He told me it symbolizes not liking Our President Bush, and I gasped out loud because I had never seen a satanic symbol before but it was kind of cool and made me want to high five him even though I knew it was wrong. Jesus says you shouldn't think about politics until your mom says you can (I don't know the bible quote for this one, but my mom says she's sure she saw it one day and that it's better to be safe than sorry).

Speaking of politics, here is another joke: Knock knock. Who's there? A liberal. A liberal who? A liberal who wants to destroy America. Let me in. 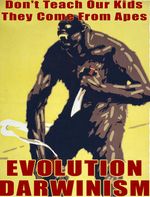 He totally took a sip of beer once when his dad wasn't looking and he said it tasted gross but he took a second sip so he would get drunk. Isn't that the coolest thing you've ever heard?

4. His dad teaches biology at the community college.

This means he practices evolution in the classroom, which would be illegal if it weren't for terrorists in our government creating fossils to brain wash children. Usually his dad isn't home, but when he is it's really weird to talk to him because I know he's going to hell. The Bible says "Woe be upon witches, and sorcerers, and biology teachers. Put the woe on them." (John 3:5) and there's no two ways of reading that. There's only one way of reading that, which is that he's going to hell. I won't put a joke here, because hell is no laughing matter.

On second thought, I have a joke that's too good not to put here, so here it is: Q: What did Judas do to Jesus? A: He double-CROSSed him. Jesus died on a cross because of Judas being a jerk.

5. His parents took us to see Meet The Spartans.

I didn't get any of the jokes because they were all about Popular Culture which is another word for everything people spend their day thinking about when they don't know yet that you have to think about Jesus all the time. But I laughed when everyone else laughed and I felt really free and Mr. Harding would have said that was a sign that sin was lurking it's ugly head somewhere in the movie theater, but Mr. Harding is stupid and his stupid voice is also stupid. As you can see, my cool new Asian friend has made me a little rebellious, which is Only Natural For My Age as long as I don't die right now because then I'd go straight to hell but if I live until I Grow Out Of It then I won't go to hell.

That's probably enough info for now about my cool new Asian friend, and it gives you a picture of what he's like, which is awesome. He told me that I don't have to listen to my parents all of the time and that I should think for myself, so I thought of a great idea.

I think it's time I beat the tough challenges people have for my religion with the help of Jesus ("Those times when there were only one set of footprints, my child, were when I was off kicking the ass of anyone who was going to get in your way, totally wailing on them with my humongous biceps. Do you want to touch one? They're huge." Luke 14:2). So, here's what I would like you, the readers who are reading, to do:

If you are caught up in the cult of atheism that tries to kill God through secret plans using science, I want you to email me with reasons why I shouldn't believe in God or be Christian anymore, and I will show you how those arguments can all be easily dealt with using things like proof and debate strategies. Send me your toughest reasons you hate God and think he died or whatever it is you believe, and I will show you why you are totally wrong about that. As always, send those to maxnmona@somethingawful.com and he'll get them to me, because my mom has all these net watchdog programs on my computer and if I click the mouse on anything I get in trouble. Anyway, send them if you dare...

One last joke though: A Christian and an Islamic walk into a bar. The Islamic says "Oh no, I can't drink because it is against my religion!" The Christian drinks an entire can of Bud Light without stopping and says "Funny, because I'm the one who's going to heaven." And then he ordered a Sprite for the Islamic because it's important to be forgiving of sinners. Thank you for reading my article.