At the Goddamn Movies: American Pie 2

While Lowtax is Away…

R-Lo is still having problems with his cable modem so, for the next day or two at least, you fine readers are stuck with me. Since Lowtax can exert no control over me I am free to unleash all of the features I have tried in the past that met with little or no positive feedback. One such feature is "At the Goddamn Movies", so today I thought I would dredge this one up and offer a review of the recently released film "American Pie 2". The first installment of "At the Goddamn Movies" featured my esteemed colleague Al Derby and I discussing the positives and negatives of "The Mummy Returns". Unfortunately, Al was unavailable to assist me with this review of "American Pie 2", so I enlisted the help of the next best person; Mahila, the shrieking Arabic woman who lives across from me in my apartment building.

Naturally to keep our review completely fair neither of us has ever seen "American Pie 2". I did at least try downloading a DVD rip of the original from KaZaA but some guy kept remotely queuing me.

At the Goddamn Movies: American Pie 2 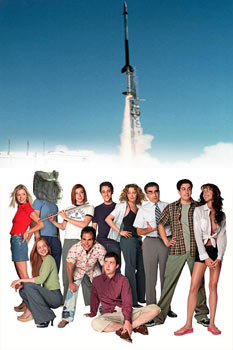 This movie has it all; hilarious teen sex, t-rexs, giant asteroids, and nuclear missiles.Welcome to the second and more than likely final installment of "At the Goddamn Movies", with myself and Mahila, the shrieking Arabic woman next door. In places I have added my interpretations of Mahila's meaning as, at times, piecing together her intended meaning proved to be a bit of a sticky wicket. To conduct this review I lured Mahila into my apartment with the promise of money and sweet cold drinks. I then tricked her into allowing me to tape record our conversation about the movie "American Pie 2".

For those of you not in the know, "American Pie 2" is the sequel to the aptly titled "American Pie 1", which was a big success in theatres everywhere like a year ago or something. It stars up and coming star Jason Biggs, Shannon Elizabeth, Alyson Hannigan and I think some guy from Dawson's Creek. I'm not sure about that last one, because I never watched that show, except for the time I got drunk and did it on a dare, but that doesn't make me gay.

Zack: American Pie was a delightful teen comedy sex romp that included two of my favorite aspects of American cinema; attractive teenage girls and sex. The addition of comedy to this equation literally blew my socks off and thanks to my "once a week" policy on sock changing, that is no small feat. However, Shannon Elizabeth has a mouth that I find frightening, and whenever she was on the screen I was taken back to my early days spent chasing phosphorescent anglers deep beneath the ocean.

Mahila: What is ocean about this movie? This movie is teenagers kissing and hugging in a way that should not be allowed in public and it is in more than public it is in movie. Take this off the air.

Zack: I see where you're coming from my good friend, but I can't agree with your take on the dinosaur theme. I felt that they were not really intended to be realistic and more represented a primordial evil conjured from the depths of Dr. Pretsche's [Biggs] subconscious.

Mahila: Now you talk about dinosaurs. I don't know where you are getting things, maybe you are confused with this movie Jurassic Parks. American's Pie is more about the sex that you Americans like to talk about all the time and it is just kids. So bad!

Zack: The use of time travel to explain the reappearance of the Necronomicon on Joanna's shelf was a poorly used plot device. They never really offered the slightest reason as to why she would have the foresight to save the tome from the fire at the asylum and THEN place it in the coffin that they discovered in the flooded village. I felt like I needed one of those silent movie title cards just to have a summary of what was transpiring in the plot.

Mahila: What are you saying now? By Allah I [Mahila becomes incomprehensible at this point. To summarize what I am fairly certain she said, she complimented me on my astute analysis of the plot and offered for me to make love to her on a bed of roses. While I was eager to sheath my sword in her spicy Middle-Eastern love glove, I was a bit put-off by the way she actually did wave a sharpened saber at me while ululating.]

Zack: True, but do you really think the rocket would have stopped the incoming asteroid? Based on the monologue by General Llewellyn, the idea was that even if they did unlock the Seven Stones of Aramus, they wouldn't be able to launch the missile in time to block the asteroid's trajectory. I don't even know why the bellydancers bothered putting on their "finest silks" for that ritual, it was a foregone conclusion. The rocket did not have time to prep and launch with the Seven Stones inside. It was a crappy, hack-written Deus Ex Machina ending, just as bad as that fucking plane at the end of Saving Private Ryan.

Mahila: Aiiiiiiiiiieeee [At this point in our discussion Mahila began to chase me around the apartment trying to cut off my limbs with her sword. I interpreted this to be some type of Arabic foreplay. While I appreciated her unusual sexual advances I did not appreciate the deep wound I received in my left bicep when I tripped over a lamp cord and she hacked me with that accursed sword. I managed to retire to my bedroom, dress the wound and emerge wearing a terry cloth robe with "SEX MASTER" written on the back. Unfortunately, in my absence Mahila had broken my bottles of liquor all over my apartment, set my couch on fire and written something in Arabic on the wall in my blood. I doused the fire with a bucket of sand I keep nearby at all times and headed across the hall to see if she was still game for a roll in the hay. One of her roughly seven thousand children answered the door waving the saber at me and yelling something about the police. While I am an adventurous sort in the bedroom I thought it best to politely turn down his request to join us in a game of erotic "cops and robbers". I did this by keying the word "cuntface" into the driver's side door of her car.]

Zack: Well, that about wraps up this edition of "At the Goddamn Movies". I would like to recommend "American Pie 2: The Quickening" to anyone who enjoys a delightful teen sex comedy that simultaneously amuses and explores the deep themes of innate evil and original sin. On an arbitrary rating scale of zero to 75, I would rate this movie a solid 60.

Since Mahila abstained from the final voting process I will enter her as giving "American Pie Deuce and a Half" a 93 out of 150. On the composite average index this gives it a respectable 77 out of 205. Wait, that can't be right. Fuck, this sextant must be misaligned. I'll get back to you on this one.

Fireman is on the Case

What ho, a wholly original Fireman comic straight from the mouth of madness.

Kids, if this is your first encounter with that wacky fire fighting hero, might I suggest you check out his absolutely amazing web site? Go there now and your life and destiny will be forever changed!