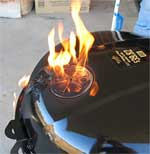 If my bill is passed, half of Hollywood will live in here. The other half will be in the ocean.Ladies and gentlemen, it has come to my attention that southern California contains an untapped source of unnatural resources simply sitting there and going to waste as we, the American public, ignore the problem by watching our reality television shows and drinking our liquid margarine protein shakes. While half the Earth starves to death in their mud-strapped, sun baked huts of rancid squalor, a virtually limitless supply of crucial building blocks continue to literally walk around right underneath our noses.

Today I realized southern California, Hollywood in particular, easily has the potential to become the world's first and foremost plastics recycling center if they just took a few cheap and easy steps to melt down their biggest waste sources - Joan Rivers, Cher, and Phillis Diller - and transform them into valuable new resources such as PVC piping, CD cases, and office accessories.

Now before anybody accuses me of promoting murder, let me make one thing clear: the definition of "murder" requires the death of another human being. Not a single shred of humanity resides in Joan Rivers anymore, and scientists declared long ago that Rivers has more in common with a highly developed wad of Bazooka Joe bubblegum than she does with an actual living human. The California judicial system seems to agree with them; last summer, when Rivers' limousine was blindsided by a drunken driver, they declared she could not sue the driver of the other vehicle for her injuries treated in a hospital, instead claiming her insurance company and medical team owned more of her body than she did. This all worked out fine, as Rivers was escorted to a nearby Jiffy Lube where they not only repaired her ribcage and right arm, but additionally cleaned and rotated her gall bladder.

Let's face facts, people: nobody can remember the last time Joan Rivers, Cher, or Phillis Diller ever did anything of worth or value. I mean, what are they? They don't really sing anything anymore, so they aren't musicians. They aren't constantly on movies or television. They just kind of show up whenever something important is happening and the media, interested in an interview with Gumby's relatives, approach them and begin asking their opinion on popular events such as President Bush's reelection and if they'd like to star in a reality show that revolves such hard-hitting topics as "owning a pet" and "going to the store." The only reason these three cybernetic mannequins haven't died yet is because Mother Earth refuses to accept their artificial corpses into her womb, opting to coldly reject them back into the realm of the living each and every time they experience a brush with mortality. Check out these brief bios I put together on each of these so-called "Hollywood stars" and try to convince me one of these three plastic divas has something to offer our culture besides their ghoulish grins of despair.

Used to have a successful music career until the mineshaft of plastic surgery in her mouth collapsed, trapping five workers and making it physically impossible for her to ever open her mouth. All food and drink is ingested through a special "feeding tube" through her larynx. This tube has ports for both Firewire and USB.

Starred in the 1985 hit drama "Mask," a touching story about a boy attempting to overcome his horrible and grotesque facial deformity. She played the part of the mask.

Upon hearing a series of strange sounds behind her in a nearly abandoned office building, Cher was able to hide and avoid being mugged by turning into liquid metal and taking on the form of the black and white checkered floor around her. Additionally, she won a free cup of coffee that day.

Not only provided the voice of Miss Piggy's co-worker in the 1984 movie "The Muppets Take Manhattan," but also donated key parts of her central nervous system to the animatronics crew.

Thanks to her recent implants by OCP, Rivers is not only able to shatter glass with her shrill, harpy-like voice, but she can now reassemble this broken glass with her laser eye beams.

Has agreed to host this year's Golden Globe awards with her daughter Melissa, where she will ask just hard-hitting and humorous questions as "hello" and "how are you?" and "have you seen my face?"

Once swallowed an entire star system to punish the residents of a single planet.

Had her hair replaced with fiber optic filaments manufactured by the Israeli Army in 1997, each strand strong enough to bend a railroad spike. The neural network linking these strands went down around June of 2003, causing them to grow out of control and constantly reach out for nearby life forms to probe for weaknesses and ultimately strangle them to death.

Has a series of implants in her chest which can cast both LIT3 and FIR3.

Despite the fact that nobody in this terrible trio has accomplished anything of value within the past few decades, if not eons, they still maintain some sort of celebrity status for reasons unknown. Why? I cannot think of a single noteworthy thing any of these people have done offhand, besides marry people who killed themselves in a last-ditch effort to free themselves from their wive's undying stygian horror. The only noteworthy thing about these people is the amount of raw plastics and man-made alloys inserted into their bodies every day to fight the rapidly advancing army of time. Take a look at this recent x-ray of Joan Rivers if you don't believe me: 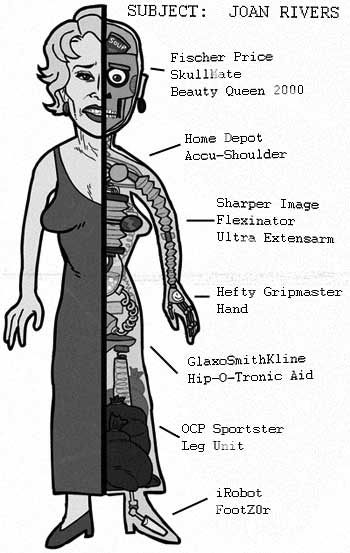 As you can see, there is more machine than man inside the taut, stretched proto-Apligraf exterior. Since these plastic Hollywood personas have absolutely no function or relative worth to society anymore, why don't we just toss them into the fiery pits of a recycling station and use their innards for good instead of evil / talk show hosting? Did you know that for every celebrity you melt down, you can create:

Half a garden / tool shed

So ladies and gentlemen, please do your part and help me lobby Congress to melt down a celebrity today. Have you found some Hollywood has-been who hasn't-been anything in the past 10 years? Torch 'em! Know of some movie star who can't find a decent script or, worse yet, discovered Scientology? Toss them into the fire! The only way we can insure these ex-stars are never given their own reality shows and permitted to torture us for countless more years is by escorting them into the plastic-burning inferno of righteous recycling, converting their man-made bodies into a valuable resource and finally allowing them to give something back to society. You'll thank me the next time you purchase a DVD, examine the case, and notice its five-inch long eyelashes winking back at you. Better yet, you'll thank me when you realize your future children no longer have to grow up in a world inhabited by Carol Channing, assuming she hasn't already consumed their souls.