I hate to bother you, but I need money. Just listen to this one sentence, please 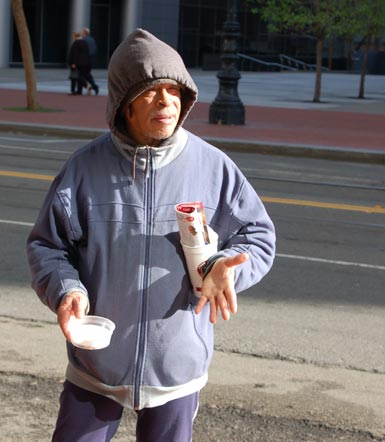 Hey man, I hate to be a bother, but I got a little problem, you see, and I know you're probably busy, but if you just give me a second, just a sentence really, I think you'll change your mind, so just let me explain my problem in one sentence, and then you can go on your way, and you'll never have to think about me and my broke down car that's sitting in the middle of the road a few blocks back--engine problem, probably the transmission related, or wheel things, either way the leather seats are way too hot, and I need a few bucks to get to the car shop to get it worked on while I read an old issue of Time or People, and then I got to get to the hospital to visit my son, because the doctors say he doesn't have much time, and man here I am shooting shit with a stranger, and believe it or not, I feel really bad about asking you for money, but a man's got to do what he has to, and I'm all like a Roman spear dude about to get down to business and stab the fuck out of whatever challenges rest in front of me, and right now I need to say I love you to my dying boy before it's too late, so do you have any cash, or if you got a card, maybe lunch, cause I haven't eaten in days, because of all this stress, and food poisoning from a taco bought at a taco truck, and the fact that Subway stopped their $5 foot long deals, mostly the taco though, but now the diarrhea's cleared up, mostly, so don't worry about having me leak in your car, but I'm a little nervous cause my ass is chapped up from all that acid I was squirting out, but, yeah, I'm better, well, except for the fact that my kid is dying, and I can't get my car started, and I haven't eaten since Tuesday, and I haven't slept in a few days, but I didn't tell you that part yet, and I figure you'll probably blame it on the diarrhea, but that ain't right, not right at all, because in truth, I don't know why I can't sleep, but it really bites, man, and even worse, I never really wake up, so I just wander around half erect, like your jimmy when a hot, foxy doctor is checking you for genital warts, but instead of a jimmy, it's just me Keith, standing outside of this taco shop for an hour or two looking for some money, lunch, or maybe, if you want, a cup of coffee, and most importantly, a ride to see my son, but I don't expect anything like that, since the economy is so bad, and people are all hungry, and I heard that people are eating each other in the west, but they are all homosexual Mexicans or some shit, so I don't really care, but in principle it's sick man, I mean, some dude in a sombrero over in San DiagLos Angel is eating a baby, and here we are, two civilized dudes having a conversation about my boy, who, I might add, is a marine, and now he is over in the hospital with two missing legs from the Al-Qaida Suicide Chainsaw Unit that caught him by surprise in some desert brothel while he was doing some investigation for Uncle Sam, but don't feel bad for him, because he was tough as nails as they cut off his legs, and put them in a pot to make a sultry soup, or some other tribal voodoo, but my son never backed down when they cut through the bone, nor did he stop praying while they did their creepy desert shit; however, they soon prayed for him to stop when he easily used his jarhead training to overtake his guards and shove those chainsaws down their throats, covering the whole place in blood and tooth parts while my boy crawled over the corpses into the daylight, where it's so hot that his oozing, gooey stumps were instantly cauterized on the hot sand as he inched closer and closer to the nearest base, but the hot sand was the smallest concern for him, since the trip took about three or four days (poor kid was tripping so hard by the end, that he can't remember how long he'd been in the sun,) and the docs said that the scorpion diet that saved him might also be killing him, since there is so much poison crystallizing in his bowels that when he shits it looks like a solid block of amber, but my boy ain't cried a peep from the news; instead, he just looked down at his mangled, dried-up hands, touched the wrapped up knobs that used to be kneecaps, and asked for his pa, and now he's here over at the free health center, barely hold 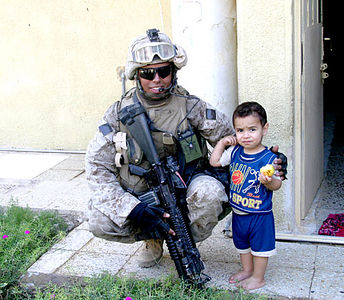 Picture of a guy who looks like my kid (the one on the left)ing on, slipping in and out of consciousness, but no one told me any of this until an hour ago, so I've been sitting at home watching Lost, confused out of my mind, cause the show is so damn out there that I can barely keep track of all the stuff, but I don't care, because it's fun, and I'm not too picky, and as long as the cable doesn't go off again, leaving me in the dark every night with no clue as to who got eliminated on American Idol, then I'm pretty happy, because that was how my son and I did most of our bonding, but the cable guy didn't give a damn when I told him about how my son and I watched those dudes sing from different sides of the world, nor did he stop his business when I offered to give him my body in return for basic channels, so there he left with my cable box and my main connection to my son, sending me deeper and deeper into the dark every week when my son talked about some dame, or gel-haired guy who got sent home, but now is my chance to get to see my son for the first time in a few years, and I'm extremely excited even though he is coughing up bug legs and about to die and he might be gay, but I don't care as long as he is here, and his mother, my stupid cow of an ex, doesn't show up with her lame soccer-loving chump and ruin the whole sadness with her childcare complaints, I mean, listen lady, it's been ten years, give it up, you're never getting your money, but she never listens, and never learns, so I'll probably have to fight with her over the breathing puddle of a man on the hospital bed that's quickly rotting away, but I'm used to arguing with her, and all women in generall, but that isn't a new thing, since it seems like they've been walking all over me for fifty-whatever years, but that's life man, and like I said earlier, I'm just a Roman spear dude, ready to fight, so what do you say man, I mean, do you have a few dollars, if not for me than for my legless, dying, gay, marine child?