I'll be honest, this is not good. We've been down by way more than fifteen at the end of the first half plenty of times. We've managed a few comebacks, too, but this is different. We're up against a hell of a basketball team tonight, fellas. If we're going to get out of here with the championship, we need to give it our all. 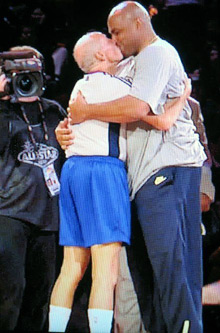 Ramirez. I'm starting with you because you're the only guy I can't complain about. I've never seen a player put so much effort into sitting on the bench before. Your repertoire of vague and ultimately meaningless bench-centric moves are incredible. I asked my assistant what you were doing, and he couldn't figure it out either, but we agreed that it's gutsy and fantastic.

Rest up, now. Get some water in you. You're going to dehydrate if you keep sweating so much.

Olshansky, why can't you put as much passion into sitting on the bench as Ramirez? I'd be happy with even half the effort. You're just sitting there, taking up space.

Look, I know there's debate as to whether people in comas can truly hear and understand the world around them, but my gut feeling tells me they can so listen up: Don't use this as an excuse to slack off when your team needs you the most, princess.

Carter. Ooh boy, Carter. You aren't even playing the right game out there. I mean it. Now hand over that DS. No arguing, I've warned you about this before. Here, take this Tiger handheld version of Double Dragon. It got me through the finals in '93. It can do the same for you.

Andersen, we need to work on your ball handling. I shouldn't be going over the basics with our star point guard at this point in the season, but here we are. You give me no choice.

Look, I don't care if the guy on the other team asks to see the ball, you don't give it to him. Yes, even if it's "just for a second" and he says please. The only people you should be giving that ball to are your teammates. Got it?

Well, the next time he says that ask him for a receipt. If it looks fishy, call a time out and I'll come take a look.

Vilsack, you're the United States Secretary of Agriculture. I have no idea what you're doing here. That's not even the right uniform. No, we don't wear space suits, Tom. I keep telling you, get! Do I have to call your parents again? Scram!

Sulvers. You're our big man. You can block shots, dunk the ball on pretty much any defender, and get rebounds because you're the tallest guy out there, right? Then please tell me why you're running around on your knees.

Yeah, I know that you had the fastest 40-yard knee dash in the combine. I'll be honest, that tipped the scales and ultimately led to us choosing you over the competition. But we need all seven feet of you out there tonight.

No, it's not that I don't believe you. I'm sure that you do get a much better view of the hardwood court's grain. I just don't see how that's going to result in our team scoring more points.

Fine. I'll give you the first five minutes of the third quarter to make it work. If it doesn't, though, you're on your feet. No more arguing.

Hopkins, I like what you're doing. You're quiet but deliberate, and you seem to pay more attention than anyone else when I speak. Unfortunately, you are on the other team. I think I told you this a few times in the huddle during timeouts. Right?

Don't get me wrong, I love your desire to learn all you can from a master of the game such as myself. All those notes you're jotting down, the photos you take of the chalkboard when I draw up plays, the boom mic attached to a transmitter. The camera crew. Great stuff.

Still, I'm going to have to ask you to go back to your team's locker room. Thanks.

Oh, it is? Sorry about that. I thought this was one of the balls I brought with me, I probably just got confused since it has my name on it in marker.

Wow, you look up to me so much that you write my name on your equipment? You're a sweet kid, Hopkins. Here's your ball.

That one too? Andersen, you heard him. Hand the ball over.