The Canadian Candy Challenge, Part I

Hey kids, if you were thinking of ordering Something Awful merchandise, now is the time! We're almost sold out of everything, and to be quite honest, this month has been really crappy money-wise. We had to buy a new switch and a $3300 Dell server to handle the additional load of traffic to this site, bringing the grand total of SA server horsepower (for both the site and forums) up to 6.8 ghz and 7 gigs of RAM. Help us cover costs by grabbing yourself some swank new SA merchandise now before it's sold out and we've been shot to death by an Awful Link of the Day webmaster. If you need any further motivation, here's an image of the brand new SA posters: 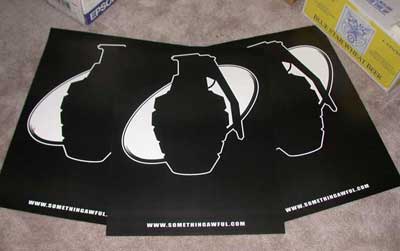 Wowee-zowee! If you guys actually purchase some SA gear, that would mean this site is one of the few surviving without relying on popunder ads or email address harvesting! Do you know how happy that would make us feel? It would make us feel about as joyful as knowing all the fur-suit fetish people were shoved into a rocket and shot into the sun! So consume for the sake of love!

The Canadian Candy Challenge, Part I 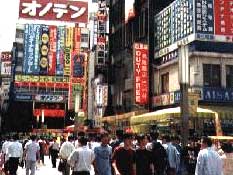 Vancouver. I think. Hell, I don't know, the amount of Asian people were about the same.

For some inexplicable reason, one that could probably be chalked up to paranormal activity, Emily, I, and my family decided that it would simply be just a marvelous idea to travel up to Vancouver, British Columbia this previous weekend. In case you aren't geographically competent, British Columbia is a hunk of Canada that lies somewhere on the west coast near Cuba or Atlantis I believe. We, as many other people from America decided not to do, took a little mini-vacation last Saturday to see the sights and smell the stenches of Canada. Now many of you non-Vancouverian people might be under the impression that this magnificent city is full of native Canadians or at least people who have at least a limited grasp of the English language. You would be wrong; Vancouver is full of Asians. Apparently Vancouver lies somewhere in between their home and place of work because the place was just jam packed full of Asians wandering around as if the magical Kodak camera wrapped around their neck was a divining rod guiding them to imported water. Let me take this moment to assure you that I'm not writing this to solely propagate racial stereotypes; the city was full of camera-wielding Asians. The whole "propagating racial stereotypes" thing is merely a side-benefit. The positive side of this coin was that we were all easily able to see over the heads of the teaming Asian masses and view the teaming masses of crazy homeless people who were staring back at the teeming masses of Asian people while begging them for spare quarters or ruples or rupees or whatever the hell Canada uses for currency. I'm fairly sure that the Metric System forces Canada to use chocolate coins for money. 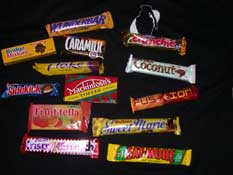 Vancouver is a fairly boring city if you're not interested in purchasing clothing from stores that you could get in any American mall. The highlight of our trip had to be the moment when Emily and my mother were staring at a huge statue of some guy who died doing something incredibly interesting, when suddenly a big white blob appeared on Emily's head and splattered across her shoulders. Upon further investigation, the white blob turned out to be bird crap and the person who got crapped on turned out to be embarrassed. Naturally, her loss was my gain, as I now affectionately refer to her as "shithead" and can justifiably do so without fearing yet another right hook to the skullbone. It's not a good sign when the highlight of your trip revolves around bird crap landing on your fiancee's head, unless of course you're not the fiancee, in which case it gives you a story to tell all your friends every time you get drunk or are sober.

Besides the disproportionate number of tiny Asian people, Vancouver also differed from America in their candy selection department. Now I don't want to point any fingers of blame here, but Canada has a megagram (that's the Metric System) of weird candy. Odd, unnatural, spooky candy that should only be sold in a country sealed in with towering steel walls lined with an electrified, radioactive, birdshit-attracting fence. Since the only thing Emily and I were bringing back from Canada was a story about a gob of her hair suddenly turning white, we decided to go on a Crazy Canadian Candy purchasing rampage and buy anything with an unfamiliar name. The point of this exercise in pain is consistent with the Something Awful website theme; we go to excruciatingly disturbing lengths to bring you, the viewer, information on the absolutely most horrific things lurking about the shadows. However, instead of presenting you images of gay furry 10-penised horse porn, we will now present you with our review of weird Canadian candy we purchased via the complex method of "seeing something on the shelf, laughing at its name, and then buying it." We were rewarded by having our beautiful American 20-dollar bill turned into a series of bizarre lightweight Canadian circlets which I think are used for teeth fillings or something. Regardless, let's move on to THE CANADIAN CANDY CHALLENGE, PART I!

Stay tuned Thursday for Part II of "The Canadian Candy Challenge" where we temp fate by trying to eat "Sweet Marie," "Flake," "Fusion," and "EAT-MORE." I don't think I need to describe in detail just how much we look forward to this. I might've actually just wet myself but cannot tell, as my bowels threw themselves out when they got a taste of "Crunchie.com." Somebody please save our souls because our bodies just died.

Made From Actual Nazi Gold!

The name's ScottyD and I'm here to say, that the Goldmine is bling bling and it' comin your way!

Hot, fresh, phat, and funky rhymes like that are only written when they're true. It's the law. We have a new Goldmine for you, and it's loaded with crap that you love. But just remember, it doesn't love you. You're creepy. 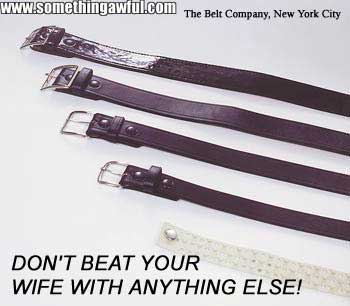 So go look at it, and savor the moment. Because your eyes could get poked out tomorrow, and then you'll wish you could look at anything.