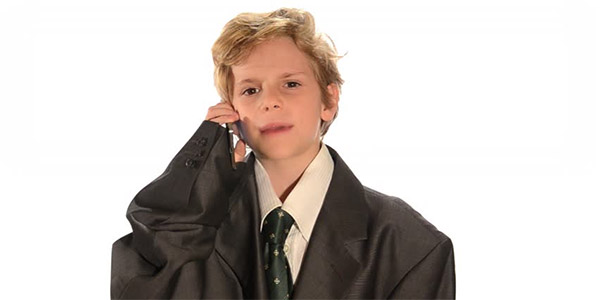 Washington, D.C. - In a move that has shocked his few supporters, child President Aiden Thompson, 7, blocked the passage of a bill that would do much to improve access to reproductive healthcare for American women. "Girls are dumb," said Thompson, choosing to not mince words. "They're dumb and I can run faster than girls. I'm real fast." Thompson then demonstrated his abilities to confused members of the press before refusing to answer any more questions.

Thompson's short run as President has been a controversial one, to say the least. After recent White House renovations revealed a lost page of the Constitution wedged under former President Taft's massive bathtub, it was revealed that the office of the Presidency could be transferred to any living human--regardless of age--by means of a secret handshake. Little did Aiden know, a visit to the White House to accept a penmanship award from Barack Obama would have him sitting in the President's seat by the end of the day. "Chalk it up to a case of senioritis on my part," quipped Barack Obama from a Hawaii resort.

This premise fit for a '90s Jonathan Taylor Thomas vehicle hasn't tickled everyone, though. "It's a disgrace," said Jackie Millar, representative for the National Organization for Women. "That bill came from a grassroots movement that started close to a decade ago, and it's a miracle it even passed in the first place. Now Thompson is shooting it down with his poisonous rhetoric? And 'dumb?' I'd like to invite him over to look at my wall of honorary PhDs." Millar chose not to respond when asked about President Thompson's claim that he could run faster than her.

Along with angering women's groups, President Thompson's actions have done their part to strain America's relationship with the Middle East. In a public address to Iran that baffled a nation, Thompson had harsh words for the country: "You guys are real dumb. I have all the Skylanders and you can't play with any of the Skylanders I have. I had them make me a McDonald's in the White House and I eat there every day and one day I ate six hamburgers. But you're not allowed to eat my hamburgers because you already eat poop and drink farts." When asked how residents of Iran would be able to "drink" their own farts, President Thompson insisted their farts are so bad that they could be imbibed as one would a liquid.

Not everyone has been shocked by Thompson's unpredictable behavior. Republican candidate Donald Trump recently referenced the President's address to Iran during a recent fundraising banquet in Flint, Michigan. "I would have invited Hillary Clinton to dine with us, but I didn't," Trump said to a crowd eager to hear his punchline. "That's because she eats poop and drinks farts. And this November, we're going to make sure that's all she eats and drinks!" Despite turning them off their meal of stuffed cabbage and pate, Thompson's words resonated with a room full of Trump supporters, and the "Hillary Eats Poop and Drinks Farts" t-shirts soon became the fastest-selling item in his campaign's official store. "Thompson's my kind of guy," said Trump after the event. "Like him, I'm not afraid of the P.C. agenda trying to take the 'poop' and 'farts' out of my mouth."

President Thompson's mercurial behavior has caused some to sit up and take notice. Crosby Bronson, a professor of Constitutional Law at Harvard, has gone to great lengths to find some loophole that would lead to Thompson's impeachment, but his long nights of research have led to no real answers. "I realize we have an election this year, but the amount of damage this boy has caused our country in just two weeks will take decades to recover from. Frankly, I don't want to live in a country where not being able to 'run real fast' can make you lose your citizenship." For Bronson, this issue is all too common for someone steeped in both the regulation and enforcement of laws. "I'm afraid we're looking at a common case of what we scholars call 'Air Bud's Paradox.' After all, there's nothing in the rulebook that says a seven year-old can't be President."