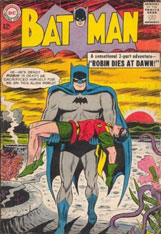 "Swimming Too Soon After Lunch"
Batman #156

Batman: Why didn't he listen to my warnings? How could I fall asleep in the sand after we ate that macaroni salad? Why was he swimming in his costume? Whyyyy?
Crab: (crab sounds) 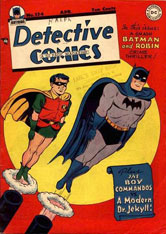 When Batman's eagerness to try out a newly-acquired pair of giant guns gets the best of him, good intentions turn sour!

Robin: Shooting ourselves into orbit with giant guns... wow!
Batman: Yeah, pretty great, right? We'll be in France to stop the Joker's evil plan in no time!
Robin: So is someone waiting for us down there with a net or a mattress, or did you bring some parachutes?
Batman: Robin, there's something I must tell you.
Robin: Yes, Batman?
Batman: I'm invincible. It's been an honor working with you. 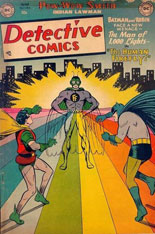 "Day Of The Homo-Ray"
Detective Comics 184

What strange man would harness the power of the rainbow, and for what insidious purpose?

Manman: By simply undoing my belt I have exposed you to the Homo-Ray!
Robin: Argh! I'm suddenly... tolerant of homosexuality!
Batman: NO! Fight it! Fight it with all of your strength, boy!
Robin: I'm trying! But these feelings of... hatred and... fear... are vanishing!
Batman: The cyanide, Robin. Now is the time. 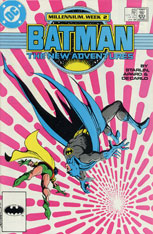 "Batman And Robin Go To A Phish Concert"
Batman #415

What strange band would harness the power of a 45-minute cover of The Facts Of Life theme song, and for what insidious purpose?

Robin: Argh! I'm suddenly... tolerant of hackeysack!
Batman: NO! Those cyanide pills that man gave us, Robin. I think they must have gone bad! I think... I think gravity is much too weak here! Someone hold me down! 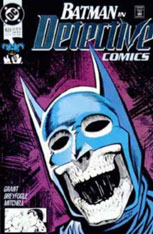 When Bruce Wayne is called away on an urgent business trip to Egypt for two weeks, a replacement Batman must be found lest his secret identity be discovered.

Batman: Thanks for doing this, Dad. I was a little worried you wouldn't fit into the costume, but if anything it's a little big on you.
Thomas Wayne:
Batman: Again with the vase. I was five years old, God damn you!