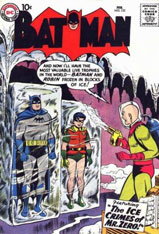 Batman? Stealing? Say it ain't so!

Batman: Oh, come on! It was just ice! You've got a whole continent of it! 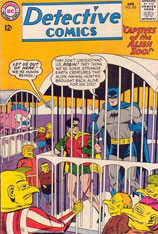 Batman? Stealing again? Surely there must be some mistake!

Batman: Oh, come on! It was just a child with a birdface! You've got a whole planet of them! 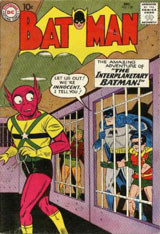 What the hell man?

Batman: Oh, come on! It was just a planet! 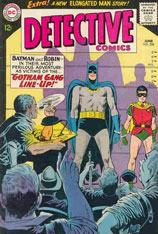 Will Batman and Robin survive the intense scrutiny of a police lineup? Is it really fair for someone to wear a mask in one of these things?

Witness: Let's see... the guy that stole my watch was big, wearin' some kinda dark outfit with a blueish cape and cowl.
Batman: Don't you mean he was small, and wearing a brightly colored outfit?
Detective Wilson: Quiet, you. Just stand still. Sir, do you see your attacker in this lineup?
Witness: Yeah, I think I see him.
Batman: Me too. It's this guy on my left. I'd recognize that devious grin and those beady little eyes anywhere. 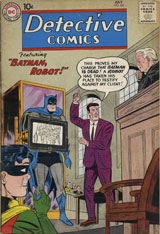 This trial of the century is so incredible, you'll say "I OBJECT to getting so much entertainment for such a small amount of money"!

Lawyer: As you can see in this realtime X-Ray, your honor, my client clearly has ribs.
Judge: And your point?
Batman: I couldn't have possibly stolen that Faberge egg, your honor. Not with all these ribs to take care of! It's a full time job. There would be no time left to plan or execute an elaborate plot to make the Flash dizzy enough to pass out so I could steal the egg in his care.
Judge: Isn't that the Faberge egg right there in your stomach?
Batman: (to Lawyer) The torso defense never works! I can't believe I was dense enough to hire you simply because your name is Lawyer.