Oh, guiding light, from whichever diety you originate, we praise ye!The differences between religions have been a divisive issue since the day the second religion was invented. People live their lives around religions and will nearly always gladly march off to war if their religion dictates it. One of the underlying reasons for this obvious problem is that people tend to only comprehend their own religion. They rely on vague stereotypes and half-truths to inform them about competing religious franchises. It is high time that the hatred and confusion between religions be taken care of.

I have decided to level the playing field by revealing the truths of every religion I can think of without trying very hard. To assist in this effort I have enlisted the help of a number of forum goers who had keen insights into otherwise mysterious and impenetrable religious practices. If you see your own religion mentioned here, please do not get angry that we are divulging the truths about it. We are doing it for the sake of world peace and possibly because I was that fucking desperate for a topic to write about! The solemn Amish have a few dark secrets in their barn.Overview: Millennia ago the Amish were a fun-loving and carefree people who lived on one of a chain of islands in the South Pacific. A series of earthquakes and volcanic eruptions destroyed most of their civilization and the survivors fled to North America where their religion took root with the recently arrived pilgrims. Because they believed the cataclysm that destroyed their island home was a sign of disfavor from the great patriarch Ami, the Amish reversed their carefree lifestyle to become reclusive and extremely serious people.
Fun Facts:

When Amish children come of age they are required to kill a random member of another religion to prove their worth to god. This practice is known as "the bloodening".

When attending a barn raising the Amish will fuss and put on a show of cutting boards and hammering nails, but then when no one is looking they will use ancient Amish sorcery to conjure a completed barn.

Rock and rolling every night is allowed, as long as it is conducted in a solemn manner. However, quiet reflection and hard work must replace any and all partying during the day.

Pros: Tons of beautiful women anxious to have babies, awesome barns, smokin' hot rods.
Cons: The beautiful women are wearing ogre masks and you impregnate them via a glass tube, some of the hot rods just look smokin' but are actually pretty cruddy. Sinister Anglicans gather in the shadows, as is their wont.Overview: This British religion dates back to the 9th century when the British King Ramses IV founded the church to allow him to be circumcised despite having a vagina. Anglicans worship Anglica, or "Better God", as well as a complex pantheon of minor deities referred to as Cerebrates.
Fun Facts:

Anglicans believe that Mr. T subsists on testicles. You may have seen devotional websites to the B.A. Baracus Cerebrate on the Internet.

The matriarch of an Anglican family tosses a small doll filled with stones and itching powder from a first floor window into a crowd waiting below every New Years. It is considered good luck if it strikes someone on the head, thus singling them out for greatness.

Anglicans speak in a form of bioluminescent patterning called "Shiny Talk" that can be confusing but also strangely hypnotic.

If their Tree Of Life should ever die, so will they.

Do not ride bicycles due to supplication-related spinal disorders.

Pros: Services last only a few seconds thanks to the information-dense Shiny Talk language.
Cons: Not a good religion for bicyclists. Atheists are cold, logical, and full of an undying hatred for all things religious.Overview: Formed in 1923 by famed French literalist Pierre Jeanguiome, Atheism combines the better aspects of Star Trek, the Grand Canyon, and Japanese parables for honor in the form of Haiku. Atheists worship nothing and are violently opposed to all deities to the extent that they will frequently be arrested for punching churches and synagogues.
Fun Facts:

Atheists cannot eat hot dogs because they are descended from Christ and therefore do not exist. Turkey dogs are okay as long as their packaging does not depict any religious iconography.

Instead of a Christian Baptism and a cleric, Atheists use liquid nitrogen to dissolve their warts.

Atheists are physically incapable of having sex in the missionary position.

Can smell wild mushrooms quite well and are frequently employed as hogsmen in the braces of truffle hunters.

Because atheists do not believe in the afterlife they decompose into pools of corrosive sludge immediately after death. Many believe that this is because they are vampires, but only a few of them actually are.

Pros: All you can eat pizza.
Cons: Punching a church can cause serious hand injuries. Baha'i is both ancient and unpopular.Overview: Baha'i is the only surviving naturally occurring religion. It was codified several million years ago by a powerful windstorm that etched the various beliefs and mythology of the religion into basalt monoliths. These monoliths are believed to be the original source of all language and human knowledge, but have been discarded by most for other, much cooler, religions and languages.
Fun Facts:

Bi-curious, all of them.

This religion is made up entirely of people who wanted to be Muslims, but couldn't make the height requirement.

At Baha'i temples - or "Baha'i Temples" - no one really knows what to do and most services are spent idling around the room while children play random and discordant music on the sacramental harpsichord.

Eating while lying down is forbidden purely for safety reasons.

All marriages in the Baha'i faith are prearranged and determined randomly by an ancient computer called Abacon.

Pros: You might score a hot chick as a wife in the random marriage assignment, services aren't stuffy.
Cons: No hot Baha'i chicks only bi-curious old Baha'i men. Santa watches over all. Kneel before him.Overview: Originally created as an ultra-orthodox breakaway of Taoism, Buddhism eventually became so popular that all Taoists converted to it. Many Buddhists are pacifists, although sometimes lapsed worshippers of The Great Buddhat are known to kick dogs and spit at children. The iconic prophet of Buddhism is Buddhat Jr. who looks and functions exactly like Santa Claus does in Christianity.
Fun Fact:

With enough concentration multiple Buddhists can merge into a giant Ultrobuddhist. However, the giant will suffer from an increasingly bad migraine until it separates.

Not all Buddhists can shoot lightning. Just the fat ones.

If you cut a Buddhist's arm off he will regrow it. More disturbingly a second Buddhist will grow out of the severed arm.

Before Buddhists can become pacifists they must spend a year and a day wandering the frozen wastes of the north as a Buddhist Berzerker with nothing but an axe and their faithful wolf Ragnar to keep them company.

Buddhist practitioners have their own space station, which purely by chance resembles a gigantic metal Chuck Norris. The Pope is every bit as energizing and dynamic a figure as he was the day he was forged in the Dwarf mines of Mindraggora.Overview: When the Greeks discovered Zeus buried inside the crystal caves of Mount Olympus they worshipped him much like ants might worship an anthropomorphic magnifying glass. Over time Zeus had his powerful message diluted by a bunch of poseurs and hangers-on like Hera, Appollo, and Rick. Catholicism was a breakaway sect of the dying Greek religion and it embraced Zeus as a singular and all-powerful god. The only other aspect of Greek religion that Catholicism kept was the use of Hercules as a foil for the mighty Zeus, replacing him with bold warrior Jesus Christ.
Fun Facts:

Catholics do not eat ham and mayo pita sandwiches because it reminds them of Original Sin.

The new Pope is actually elected by a church-wide game of Scategories.

The Rapture is just a big scare tactic. It's actually going to be awesome, ESPECIALLY for the non-believers.

The Pope's rosaries are forged from the horn of the last unicorn known to exist.

Break a deal and spin the wheel. Wheel of saints that is. Debtors will be canonized.

All of those advanced enough in the Catholic religion learn that the Pope and other higher ups are actually reptilian humanoids descended from the dinosaurs.

Instead of giving live birth Catholics lay eggs. The Catholic Church's resolute ban on abortions stems from a non-competition contract signed with Shoney's all you can eat fried-egg buffet.

Pros: Awesome hats, all the catamites you can eat, a Saint for every season.
Cons: Zeus is fickle, that whole "constant guilt" thing, your children will grow up hating you.

Did you miss your personal savior and Lord on this list? Fear not, sinners! Friday I will bring you incredible revelations about the remaining religions. I've got the scoop on Islam, the 411 on Hinduism, and everything you ever wanted to know about all-encompassing Christianity. Baby, I've got what you need! I've got Mormons, I've got Scientologists, I've got 50,000 Jews on the head of a pin! You can skip over the other heathen writers for the rest of the week, but be sure to come on back on Friday and Father Zack will have the cure for your spiritual woes. Your very soul may depend on it!

Hello, Shmorky for The Flash Tub. here is this week's: 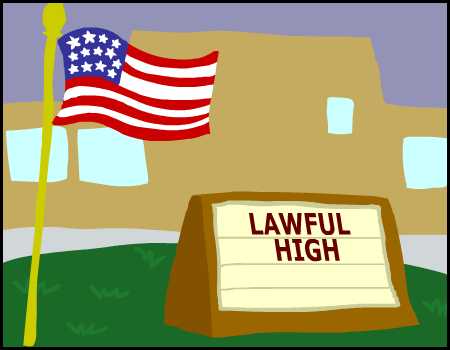 "I heard Greg got some pot from that loser Petey Pounds!"