Holla At: TBONE @ D Block on 2
Askin: shit just come and get it nigga i dont even want to touch it
Niggas word: IS BOND (42 in last 3 months)

yall know that day a while back when the tvs and radios was all playin them weird sounds and the ninja turtles went turtle power and confiscate on a nigga. Took all the little transistor radios, stereos, and took the tvs down off them cages they put em up in to keep us from throwin feces into the speakers.

Since that day aint heard nothin from the outside and aint had no visitors. Startin to get creepy. So I had my clever nigga Short Eye Ted rig up some shit. That nigga will do anythin for some pictures yall clip out of the junior section of a sears catalog. True on that.

So after a piece Short Eye Ted say he got a radio that works, even works so I can send shit on frequencies and say shit to a nigga on the outside. then he said I aint gonna want this radio. And I said Short Eye Ted you sick motherfucker give me that radio and here some jelly I stole from the big eat you put that up on a cheerio and itll be just like a little baby. 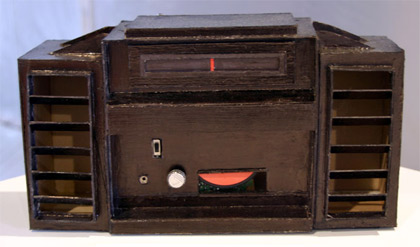 Yo turn out even a child molestin clock be right twice a day. I DO NOT want this creepy ass radio. The main grievance I take with this radio is its unsatisfactionary programming.

It get about ten channels and there is weird ass music sound like it come out a cave made out of crystal or some shit, there some channel thats just things chantin dont even sound like people, and yo, there is one channel that is just some thing growlin. Shit its been so long I would take rush limbow or some shit. The only channel it get with people is this channel where a bitch count in some fucked up language Dan Hitler say is german and then it play a glockenspiel or some shit on a nigga. Who wants to listen to that?

The weirdest channel of all though is this channel where whatever you say into the microphone comes out on the channel, but it come out before you say it into the microphone. when I first put it on I was flippin around and I hear "test test nigga test comin out of lambspoke" and like five day later 9 Pickles is up in my cell and he try the microphone shit and he say exactly that so it play that shit FIVE DAY before he even said nothin.

FUCK nigga you get this shit out of my cell.