Ghost Dog: Way to Piss Off Your Fans 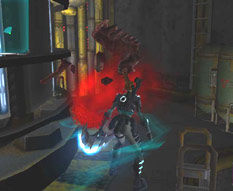 I'm not entirely sure what's happening here but it doesn't look like a Zergling rush to me.If you've been living under a rock for the past 24 hours, or you're a normal human being who doesn't really care about the world of video games, then you might have missed that Blizzard announced their latest development title in a "wacky" publicity stunt. They had headed over to Japan for some crazy Japanese technology meeting and had promised big news. Then the front page of their web site changed to a cryptic count down that included encoded secret messages. The whole thing was ridiculously overdramatic but it did work to catch people's attention, particularly on Something Awful where the goons counted down and sarcastically speculated as to what the title might be.

When time came for the big announcement most people were crossing their fingers and hoping for Starcraft 2, a speculation reinforced by the vague references to Starcraft in the encoded messages. If you've never played Starcraft before imagine monopoly but instead of a top hat you have aliens and instead of properties you have different aliens and instead of money there's tiberium or something. It's really popular in Korea I guess. After a brief and frustrating server overload on Blizzard's site, it reappeared with an announcement and a new web site for their next game entitled "Starcraft: Ghost".

Today at the Tokyo Game Show Blizzard Entertainment announced its newest product under development, StarCraft: Ghost. In this 3D tactical-action console game set in the legendary StarCraft universe, players will take the role of Nova, a lethal Ghost operative trained in the arts of espionage and tactical combat.

The feeling of intense disappointment in the air was palpable. Then came the rage. People ranted that it wasn't just "not Starcraft 2" it was a console game that extended and no doubt ruined the franchise. While I'm not a huge Starcraft fan I have to admit that I too felt somewhat betrayed. Blizzard has developed for consoles in the past, but it's always taken a backseat to the home computer market and the games were just reworked versions of ones that had already been released for the PC. "Starcraft: Ghost" is a full-blown console-only game, and boy does it look console-riffic! A third person view, nothing but action, and a curvaceous female character that looks like she stepped into the game immediately after shooting her latest Revlon commercial. Blizzard has never shied away from selling their games by including a fair amount of masturbation fantasy material. Even Warcraft III had its share of scantily clad women for all those nerds who frequently have to yell for their mom to come downstairs and get their penis unstuck from their computer's power supply fan. But think of it as insult to injury, the Lara Croft that broke the camel's back. 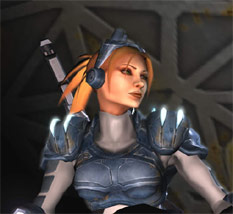 Memorize her features and prepare to read a description of them in over 500 pieces of horrible erotic fanfaction coming to a Geocities Web Site near you!Blizzard is one of the last developers that cater to the PC market almost exclusively and their fan base is obviously rooted in this market. As more developers shift to making console games fewer people will be working on PC games. Consoles are proprietary hardware platforms and as such the companies who manufacture the hardware are able to place constraints on the software that is produced for their console. They can reject games completely, enforce censorship, or otherwise require game developers to conform to their vision. When was the last time you played a console game that included nudity? Anyone remember Nintendo's ridiculous censorship of the Super Nintendo version of "Mortal Kombat"?

That said the backlash Blizzard is feeling and will no doubt continue to feel over this title is somewhat unjustified to say the least. Blizzard has one of the best records as a development house for not releasing shitty games and putting out an incredibly high percentage of rock-solid hits. It has to be difficult for them to look at their success in the PC market and then realize that if they were releasing the same titles on one or more of the consoles instead they could be selling five times as many copies. They are part of a trend among developers to make the leap from PC to console development. They say they won't abandon their PC projects, but when the money starts rolling in I wouldn't be surprised if they begin to reallocate their development resources. It's understandable but very unfortunate for those of us who use our computers as our gaming platform of choice.

Bad news, certainly, but according to some inside sources I have at Blizzard, "Starcraft: Ghost" is just the tip of the iceberg. Apparently Blizzard has plans to go "console only" by 2006, and its current and still secret lineup of games is almost entirely geared for consoles. I may get my friend fired, but in the hopes that Blizzard will reconsider their market strategy I am going to reproduce the entire list of titles here. Then I may go make one of those online petitions for people to sign and just before I submit it to Blizzard I will change the petition from "Sign this petition if you think Blizzard should concentrate on PC games" to "Sign this petition if I agree to be a slave to Zack 'Geist Editor' Parsons for one year".

Warcraft Jams
Release Date: February 2003
Description: This is essentially a street-savvy basketball game with half-court and full-court modes and eight teams drafted from the ranks of your favorite Warcraft III races and characters. Each team has three superstars capable of executing up to four different slam-dunk maneuvers including the Dreadlord Maximus and his B-Bone B-Ball and Adian Lightbringer and the 720 Slam! Also includes a season mode in which you can draft both Warcraft characters and real life players to create the ultimate dream team!

Lich King Kart Racing
Release Date: First Quarter 2004
Description: The Lich King is back and this time he's bringing a wide selection of nitro-burning funny karts for you and your friends to race! Go up against the Lich King and his undead legions or play head-to-head against up to three other players in split-screen mode. Each of the karts is fully upgradeable in between races and keep your eyes peeled for power-ups that will give you an even greater edge when burning up the track. Drop that banana peel at just the right time to cause your opponent to spin out or fire a gimmicky version of a rocket at the guy in front of you and regain the lead. 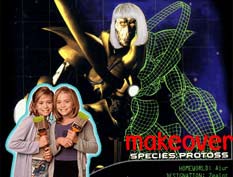 I CAN'T WAIT UNTIL THEY TURN EIGHTEEN HAHAHAHAH THAT JOKE WAS NEVER FUNNY! For serious.

Capcom vs. Marvel vs. Diablo
Release Date: Second Quarter 2004
Description: Choose from one of 750 different heroes that are almost identical in this fast-paced 2D fighter! Characters include Ken, Ryu, Blanka, The Incredible Hulk, Iron Man, Galactus, the necromancer, the assassin, and many more! We have crammed in so many characters you might have an aneurysm just trying to make them out on the selection screen.

Mary Kate & Ashley Olsen in "Protoss Makeover"
Release Date: Christmas 2003
Description: Those two scamps are at it again, this time giving Protoss Judicator Tyrel a makeover for his hot date. Playing as Mary Kate and Ashley you have to collect the items required and combine them to make Tyrel look like a million bucks. Look out, evil Zerg Overseer Morgus has hidden items like the hairbrush and eye-shadow behind puzzle doors. Match wits against fifteen challenging puzzles and see if you can unlock the doors and earn Tyrel a kiss on the cheek from his date! Tyrel will be voiced by N-Sync crooner and heart throb Lance Bass.

After reading Blizzard's scandalous release schedule I have come to the conclusion that they are indeed selling out, those utter assholes. By the way, look for some new upcoming ad campaigns on Something Awful and please click our banners to help keep us eating caviar out of gem-encrusted chalices.

Livestock here to tell you that there is a new Photoshop Phriday up and ready for viewing. This week's theme is "Product Placements," but don't think that it's anywhere near as simple as it sounds. The Goons got busy and inserted products, company logos, mascots, storefronts, and more into a variety of movies, historic pictures, and pictures that are of things that are not historic but still fully visible to the naked eye. 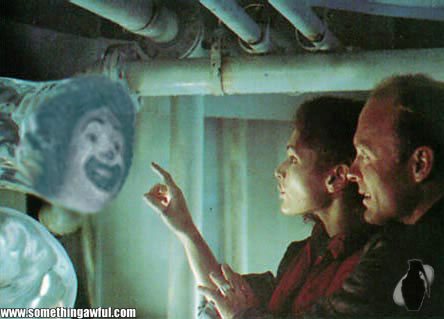 You aren't getting any younger so you might as well read this Photoshop Phriday before we're all dead.