Louisiana is Invited to Drown in a Sea of Hot Tar 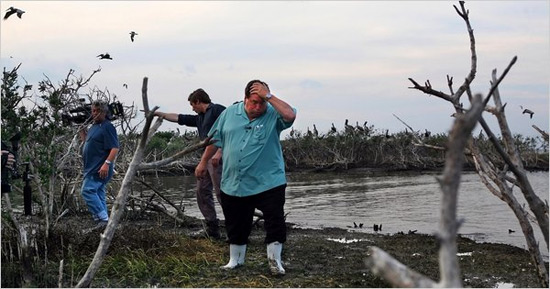 That fat guy in the cowboy boots acting distraught is Billy Nungesser, the high muckety-muck of Plaquemines Parish in Louisiana. You've probably seen him overflowing a split-screen on TV and crying about the ruination brought to his state and parish by the Deepwater disaster. According to financial disclosure forms, Cryboy Boots up there is a longtime friend of the oil and gas industry and in return for all his friendship BP has thrown a property he owns a lucrative deal.

If I see one more parish wizard like Nungesser on TV complaining that the President didn't call him personally and wish his three volunteer firefighters good luck chasing down a seagull covered in tar while he has spent his whole career profiting from the oil industry, I am going to, well, do nothing, but a hyperbolic overreaction is deserved. These sweaty, red-faced fat guys come on Anderson Cooper's tight shirt show every night with a new thing that everybody needs to be doing. They cry about not having enough boom, they cry about berms, the boom not working, and they cry that Janet Napolitano hasn't brought in Dutch skimmer ships to do donuts in their offshore swimming areas.

My apologies if I sound callous or dismissive, but it is becoming really easy for me to be dismissive of Louisiana. A recent Public Policy Poll of opinion in Louisiana showed that 77% to 12% support offshore oil drilling. In another poll a majority was against a deep water drilling ban that affected 30 out of over 3,000 Gulf oil platforms. Heck, I even think deep sea drilling expert and country western singer Trace Adkins is going to write a song about moratoriums.

According to recently leaked BP documents there are infinity plus one barrels of crude oil being shot into the Gulf of Mexico every day and washing up on Louisiana's coast and ruining shrimping, oyster farming, tourism, and all of the related industries. Louisiana has been given the real life version of the sort of overbearing object lesson you only find in Tom Clancy novels. This is their version of Chinese Muslim terrorists hacking into the US power grid and exploding every appliance because liberals had too much freedom of speech.

People like to use the phrase "teachable moment" these days. This isn't even a teachable moment. This is one of those moments where the teacher is redundant. Nothing they could say would make the lesson any better. That is exactly why I welcome Louisianans, particularly the 77% strongly in favor of offshore drilling, to go ahead with offshore drilling.

They're so gleefully intent on ruining their state that I almost hate to break it to them that not drilling those extra wells isn't going to raise gas prices. Gas prices aren't real anymore. They're prone to speculation and trading, which means they fluctuate largely independent of whether or not some oil well that might produce one one-thousandth of a percent of domestic production gets dug in the next year.

Louisiana isn't the only state facing the consequences of the Deepwater Horizon oil spill. Florida, Alabama, Mississippi, and parts of Texas have seen tarballs and dead animals. Some of these states support offshore drilling (Texas) and some don't (Florida). My proposal to deal with this is simple: take all of the resources for cleaning up the oil spill and skimming the oil and protecting the coast, all the booms and skimmers and oil blimps that the parish divas are crying about, and deploy them to the states that don't want offshore drilling. 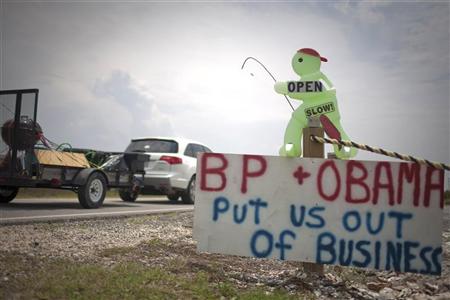 If your population and your government wants to risk exploding oil wells, wants to ignore a lesson this epic, not to mention continue to risk another leak while all of your disaster resources are occupied dealing with the one currently happening, then you should forfeit the right to assistance and sympathy. Not out of spite, but as a practical measure.

Lecture me all you want about the need to drill a million oil wells at the bottom of the ocean and the heroism of roughnecks risking life and limb to make huge amounts of money. Talk to me about the majestic beauty of the swamps and the brown heron and the bayou culture. Call me a cold-hearted Yankee sonofabitch. I get it. It bums me out too every time I see some horrible turtle flapping around in the middle of oil apocalypse 2010. Unfortunately, if a bird or fish or crab lives in the coastal waters or on the beaches of Louisiana, they're doomed. They might get brushed off by some guys in Hazmat suits this time, but their grand kids are going to be soaked in oil next time around.

If you want the mess, we can't stop you. If your desire for a few more roughneck jobs is overwhelming, I invite you to transform your patch of the world into a polluted industrial hellscape of inhaled toxins and carcinogens and dead, stinking beaches. We'll be needing all the boom back, though. Florida has some great spring break beaches to drunk drive on in a rented Sebring convertible and they don't want to take the risk of ruining it. I don't think I need to tell you I won't abide that prime habitat getting destroyed.