"Detective," sighed the small man at the door. "Thank goodness you're here. Please, come inside."

A fancy dining table stood at the center of the studio apartment, surrounded by a loose circle of cameras on tripods. Small groups of oddly dressed people spoke in hushed tones to one another, eyeing me with apprehension. Some wore modern clothes, some seemed to have stepped out of the 1930s.

The patrolman at my elbow urged our host to continue as I continued my visual sweep of the room.

"Well, it's complicated," said the small man, licking his lips as his oversized head swiveled between us, unsure who to address. "I'm directing and starring in an independent film. It's about a group of television actors who are also spies, all of which are attempting to work on the same show while figuring out which of them is a jewel thief. The television show they're all working on is actually a front for the mob. They are taping an episode of the television show in which all the characters are taking part in a dinner play, one of those murder mysteries. The murder mystery is about a group of people at a murder mystery dinner party who discover a real body."

"That all sounds very... huh. Why have you called us out here tonight, sir?"

The director frowned, averting his gaze as though ashamed.

"It feels like some sort of actual crime might have been committed in the middle of all this. We're just not sure what it was."

I blew my cheeks out and produced a small notebook. "Before we continue, I'd like to get your name." 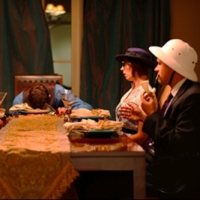 He gave me several. Gavin Proctor, Lane Ziggen, Raul D'Romantico. I nodded as if I understood which was his real name and which belonged to his characters. Getting the facts wrong is more helpful in an investigation than you'd think. Many a case has been solved at the outset by reading everything I had written about a suspect aloud, letting them correct me on every detail, including the line that said "did not commit the murder".

"I couldn't help but notice your cameras. Those aren't the oversized film jobs that you see in movies, they almost look like regular old still cameras on tripods."

"Good catch." Gavin Proctor nodded. "Our cameramen are also actors. We're on an extremely low budget, so everyone performs several jobs. Our lead actress is also our first aid technician, key grip, and the supporting actress in the television show. They set the cameras on timers then jump into the scene and hope for the best."

"Oh goodness, no. Each camera takes one picture every second. Films are typically projected at approximately 24 frames per second, so we duplicate every picture 23 times, then move them slightly up and down or right and left, depending upon what the mood of the scene calls for."

Two more officers arrived at the front door, wheeling in the Clue-O-Tron. The hulking robot was a marvel of investigative technology which just happened to have been designed and built by yours truly. Forget fingerprints, zoom and enhance, and DNA testing. The Clue-O-Tron was the future.

After several minutes of careful maneuvering, the Clue-O-Tron stood in the center of the apartment, his head gouging a hole in the ceiling that trailed back to the ruined doorway. At my signal, the uniformed officers yanked at the chainsaw starter cords on the robot's ankles. The Clue-O-Tron rumbled to life, billowing thick clouds of greasy black smoke as he repeated his neverending mantra of "SEEKING CLUES".

Clue-O-Tron stomped around the room in wild fits and starts, occasionally walking against a corner. His torso continually spun in a blur, extended arms raking objects and walls alike with thirteen inch claws. Downward facing blowtorches in his kneecaps roasted every inch of the floor that his massive iron feet failed to stomp into an unrecognizable mess.

In time, Clue-O-Tron ran out of gas. One of the officers gingerly made his way to the robot's print readout, analyzing the data to see if any clues had been uncovered. He met my eyes and frowned, shaking his head. Damn it. One of these days my robot would actually find a clue. One of these days.

"Bring in the secret weapon," I growled. Moments later, a steel barrel was carefully brought into the room.

"What in the world is that?" Lane Ziggen's eyes widened as he took in the assortment of warning stickers affixed to the barrel.

"Have you ever seen lemon juice reveal a hidden message? That's the acidity. This stuff is the most acidic substance known to man. If there's anything to uncover, we'll find it."

With that, a uniformed officer tipped the container over and ran for the hallway, his fingers pinched across his nose and his mouth held shut.