Don't Fly During The Holidays

Your Lousy Christmas Tree Was Sucked Into the Plane Engine

I have been lucky enough to celebrate my most favorite and beloved activity this holiday season, an event which really puts the "Jesus CHRIST I'm going to kill myself" into "Christmas." If I remember my Bible lessons correctly, Jesus died for our sins, so in the spirit of the holidays, we should all be stressed out and frustrated to the point where we want to die as well. This is the "true" spirit of Christmas. The Bible taught me many important things along these lines, such as if I don't learn important things from the Bible, I will probably end up roasting in Hell for all eternity or 40,000 miles, whichever comes first. 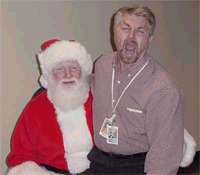 Anyway, I voluntarily decided to suffer this Christmas for the massive amount of sins I have racked up. Since I wanted to find the quickest, easiest, and most painful way to rack up the hurting, I did what anybody would do to if they had a deathwish: I chose to board an airplane within 180 days of Christmas day.

Yet despite this single rule, I continue to engage in air travel around Christmas. Why? It is one of those mysteries nobody will ever know, like how those orange circus peanuts ever got to be popular.

The airport scene during Christmas is just nuts. Thousands and thousands of cranky, irate, short-tempered travelers trying to get from point A to point B despite the airlines' nonstop attempts to send everybody to a mysterious point C which exists in a city hundreds of miles from their destination. Airline officials, who have slowly grown insane from having to work in an airport every day, have decided to implement a "random destination" program which ships off travelers to random points across the globe, many of which are still believed to be mythical. Usually this is either Denver or Atlanta, which are apparently the Meccas of airline civilization and house over 15 billion people in their newsstands alone.

So I arrived at the John Wayne Airport (which was named after popular Hollywood screen legend Charlton Heston) Saturday, ready to board a plane headed to Kansas City, Missouri. My flight itinerary, which was written up by a lady who was mentally unable to successfully spell "creek" after three attempts, claimed my flight was due to depart at 11:45 am. As you can imagine, I was slightly unnerved to arrive at the airport and notice that "11:45 am" apparently now meant "2:50 pm", especially since I had a connecting flight scheduled at 1:30. I brought this up with the ticket agent, who seemed nonplused by my predicament.

I almost reached across the counter and began choking the lady with her own laminated keychain card while screaming "THEN WHY THE HELL DID YOU BRING IT UP?!?", but I was suddenly pushed aside by an obese woman carrying 37 screaming children and 38 Christmas packages featuring the WWF's finest wrapping paper. Then I was swept down the hallway by a crowd of 500 people, who despite having plane tickets clearly stating which row and seat belonged to them, felt the need to senselessly rush towards their gate door as if Delta was giving out platinum cellphones.

Needless to say, it's now around midnight, the day after my plane was supposed to depart, and I only recently got into Kansas City. I'm cranky, cold, and tired. I came home to learn my forums were down once again, just like how they go down every six hours, so the eFront technical woes continue. If I had one of those cyanide-tipped molars, I'd be popping hard candy by the ton right about now. I don't think I can get any further into the Christmas spirit than that!

In the spirit of the holidays, grizzled seasonal veteran Cliff Yablonski has updated his site with six new pages of people he just really can't stand. At all.

merry fucking christmas, you lousy little prick. my gift to you and your idiot readers is six pages of people I will personally kick the shit out of next time I see them at Krogers. choke on that, moron.

Get in the Christmas mood and check it out!

Levelord - They are NOT hallucinations! People love me!

Okay, okay, let's not get unprofessional here, we both have a job to do, so how come you haven't asked THE question yet?

JEFF K!!! - what si teh BIG QUESTIAN? I keep asking you questians and all I get is GIBBERISH and yuor teh worst intarview evar, even worse then Jake Simpson (START TRACK L33T FARCE guy).

Levelord - "What's it like working so close to a gaming god like the Levelord?". Everyone always asks me that.

JEFF K!!! - I KNOW WHAT ITS LIEK TO WORK WITH LEVELAORD

ITS LIEK WORKING IN A PETTING ZOO

And even more chocolatey goodness where that came from... so enjoy it!

A Very Taco... Something

Taco the Wonderdog is more than ready to celebrate the holiday season, and as proof, has created an "AMAZING FOURTH OF JULY SPECIAL" Flash movie. Hey, I never said WHAT season he was celebrating. Today's entertainment value features exciting music from Semi Automatic Turban, which is even more reason to check it out. And yes, I am assuming you have an incurable brain disease.