The Frothing Fables of Groggery Gibbonman

"In particular, one voluminous edition of Gibbonman's fables was so coveted that several battles of the Spanish-African aerowar centered on the recovery and re-recovery of the only known complete set. After changing hands no fewer than eight violent times, the books finally returned to England, where their rare uranium inks were successfully nullified." -Shelber Ashos, The Cloudquistadors: For God, Glory and Gravitons 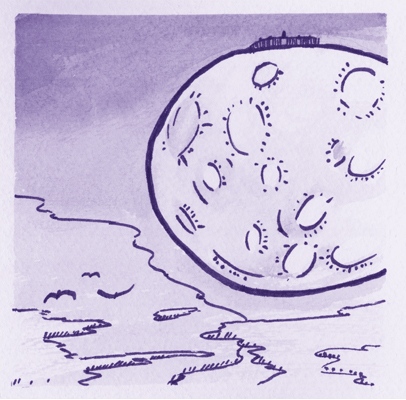 Once, as ponderously past as past can be, high atop the salty ocean skies, three bored gulls rolled lazily on the currents and gales. They had long explored these rocky shores, and even seaside views that would inspire any man were hum-drum to their jaded eyes. So it was that the gulls decided to explore someplace new entirely. The target required no major discussion, as it was obvious to all involved: Clearly, they should fly to The Moon.

Through the clouds and up the blue, the gulls climbed, feathers tight against the cold. Though exhausted they dared not stop, and finally they reached their goal. "Hooray!" the gulls cawed to each other, heaving between breaths. "We have arrived!"

And what a place it was at which to arrive! For here, atop The Moon, at the very tip of the sky's roof, there was an incredible temple, the pale-pillared home of Luna. In her great halls rose the selenite throne, upon which the Moon Goddess sat, and all the winged creatures flitted about her in a flying dance, delighted by her light and beauty.

"Incredible! Marvelous!" squawked the gulls in cheerful unison, and they joined the great festival of wings with vigor. But this did not go unnoticed. "Oh hell," said a great owl to a hummingbird moth. "Who invited the gulls?"

Being wise and, like all owls, well-versed in ballroom etiquette, the great owl finished his dance, waited until an opportunity presented itself, and pulled one of the gulls aside.

"Why didn't anybody ever tell us about this place!?" the gull screeched into the great owl's ear. "This party is amazing!"

"Quiet, you idiot!" chastised the great owl. "You three need to leave before ..."

But it was too late. The other gulls had already begun to let their excrement fall where it may, which happened to be everywhere. Needless to say, the Goddess Luna was aghast, and all winged creatures were banished forevermore from social events on The Moon.

"What are you guys doing tomorrow night?" asked one of the gulls as all the winged creatures flew back to Earth dejectedly, but nobody responded. This awkward silence lingers, alongside their banishment, to this day.

The moral of the story is: Do not invite incontinent friends to parties. 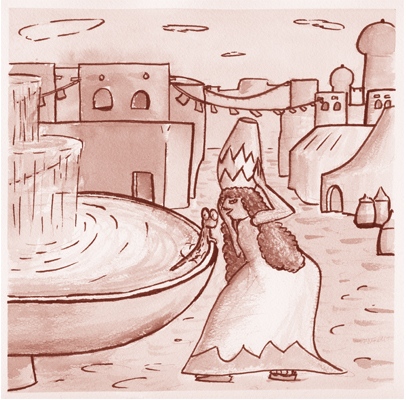 Great, greedy helpings of ages ago, in a valley that had once been a mountain and is again a mountain today, there was a busy little village of stone and straw. The people of the village were happy, and their carts rumbled through the markets with purpose and joy.

As a rule folks were friendly in the village of the valley, but there was one beautiful maiden whom everyone adored most of all. Though, as is often the case for beautiful maidens, not all who saw her were kind. As she carried water from the fountain to the market each day, she encountered many admiring onlookers, and, alas, one leering Salamander.

"Oh beautiful maiden!" burbled the Salamander, who lived among the fountain's coins and tiles. "You look ravishing! I should like to ravish YOU, if you follow ..."

But the maiden rolled her eyes and filled her water vase, unperturbed. Across the town she ambled with grace, and the market's thirst was quenched. The sun climbed, and when the maiden returned at noon for more water, the Salamander was no less scandalous.

"Beautiful maiden!" he slurped. "Your hair is so shiny and colorful, and it curls so tight! Do tell, do tell, is ALL your hair so ... if you follow?"

The maiden merely scoffed, and with her water vase filled again she left. But soon the bazaar's thirst rose once more, and with a sigh the maiden returned to the fountain. Just as she knew he would be, the Salamander was waiting in the long shadows of the sunset.

But before he could finish, the maiden interjected. With her lips just a tight-curled hair's length from the Salamander's head, she whispered, at great length and in graphic detail, about what she'd done the previous night with the blacksmith, and how a blacksmith's body is functionally and irreconcilably different than a Salamander's in important ways.

" ... if you follow" she finished, then she filled her vase and took her leave.

The Salamander, after a thought, burst into flame underwater and was extinguished.

The moral of the story is: Blacksmithing is an attractive trade. Be a blacksmith. 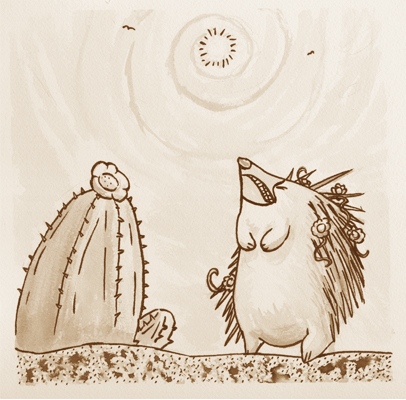 Wide ago and long away, in a desert as vast as the sky is tall, there grew a short little cactus. It sported a prickly coat of spines, sharp and not a friendly sight, from the sand up to its crown, where in place of hazard was a perfect flower. It was gorgeous and delicate enough to beg the attention of any traveler, though none had happened upon it. But that would change.

“What on earth!?” exclaimed a passing porcupine, quills bristling at the sight of the cactus. She had never seen a porcupine (as she perceived it) wearing a lovely flower, and she found the look so fetching that she became angry she hadn’t invented it herself.

Not to be outdone, the porcupine scurried back down the road to a flowering vine she had nibbled on that morning. She rolled in the vine until her quills were festooned with blossoms, and then, in her showiest gait, she paraded her splendor for the cactus to see.

“Of course you CAN just have one flower, but I say it’s best to have MANY flowers!” said the porcupine to no-one in particular as she strutted, snout thrust high with pride, past the stoic cactus. She reiterated it a few moments later as she walked back, unsatisfied by the cactus’ cold response. After a few more tries, the porcupine stopped and stomped.

“You think you’re so much better than me!? I can stand up straight and tall too!” said the porcupine, and to prove so she did. Her brow furrowed as she focused on competing at inanimation. Tense moments passed.

“There’s nothing you can do that I can’t!” growled the porcupine through her teeth, even though her eyes stung with sweat and her quills ached from entanglement.

But the cactus held firmer still.

Finally the porcupine could take little more, and her will began to weaken. Just then, an enormous eagle, which had been tracking this poor prey from a lofty vantage, swooped down and struck ...

The moral of the story is: It pays to act strangely.