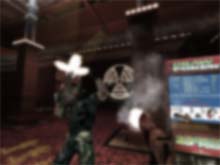 Someone isn't using a wonderful nVidia 3d card.The "news" is pouring in from E3 as game journalists from across the globe drool over screenshots and video clips, forgetting somehow that most of these people are the same vaporware kings that lied to everyone last year. I'll admit, despite yesterdays rant about the hype monster, I am starting to feel my own excitement grow over a lot of the stuff I am seeing at sugarshacknews.com. They released a video clip of the new Duke Nukem game and it sure looks blurry! I am really disappointed in the folks working on the project, it ran in 320x240 mode and had terrible pixilation, and if this is any indication of what the final game will be like there is no way I am buying it.

One game which is strangely absent from any headlines is A GODDAMN SEQUEL TO RIVER CITY RANSOM. You may be thinking "Zack, shut up, you ran this joke into the ground yesterday", but it is not a joke at all my friends. This is probably my favorite console game of all time. It had great character development, a gripping and Byzantine plot and the action really pulled you into the game. The reason I am mentioning it again is that I received a forwarded e-mail from a fellow RCR fan and Something Awful reader who had contacted Atlus U.S.A, the makers of River City Ransom.

I'll spare you what my new best friend Seth had to say to Atlus and just let you read their response.

Thank you for your inquiry.
Unfortunately, we do not have any official plans at this time for River City Ransom on any home console. But, we will definitely keep that in mind if the demand for it becomes significant.

Not the best pic to get you guys motivated.

I guess what they are trying to say is that Seth's demand is insignificant, but what about my demand and YOUR demand? Let's all send Atlus a nice friendly e-mail telling them how much we loved the original River City Ransom and how much we would like to see a sequel. Let's explain to them that we not only adore their game, but would like to have it made for every platform, have movies made and possibly also several erotic novels based on the characters. Together we will rise up and make the "demand for [River City Ransom] significant" Atlus U.S.A., and you will be forced to release game after game in the RCR series.

I think we can achieve this goal, especially since Atlus is already making Super Dodge Ball for the Game Boy Advance.

A Dread Force Has Risen Through Time

That's right folks, State Og has returned after many months to update all of us with the latest news on their delightful corporation. It would appear that recently they have been up to a little filmmaking.

Most of our projects are in post production. Our director has been former African dictator Sebastian "Big Prince" Mokali, who we worked with on last year's haunted house to raise funds for our charity organization "Money for State Og and Former African Dictators with the Last Name Mokali". Our cast of talented actors has been three confused Japanese people we kidnapped from a tour group along with all the vagrants and hookers we could force at sword point to act.

Read it! They know where I live and if at least 50% of our front page traffic doesn't spill over into State Og territory they are going to cut my thumbs off. Do you know what that means? No more one-handed revolver cocking and no more hooking my thumbs in my suspenders and thrusting out my stomach while I walk around the news room looking important. Oh well, no big loss, I don't ever do either of those things. Although, I am a really big pussy and pain scares me, so read it.