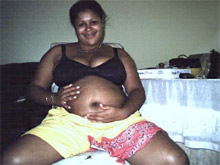 The equation: fetus plus you equals person times twoAccording to CNN, those crazy fetuses are at it again, busting into the headlines with their sassy shenanigans. Apparently a woman was giving birth and the doctor accidentally killed her and her unborn child (using a shotgun to induce labor doesn't always work as planned). Naturally, her husband tried to sue the pants off Dr. Double Barrel. Luckily for almost everybody involved, the Arkansas legislature was on his side and the state Supreme Court ruled in his favor.

Later that year, the Legislature approved a law specifying that an unborn fetus could be considered a person for some purposes in criminal law.

Now that fetuses have officially achieved the status of "person" for "some purposes", I hope that at least one of those purposes will be visiting Something Awful on a regular basis. In an effort to woo the all-important fetus demographic, I am going to devote the remainder of this piece to fetus-based interests. For the six of you still reading this, I hope you are fetuses because otherwise you're not going to get a bit of useful information out of all of this.

The most important part of becoming a true "person" is finding gainful employment. Luckily, the job market is wide open with opportunities for an enterprising fetus such as you! Your good looks can get you quite far, but they can't get you that cup of nutrient-rich blood you desperately need to drink in order to survive. Sure you could stalk the night preying on unsuspecting teenage lovers at Lookout Point, but that is slightly against the law and as a person, you may find yourself behind bars. Do you have any idea what they do to fetuses like you in jail? That's right, a big fetus will make you his fetal bitch.

The first step to finding a great job is getting a good education. Follow a path in higher education that caters to your specific abilities:

Once you have received a degree in your chosen field, it's time to put together your résumé. It is important to carefully embellish when you do this. Sure, it's alright to stretch the truth a little, but don't lie; just put a creative spin on the facts. "I worked for two weeks growing fingers" can easily become "I have firsthand experience in the science of physiological development." I'm sure you're now asking yourself "but what jobs are right for me?" I'm glad you asked! One of the most popular fields for fetuses these days is the high-paying and rewarding world of architecture!

Meet Keith. Keith is an 11-week old fetus and he happens to be the chief industrial architect for Chase & Lowry Associates, a major construction firm on the East coast. He attended Yale and earns in the mid six figure range these days. He has a lovely wife Penelope and two daughters named Anne and Jane. He drives a Mercedes and flies to Chicago at least three times a year to catch a Bulls game. He doesn't have to hunt for his blood, he orders it on the internet.

FUN FACT: Keith once competed on "Jeopardy!" Although he didn't win, he had a "blast" being on national television.

Meet Roger. Roger didn't go to college. He has no job and lives on the streets of Los Angeles. He finds money where he can, sometimes begging for spare change or selling his body to anyone willing to pay. He also frequents a transvestite night club where he gets men to give him money for a few turns on the dance floor. Like all fetuses, Roger has a talent for ballroom dancing, but unlike Keith he did not chose to pursue a career by seeking a good education.

FUN FACT: Roger once won a local dance marathon, staying upright with his soft-shoe partner for over 35 hours. Sadly, he blew all the prize money on cheap blood and hookers.

Now that you are a person, you will be facing a lot of challenges you're not used to. It may seem overwhelming at first, but with a little luck and a lot of hard work, you can be a hero like Keith instead of a zero like Roger!

Something Awful at E3

In case you missed out yesterday and somehow can't figure out how to scroll down below this post or click the link at the top of the page, Rich went to E3 and has put together part one in a more than one part series about E3. You can check it out by clicking right about here.

Wow! Finally, a game that combines day care, the paranormal, and Mortal Kombat! I noticed the fact that Oh Ghost Baby predominantly featured an image of a child kissing a gigantic grinning sperm from Heaven, so I had to ask the Saint Hermit Studios representative for more details regarding this fabulous product. Unfortunately, she didn't speak much English, so my interview left me feeling somewhat unsatisfied.

All kidding aside, I am more excited about Oh Ghost Baby than any other game shown at E3. I am going to constantly e-mail radio host Art Bell with messages about this exciting development in the software industry. At least until he calls the police. Again. That guy has no sense of humor.