I had a swell birthday party on Friday. The events included:

1) Receiving a cake which featured a man's gaping anus plastered across the front of it,
2) Being publicly humiliated inside a restaurant which has wagon wheels, airplane propellors, street signs, and various other stupid trash nailed to the walls. You know those kinds of places, like TGI Friday's or Applebees or one of the other 10 million joints that look like somebody's barn exploded and all the shrapnel stuck to the walls.

The birthday celebration was so darn exciting that I don't want to ever speak of it again. Ever. If anybody brings up the topic, I will choke them to death with their own large intestines. 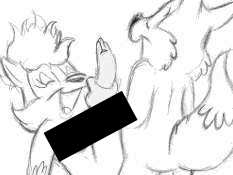 I hate the Internet.After I had slowly finished weeping and praying for death that night, my mind naturally progressed to thinking about this website, which often causes the same effects. I began to count the various accomplishments and awards I've received in the 18 months that I've run this site. Hours later, after failing to make it past "1", it suddenly dawned on me; there's been a gaping void in this website ever since its conception (besides the piss-poor writing and shoddy content). Sure the daily updates have been tremendously entertaining and intelligent, often featuring the word "ass" more times than all proper nouns combined, but something had been missing. Something intangible. Something deep. Something chocolatey. After consulting the magic genie in the bottle, who only appears in the last beer of a 12-pack, it suddenly dawned on me: erotic fan fiction.

As anybody who has ever used the Internet knows, anybody who has ever used the Internet has severe psychological problems. The pinnacle of these mental issues is evident in a phenomenon known as "erotic fan fiction." You see, the Internet supports and encourages people with the most scrambled neural patterns to publicly develop and nurture their intensely frightening fetishes. It's like a freak amplifier, where all your most psychotic tendencies are ripped out of your skull, inflated with a bicycle pump, and then crammed back into your brain just in time for you to hear the cheery "you've got mail!" alert. In this regard, the Internet is completely unlike "real" life as we know it. For example, take this example to exemplify what I'm saying:

BOB: (At work) "Say Jack, did you catch the Mets game last night?"
JACK: "No I didn't, Bob! I was too busy beating off to nude pictures of 'Chip N Dale's Rescue Rangers'!"
BOB: "Jack, you're fired. In fact, I'm going to go one step further and violently stab you to death with this broken flower vase."

That fantastically realistic conversation proves certain interests and pastimes on the Internet do not carry over into real life very well. This is because, generally speaking, absolutely 100% of everything on the Internet is a sick, twisted, disgusting car wreck of failure and wasted lies. Now let's see how this conversation would go if it were online:

It should come as no surprise to anybody that this site's black hole of a soul could be directly attributed to its lack of Internet-like qualities. In fact, I would even go out and claim Something Awful has been very anti-Internet in its past. I realized that I needed to fix this grievous error and get SA back on the "fast track" to success, because as God only knows, the only way one can measure their penis size is by obsessing over something as critical and important as their website's traffic stats. With this in mind, I have taken the next natural step with this site: erotic fan fiction starring SA's robotic sensation, The Molestinator.

"Summer Passions"
Starring THE MOLESTINATOR and TITTY McBOOBIES.Titty McBoobies pulled up to the Stop N' Chomp gas station. She drove a car which was long and shiny. You know, like a penis. Except shinier. And longer too, I guess. She got out of her car into the blazing hot Winnipeg heat.

"Oh my, it certainly is hot today!" Titty McBoobies remarked while pulling out a handkerchief and wiping the glistening sweat from her glistening brow. "I'm so hot that I'm sweating! And I'm wet from the sweat! All wet, baby!" She then pulled out the unleaded gas nozzle and very gently rammed it violently into her gas tank, uh, hole thing.

"Oh baby! Fill me up!" she shouted while pulling down her panties and rubbing her moist crotch against the bumper. McBoobies hadn't screwed a man in over 13 seconds, so she naturally couldn't contain her animal-like lust any longer. She began to moan and shudder orgasmically, almost as if she was having an orgasm. After climaxing nineteen times, she realized that she wouldn't be able to do the job herself; she needed a partner to satiate her carnal desires. She pressed the button to call on the service attendant and waited for him to arrive, spreading and contorting herself into a sexual position that required at least 90% of her body to be double-jointed. The door to the gas station opened and out rolled The Molestinator, one of the newest WorkBot robots to join the elite gas-pumping job force. Titty McBoobies had heard of these robots before, but was unprepared for their raw sexuality.

"HONK HONK! Hey sweet thang, how about a ride on my mechanical love pony?" asked The Molestinator while swinging his one functional arm in the general direction of Titty McBoobies. His aiming matrix was slightly miscalibratedand it ended up bashing in her left turn signal, shattering it into pieces. "HONK HONK! Shit niggah, sorry about the car."

"Oh Molestinator, take me! Take me now!" Titty cried while throwing her remaining clothing into that little black bucket next to the trash that holds the windshield cleaning fluid. The Molestinator's bowtie began to spin wildly, creating a deadly buzzsaw that sliced through the car's front bumper.

"HONK HONK! You betcha, you walking nipple farm!" screeched The Molestinator while sweeping up Titty McBoobies in his one functional arm and taking off at a blistering two miles an hour. Soon his main engine burned out, shooting sparks all over Titty and giving her third degree electrical burns. "HONK HONK! Sorry, lady. I need to get that checked out." A large chunk of The Molestinator's undercarriage suddenly fell out and exploded. "HONK HONK! And that too."

"I don't care about those parts, you sexy little stud. There's only one part I care about on you..." Titty seductively whispered while reaching towards the area that would most closely correspond to his groinal region. Suddenly one of The Molestinator's eyeballs popped out and sprayed her with boiling hot motor oil.

"HONK HONK! Jesus lady, I'm sorry. That's just a little problem I've had since some seven-year old kid took me to his show and tell and all the other kids used me as a urinal for the following six weeks. I think my alternator is broken or something." He then paused introspectively. "HONK HONK! Actually, that's a lie. I don't even know if I have an alternator, and if I did, what it would possibly do."

"Oh Molestinator! Our love is too deep to worry about such trivial things! Quick, make love to me like you've never made love before!" The Molestinator immediately snapped into action and prepared to penetrate her private area. Suddenly a light wind blew by, tipping him over and knocking a good portion of his skull off.

"HONK HONK! Good God, I'm sorry lady. I just don't think today's my day or something. Listen; I got to get back to the gas station anyway. What say you swing by in a couple of years or so, after I've had enough time to get fixed? Then I swear I'll make sweet love to you all night long." A stray cat approached The Molestinator and began to claw out his remaining eye. "HONK HONK! Well, today's pretty much sucked."

Return of The Yablonski!

Cliff Yablonski is back and better than ever, sporting five new hate-filled pages of morons and flaming simps that he just can't stand! Here's an email I got from the man himself, confirming his arrival!

ive updated my webpage. tell your moronic readers. also tell them to stop e-mailing me or Im gonna just go nuts and shoot up a Costco.