The Passion of CLEATUS

NOT YOUR MOMMA'S COOKING. PANCAKE WITH FACE OF CLEATUS FETCHES RECORD AMOUNT 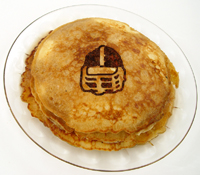 The cook, Jillian T., said she had no idea that her breakfast would be divine. When asked how she reacted upon seeing CLEATUS she stated, "I flipped the pancake and took one look at the image before I felt a great woot growing deep inside of me. I let it out." The local priest stated, "CLEATUS works in mysterious ways."

The Guinness Book of World Records has already stated that the 2008 edition will feature the pancake along with a record length back hair. More...