The Farcical Fables of Groggery Gibbonman

"For a time, Gibbonman's works were banned in libraries world-wide, from the Aeriocities of North Africa to the Czar's Gyrocoptidome. Deemed seditious, his daring appropriation of what scholars dubbed 'the breakfast vernacular' (particularly his use of 'chair,' 'table' and other vulgar names for kitchen furnishings) nonetheless had a permanent impact on the King's English." -Ralston Fleeknock, The Forgotten Manners of Furniture. 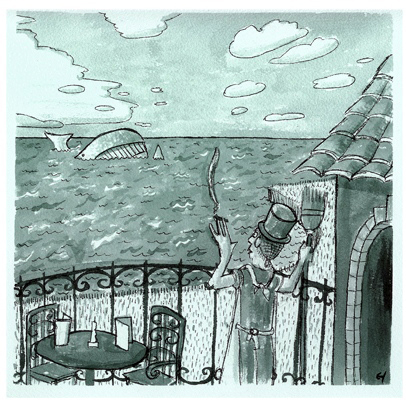 Long away in a coastal land, where the waves tackled the cliffs, there was a famous restaurant. Its menu was as starred as the dark ocean skies at dinner time, and its staff true and earnest, and so it was of course successful (for this was a bygone era, you see).

The restaurant was well renowned, as was its restaurateur, who greeted each customer with a smile and a bow and was tipped most generously for doing so. One day, however, a visitor arrived that the Restaurateur had not expected- an enormous gray whale. The great leviathan let spray a mighty geyser as he rose from the waters.

"PARTY OF ONE!" the whale announced, and smiled a baleen smile.

But the restaurateur shook his head, and he called back "Great gray whale upon the blue! This restaurant's too small for you! A whale inside- that wouldn't do!"

"HOW DARE YOU!?" rumbled the whale. "Good riddance!" thought the Restaurateur as he watched the great beast swim away angrily. But throughout the night he glanced back to the ocean with a wary eye. He had managed enough restaurants to know: This would not be the end of it.

Sure enough, the whale returned the next day, and with him he brought a dinner party- 10 great gray whales, each nobler than the last, until the noblest whale's largesse was quite staggering to behold.

"NOW..." bellowed the whale. "NOW WILL YOU SEAT ME, MAN OF THE SHORE!? I BRING MY OWN APPETITE AND SEVERAL WHALES' MORE!"

"That doesn't help!" cried the Restaurateur, who was understandably frightened of the ten tremendous whales staring him down from the cliffs. "If anything, bringing more whales exacerbates the problem!"

"THEN YOU LEAVE US NO CHOICE!" the whale blared, and with a flip of his tail he summoned his friends to leap upon the shore. The Restaurateur's cries were drowned and crushed (as was he). Whale after whale crashed into the restaurant, which was demolished beyond recognition by the first whale and spread around messily by the rest.

"HOW IS YOUR KRILL TODAY!?" the whales demanded as they flopped on the rubble.

The moral of the story is: Always make reservations. 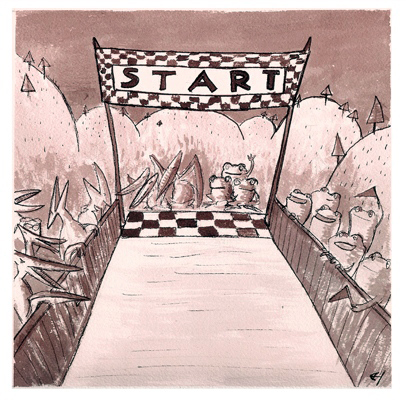 Well before long, much more than ago, when the animals engaged in sport more openly, the frogs decided to challenge the pterodactyls to a cross-country race.

"Absurd!" scoffed the pterodactyls. "Certainly we are faster than frogs by any measure!"

But laugh as they might at the proposed contest, the pterodactyls were honorable sportsmen, and they believed themselves bound to oblige a fair challenge. When the day of the race came, the fastest pterodactyls and most athletic frogs gathered at the starting line, each side boastfully sure of their victory. The flag was raised, and off they went!

Bounding and bouncing over hill and valley, road and river, on they went, the frog athletes hopping with all their might. Yet they were clearly no match for the pterodactyls, who flew in great lazy circles above their competition.

"What's wrong with you frogs!?" the frustrated pterodactyls lamented. "This is hardly worth our while! Why not run instead against lizards or hares? What were you thinking?"

"NOW!" yelled the fastest frog, and his teammates scattered. In grand unison, a thousand frogs appeared at the hilltops, ballistae loaded. The air filled with terrible missiles, and the pterodactyls fell in bloody smashed heaps, dead.

And so it was around the world, where frogs had challenged pterodactyls to all manner of games, sports, and track-and-field events they were clearly ill-equipped to win. But no longer.

The moral of the story is: That is what happened to the dinosaurs. 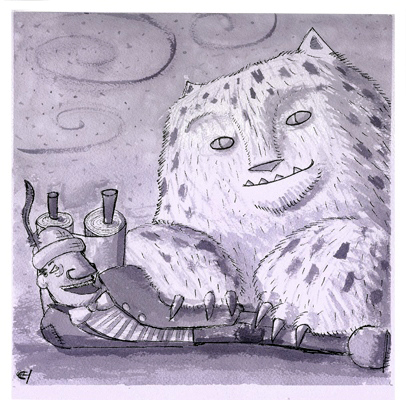 Years and weeks and days ago, a fabulist (the wretched thing) was traveling (as fabulists do) in a dire land, dour and cold. Wintery winds polished the drifts and rattled the reeds.

The Fabulist, being a creature of cities and towns, did not think to listen for the World's Largest Leopard as he wandered through the frozen rows. Though if he had, still he would not have heard it. And had he heard, nonetheless the beast would have been upon him, and so it was by any account that the Fabulist was pinned.

"Great Gods!" cried the Fabulist, beneath untold tonnage of wild white cat. But his mind was quick where his feet were not. "You mustn't kill me, oh enormous leopard!"

"Hmm?" growled the World's Largest Leopard from deep in his chest. "I will kill you when I choose, man of the city. Perhaps that time is now. Perhaps not. What have you to say about it?"

"A story!" the Fabulist creaked with a gulp. "As loved by kings and coopers both! Surely a beast of such magnificent and kingly manner should like amusement in his court!?"

The World's Largest Leopard purred like a cave of snakes, and a horrendous grin found his face. "Very well, city man. Amuse me, and then we shall see what becomes of you."

The Fabulist exhaled with relief and cleared his throat. "Once!" he began with an earnest gulp. "Once there was a skinny deer, who was walking in the snow! Oh how happy he was in his freedom! Oh how glad for his life! So distracted was he with his joy, in fact, that he did not see the most horrible threat- the World's Richest Banker! Perched atop the frosty reeds, he pounced, and pinned the skinny deer, and was about to devour him!"

"Yes..." breathed the World's Largest Leopard, enraptured by the tale. "And then what?"

"And then..." sputtered the Fabulist beneath the crushing weigh of the leopard's paws. "The ... skinny deer, he... uh, he started telling a story. About a ... congressman. Who was walking through the snow when The World's Greenest Grasshopper leapt upon him and ... and pinned him down ...."

"Yes, and then what?" asked the Leopard, engrossed. The Fabulist whimpered.

And so it went for quite some time, until finally the exhausted Fabulist could speak no more, and the World's Largest Leopard (who had been very entertained) rose from his perch. "You are free to go!" he declared, but the man moved not, as he was quite dead.

The moral of the story is: Don't be a fabulist.