This Is Why People Hate You: Finger Drumming

Part One: This Is Why People Hate You: Habits 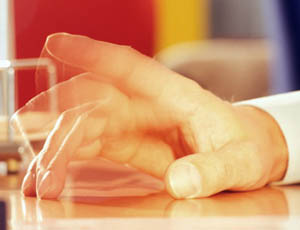 Impress coworkers with your Ringo abilitiesWhat the fuck are you doing? Drumming? No you aren't. You're just slamming your fingers against your desk. Stop it. Stop it forever. No one wants to hear your imaginary drum solos. No one. It's as pathetic as air guitar, but marginally worse since we have to hear your obnoxious garbage instead of just watch. Your shitty habit is both annoying and impossible to ignore. You, Mr. Can't-Accomplish-Shit, have somehow perfected the art of irritation, and you aren't afraid to use it whenever a Skynyrd song comes on your favorite classic rock station.

Why are you even doing it? Are you showing that you've mastered the mysterious art of keeping rhythm? Congratulations, you passed third grade music class. Someone give this man a pair of claves and watch him woo us all with his mastery of 4/4 time. Or maybe you like the song, and your only way to show homage is to half-ass over the original with your untrained attempts in the same way a fourteen year old girl sings whenever she hears a Whitney Houston song. She really loves the Bodyguard soundtrack, you know, and she can't stop herself from warbling out monotone, poorly timed yelps over the tune. She's just like you, and it isn't her fault that she sucks, but does that mean she should quit. Yes. Yes. Yes, and so should you. If you want to honor the song, why don't you try sitting on your hands, or better yet, why don't you just turn it off? It's obvious that you don't know anything, and it would be best to leave art appreciation to others.

But chances are it's neither of those, but instead something much more pathetic. You aren't honoring the drumming, you're improving it. You are playing what the professional musician should have played. Well, that's what you think at least. You're taking it to the next level, and you sound good, no, great. To you, no one is a better drummer, and you're really shredding the drum kit in your mind. Are there fans in there, too? What about friends? Do you have a chin? Like, a real chin, not that recessed wrinkle sloping off your mouth. Well, I hate to bring the bad news, Beaky, but it isn't real. None of it.

No, you sound like shit, and I think that if you were to think about it, you'd figure out why. Let's compare your set to that of a drummer. A drummer has at least two drums, two cymbals, and depending on where he hits them, different pitches. He has a variation of sounds, you on the other hand make only one sound as you bash your stubby little fingers against the steering wheel: thunk. Tap it more, harder, faster, it doesn't matter. It's the same fucking noise. You're like the little drummer boy trapped in a Ford Focus. So, to finish the comparison: your one thunk is the imaginary snare, bass, and high hat, while the real drummer's solo doesn't sound like Thing from the Addam's Family having a seizure. 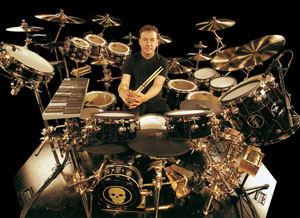 You and your fingersWait a minute. Are you using different fingers and, God forbid, a thumb? Whoa there Neil Peart, go easy on us. You're pushing finger drumming to the next dimension, and I don't think we can handle that. This is some advanced technique stuff right here. Though you barely managed to muster enough coordination to lift and drop one finger, you have decided to move on to higher numbers. Now you have five ambitious little digits making five times more noise. As if the "music" you were making before didn't sound disjointed enough, you have somehow managed to raise the bar on your own awfulness. The world will never be the same, and I am seeing it with my own eyes. I always wondered if I would be alive to see something revolutionary. I was hoping for a cure for AIDS, but you know what? This is fine. This is the miracle I've been waiting for, and you're an angel-- an angel bashing me over the head with the crowbar.

Well, if you used a crowbar, it would at least mean you weren't using those buttery hands. Whether or not that is a good thing, I'm not so sure. The only thing worse than a finger drummer is a finger drummer with two things in his hands. I wish I didn't have to be so vague, but seriously, they have no limits. If they can bash out a primitive beat on the table, they will. Pencils, loafs of bread, and everything else are simple tools of annoyance to these demons. If you're thinking that I'm wrong, that finger drumming isn't annoying, that it isn't annoying when you do it, then I want to tell you firstly that you are wrong, secondly try listening to a kid drum on Rock Band or Guitar Hero for an hour. Just soak in the clack-clack-cl-cl-cl-clack-clack and understand that you force that on everyone you come in contact with. Still unfazed? Well, lucky you. Youtube, the collector of wasted time, is also the home of thousands of videos of 311 fans pounding their fingers against shit. So, why don't you just watch some. Actually, that last one was pretty cool.