It's happened to you before. You and your beefy bros have a big night planned: a Seth Rogen chortler at the show, some Heineken pitchers and wings at b-dubs, and then finishing the night at Lap Kat's tossing wadded singles at an episiotomy scar. Sounds great, but your plan runs into trouble when that sniggering potato head starts burning trees on screen. The sight of Rogen's lusty gusts triggers in you an irresistible nicotine craving during the movie. 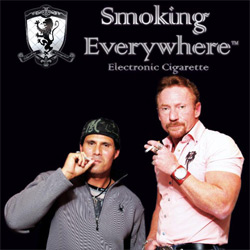 You can't handle it! You light up in the theater. You've barely exhaled the first drag when some pasty peckerwood with a flashlight and a red tuxedo is telling you to get lost for lighting up. Would Don Draper take that shit? You shove the nerd and he falls down some steps real dramatically like he's trying to get the ref to throw a flag. The next thing you know you're getting tased out in the parking lot by some black cop who works for the sheriff's department. It isn't even in his jurisdiction so the cop is totally violating your civil rights.

Your awesome Saturday is turned into an awful arraignment on Monday all over one lousy cigarette.

It doesn't have to be this way!

Chinese nicotine engineers have developed the answer to cigarette cravings in our unconstitutionally regulated post-cigalyptic dysmokia. It is called the Electronic Cigarette, and it isn't actually smoking, it's electronic smoking. A battery-operated micro-heater vaporizes a nicotine solution to produce an odorless water vapor that the user can inhale.

Here's how it works:

It looks like it might have been the result of an open bidding process at the Pentagon, but we all know those don't exist anymore. The e-cigarette is true Chinese ingenuity. Bro, who can you trust more to provide you with unregulated chemical inhalants? The Chinese, after all, have years of experience inhaling electronics.