Greetings shareholders! Welcome to the 2005 Hettsman-Guff-Runwood Summer Prescription Drug Expo here in beautiful San Diego, California! We're so glad you could find time in your busy schedule to visit us today and have a part in our majestic unveiling of this year's newest (and undoubtedly hottest selling!) Prescription drugs researched and manufactured by this decade's most successful stock, Hettsman-Guff-Runwood Pharmaceuticals! We'd like to thank you from the bottom of our hearts for attending our drug expo and simply cannot wait to show you, the shareholder, the many new and creative products we're manufacturing to protect your financial investment.

We have a motto here at Hettsman-Guff-Runwood Pharmaceuticals, and it says, "our motto at Hettsman-Guff-Runwood Pharmaceuticals is that the customer always comes first." This is particularly true in regards to Zexotril, the sex-stimulant Prescription we released last quarter! Ha ha, that's just a little lighthearted Prescription drug humor for you, thanks for playing along. Before we get to this year's sexy new designer drug lineup, we'd like to announce the following incredible accomplishments our team of researchers and market analysts have produced since our last shareholder meeting: 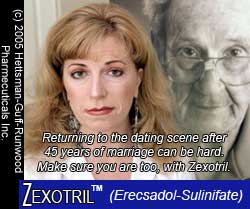 Our scientists have released a new and improved version of our tremendously successful anti-psychotic medication, Calmerex. Apparently some extensive studies by the FDA demonstrated repeated doses of Calmerex caused subjects to grow even more psychotic than they previously were, requiring them to take a large dose of our anti-anti-psychotic medication, Tranquilotta. Unfortunately, the combination of administering Calmerex followed by Tranquilotta sends 36% of subjects into a deep, coma-like state which can only be negated by 100 milligrams of Alertia, which, as most of you are well aware of thanks to the report on "60 Minutes," makes you explode 10-15 minutes after consuming it.

The new formula of Calmerex addresses this issue by making patients so psychotic that their brain effectively shuts down, thereby rendering them completely anti-psychotic. Patients in a coma as a result of the Calmerex and Tranquilotta combination should be given 150 mgs of Beratine, which (among other things) makes the patient believe they are a large Asiatic Black Bear.

The gloriously popular sexual stimulant Zexotril will now be marketed and distributed to many warring African tribes, in a humanitarian attempt to end the violence. Our scientists have determined it's highly impossible to engage in acts of genocide while attempting to hump every object within a 20-foot radius, so hopefully this will help bring stability and peace to their country. We here at Hettsman-Guff-Runwood Pharmaceuticals are very concerned with the well being of the world around us, particularly in areas with low market penetration and federal regulations.

To preemptively counteract any disputes which may possibly arrive once warlords discover their wife has slept with seven different villages (at once), armed helicopter drop ships will unload crates of Psellium to calm their nerves and prevent any possible violence. Due to the highly addictive nature of both drugs, a Hettsman-Guff-Runwood Pharmaceuticals representative will be airlifted into each village at the beginning of the month, offering to trade their precious diamonds for Prescription refills. 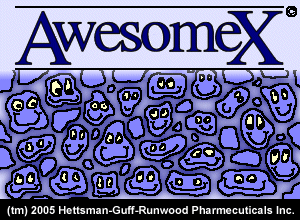 Awesomex, our anti-depressant for children under the age of 18, will begin shipping in a variety of shapes and colors appealing to this generation of youngsters. Look for commercial spots featuring celebrities such as P. Diddy and 50 Cent announcing the new designer medication, available in "Big Ballin' Blue" and "Big Poppa' Platinum." Additionally, our marketing department is finalizing a deal with digital entertainment distributor Jamster which will allow teenagers the ability to refill prescriptions of Awesomex while purchasing Green Day ringtones.

The US Government has placed our largest order to date, a contract worth over $674 million, for nearly 500 million units of our attention-deficit disorder treatment Prescription, Alertia. As a humorous aside, our research and marketing department nearly decided to pull the product from the shelves after the FDA revealed that, in their clinical trials, massive dosages of Alertia resulted in patients entering a blank, trance-like state where they become completely susceptible to outside suggestions and influence. Looks like the government is interested in leading a truly effective campaign to treat ADD once and for all!

The revenue from Alzheimer's medication is expected to reach $2.4 billion next year! That's nearly half the amount of money we're currently earning from sales of Joytrex, our patented anti-depressant which makes you so happy that your brain absolutely refuses to stop making you smile, even after a series of lengthy, complicated neurosurgeries! Although our scientists attempted to enter this lucrative field last year with the release of Eternalal, sales were sluggish due to its unfortunate side effects of replacing the brain's damaged nerve cells with a synthetic, man-made chemical protein which closely resembles the chemical makeup of Laffy Taffy. Renewatine will pick up where Eternalal left off, pushing Hettsman-Guff-Runwood Pharmaceuticals into the forefront of Alzheimer's Prescription drug therapy!

This revolutionary new medication works by shutting down the suspected areas of the brain which may possibly develop damaged nerve cells. In this process, a series of euphoria-inducing endorphins are released, essentially "distracting" the brain from realizing the gradual shutdown occurring. The patient, their brain preserved in a state of stasis by the drug, remains in this blissfully ignorant state until the drug dissipates. During this time, Hettsman-Guff-Runwood Pharmaceutical representatives visit the patient's house and sign them up for Verizon unlimited Internet service, helpfully placing a festive-colored link icon on their computer's desktop right next to the one entitled "SEND AN EMAIL TO LOWTAX COMPLAINING ABOUT SA'S TREATMENT OF THAT DEAD VEGETABLE TERRI SHIAVO BROAD DESPITE THE FACT THAT HE'S NEVER EVEN MENTIONED HER ANYWHERE EVER." 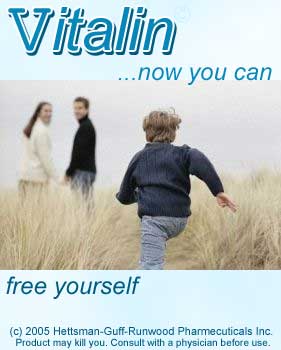 As one of the premiere anti-cancer treatments, 50 mg of Vitalin each and every day has been shown to conclusively lower the growth of cancerous tumors. Vitalin users may experience a side effect of severe headaches, so please consult your physician before use. It works by injecting a series of complex proteins which trigger the body's immune system, thereby producing an increased amount of white blood cells (or lymphocytes). Some patients may experience a side effect of vomiting and dizziness, followed by brief lapses of memory, so please consult your doctor before use. T-cell and B-cell efficiency is essentially doubled by the inclusion of such proteins. There have been reports of certain users experiencing a side effect of bleeding from the nose, eyes, ears, and fingertips, so please wear gloves and a ski mask before use.

Increased dosages of Vitalin additionally reduce the amount of estrogen and testosterone produced, slowing the growth of any cancerous tissue unaffected by previous treatment. Frequent consumption of Vitalin may led to sleeplessness, acute paranoia, obtuse paranoia, 90-degree paranoia, uncontrollable time travel, and an inability to differentiate between any actors in the Baldwin family, so consult your pharmacist before snorting lines of it from the back of a Wee Wisdom magazine. Clinical trials have demonstrated repeated use of Vitalin leads to a 50-80% reduction in cancer, as well as an improved rate of remission. Many patients have reported side effects of osteoporosis, severe weight gain followed by severe weight loss followed by severe weightlessness, the loss of muscle mass, and the gain of additional appendages which often flail and thrash about, so please discuss this medication with the local undertaker before ingesting.

In today's age of terrorism, teenage pregnancy, and moral uncertainty, it's no surprise that arson is the number one cause of property damage. Humans have been struggling for thousands of years to protect ourselves from the unrelenting, ravenous destructive power of fire, but so far there has been absolutely no solution to mother nature's deadly quagmire. We here at Hettsman-Guff-Runwood Pharmaceuticals may not be able to end fire's reign of terror, but we can make things easier for those amongst us suffering in its deadly grasp. Inhalex, when taken for 30 days prior to an incident of arson, greatly decreases the anxiety and fear associated with being trapped in a burning building. No longer will you have to experience unnecessary nervousness and extreme discomfort when your home becomes the target of arson; Inhalex keeps you cool and calm the entire time! 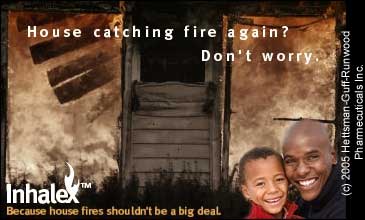 As an added bonus, Inhalex has been proven to reduce stress and mental anguish in the following explicit situations:

Don't be a slave to the negative, uncontrollable emotion of arson-related stress! Pop an Inhalex and fight fire with fire! Inhalex must be taken every day for 30 days before a noticeable effect occurs. Some users of Inhalex may experience a heightened nervousness associated with floods and heavy rainfall. Inhalex is not a general, all-purpose anti-anxiety medication which will cause you to stop worrying about every single negative thing in your life, effectively freeing you from all undesirable emotions and completely modifying the innate behavior of your brain. That effect can only be achieved by taking Psellium, which no longer causes the production of sentient, pro-communist bowel movements.

That's all from the expo floor today, valued shareholders! Thanks again for sticking with us, Hettsman-Guff-Runwood Pharmaceuticals! We guarantee another long and profitable year thanks to our intelligent, hardworking employees dedicated to producing our patented line of life-enhancing medications for every possible situation. Remember: life isn't life without Hettsman-Guff-Runwood Pharmaceuticals!