Thor 3: The World That Uses Incandescent Bulbs, But They're, Like, Low Wattage, It's Not Exactly Dark But Everything's Sort Of Orange And Difficult To Focus On - "Found footage" thriller in which an enormous Norse fairy enjoys himself at Pizza Hut. (120 minutes)

Avengers 2: And A Half Hours Long And We Sold You A Cola Big Enough To Swim In - It's a race against time to see if any fucking thing at all worth watching happens before you develop renal failure. The popularity of the Sad Skiwear Robot character leads the International Olympic Committee to replace the Olympics with a second Winter Olympics. (135 minutes)

The Wolverine 2 - Wolverine discovers that the key to stopping the Yakuza guys from constantly shooting him and hitting him with baseball bats lies not in their boss's daughter's pussy, but in the All Valley Karate Championship. (152 minutes)

Iron Man 4 - The gay robot version of Batman who fell in love with his computer must face a new kind of foe, as remote controlling his toys that shoot missiles is now bad instead of good like it was in Iron Man 3, because people don't like drones now. Marvel were heavily criticised for getting so heavily involved in domestic politics, leading to a brief constitutional ban on their films, which was repealed by President Spider-Man. (162 minutes)

Av3ngers: The Avengers stop Dr. Doom from practicing medicine without a license by repeatedly destroying large swathes of the New York. Dr. Doom's dying monologue consists of an ad-libbed speech by actor Jaden Smith about how the real sound an American bald eagle makes is "fairly gay" and "not cool at all." The good guys do superhero poses atop the rubble from the terrorism that they did, and an eagle majestically screeches to signify that the medical profession has been suitably avenged. Notable for fierce on line debates about the recasting of Hulk, a character composed entirely of CGI. (181 minutes)

Avengers Disassemble - Captain America reveals he holds dual citizenship, leading The Avengers to destroy every other nation on Earth with their enormous floating minivan. (199 minutes) 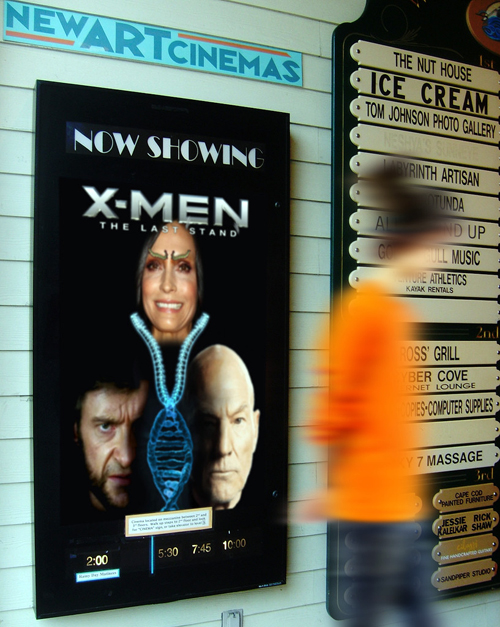 X-Men 4: The Last Stand - Wolverine and Cyclops mope for several hours as Phoenix marries Sourpuss, a powerful mutant who can give a ballpark estimate of vaginal mucosa pH through simply tasting it for 45-60 minutes. The subtitle was necessitated because an enraged Hugh Jackman pushed Patrick Stewart down the stairs on set, paralysing him. A sub plot was hastily added in which Professor X learns to walk again thanks to homeopathic medicine. Famke Janssen's surgically taut eyebrows look like a pair of caterpillars attempting a desperate escape. (214 minutes)

Iron Man 5 - Iron Man's anxiety disorder manifests itself as an uncontrollable urge to use his space age robot technology to breathlessly talk over videos of himself playing Mega Man 4 on youtube for a living. (233 minutes)