Unfortunately, Gay On The Range only provides the covers, with no description or excerpts. So I just had to guess at what each book was about based on its cover. Due to the nature of the covers, most of these guesses ended up being about gay men. If reading about gay men bothers you, then this sentence might bother you. Let's start things off: 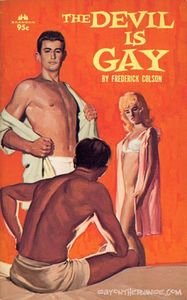 Possible Plot: John is just a simple man, with simple problems, but he and his newly wedded wife are in dire financial straits. So when a muscular devil played by Adrian Brody (Angels in the Outfield, an episode of "Saturday Night Live") comes into his life, he agrees to make a deal in exchange for a lifetime of wealth. But instead of asking for his soul, the devil wants to sleep with him, because the devil is gay. His wife is unsure.

Comments: The title of the book would also work for a Chick tract or an album by a gay death metal band. Song titles would include: "Rip Out the Throats of Little Children (Rainbrow Pride Remix)" and "The Bloodreaper With the Nicely Toned Buttcheeks Descendth". 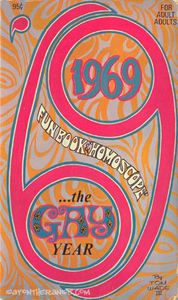 Possible Plot: There is none. This is a serious academic attempt to prove that 1969 was, in fact, the gayest year on record. Other strong possible contenders include 1932, 1977, and whatever year you were born in. Extensive footnotes back up the various factors he cites, including how many men were having sex with other men that year, and how the last two digits of the year are just like that sex thing that sometimes gay men do.

Comments: It's true that very few movies have been filmed in "Homoscope", let alone any books. But if it worked for the Harry Potter movies, I guess it'll work for this.