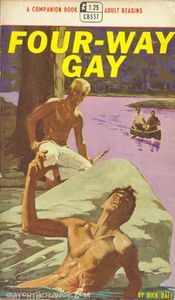 Possible Plot: Jake just killed a man and watched the lifeless body slip under the water of a river. Meanwhile, elsewhere, these four gay guys are getting it on. They are under the covers and having a wild time of it. There's plenty to go around, and they are going around plenty! We're talking heaving, sweaty backs, and there are four of them. This is the best four way gay ever! But then the phone rings and it is the police. Turns out the dead guy was one of the gay guys' son. This is the result of your sinful lifestyle. Now your son is dead. Not so gay anymore, are you?

Comments: I don't know what the heck is wrong with that dying guy's torso, but I would estimate that he's about 10 feet tall just sitting up.

How gay is it: One more gay than We Three Queens. One less gay than Under Five Fags. 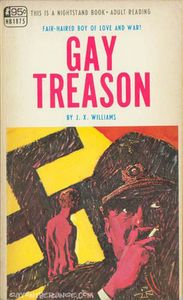 Possible Plot: Jeff is committing treason. He is selling out government secrets to the Nazis. That sure would be easier if he'd wear some clothes, but he's gay, so he can't. The C.I.A. eventually gets suspicious of the naked dude that keeps loitering around the top secret plan storeroom, and they arrest him. He is in love with this Nazi guy and that is why he did it. That is why he did Gay Treason. The Nazi guy wants to love him back, but he cannot because his heart is divided by his loyalties. Jeff is found guilty, guilty of love. And treason.

Comments: Nothing says "here's a great book for a gay guy to get off to" like a huge swastika on the cover. I was being sarcastic there, but maybe gay guys really do like big swastikas in their sexual fantasies. I wouldn't know, because I am definitely not gay. Never have been.

How gay is it: Two gay thumbs up. 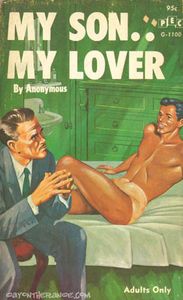