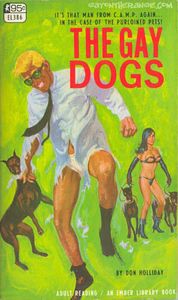 Possible plot: There are killer dogs on the loose, gay dogs, and they hate straight people. Every time they see straight people start to engage in straight people sex, they attack the straight people straight away, ripping their clothes straight off and sending the guy running straight down the street. That'll teach him for not being gay. These dogs may not all be gay, I didn't check them all. Most of them are probably gay though. I think dogs will pretty much just hump anything. Dumb dogs.

Comments: Fortunately, if you're gay dogs get sick, there is a professional waiting to help.

How gay is it: Dogs can't be that gay, I don't think. So probably not that gay. 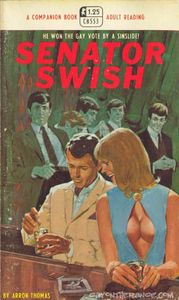 Possible Plot: There is a senator named Tom Swish. He is not gay, definitely not, but his name is so gay! He is embarrassed and spends a lot of time hitting on women in public so he can show off his straight nature. But the boys of the senate don't buy it for one second, and they're always winking at him and undressing him with their eyes. Senator Swish is a lifelong bachelor, but that doesn't mean anything at all. He loves women, and their boobs. Boobs are cool, he and all other straight men agree.

Comments: I could go for the easy joke about how Republican senators are all turning out to be secretly gay, but I won't. Because it's not a joke. Every Republican senator is seriously a closeted gay who solicits sex with other men on a regular basis. This is a fact.

How gay is it: Gayer than Larry "Wide Stance" Craig. Not as gay as Mark "Love To Slip It Off You" Foley.

If you enjoyed this article, why not check out the other installments in the Bargain Book Bin series:

The internet: Where you read about books.