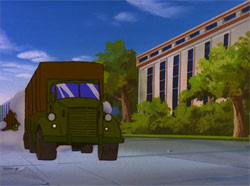 Driving trucks in a major city, there's no way GI Joe could screw this up.GI Joe has been tasked with driving a convoy of trucks through Washington, D.C. to the newly completed National Archives. The trucks contain the most precious documents of our Republic. The Constitution, the Declaration of Independence, and various other treaties and agreements are stacked in the backs of the trucks. Far be it for me to disparage GI Joe, but given this "crack unit" and its long litany of narrow victories against terrorists in bright blue pajamas I have to question the judgment of this assignment. Entrusting GI Joe with most of our nation's written history is like handing a toddler the world's most valuable graham cracker for safe-keeping.

Things turn out as you would expect. Leather-clad provocateur the Baroness and a unit of Tele-Vipers have infiltrated Washington D.C. and they ambush the convoy using surprisingly effective tactics. The Baroness blasts out the tires of the lead truck, causing a pileup. She then seizes control of the final truck in line from Duke and Scarlett and drives away.

Duke observes with confusion that they "weren't carrying anything valuable" in their truck. Way to downplay your colossal failure. I'm sure the people at the Smithsonian will just write off all those 18th century treaties and lithographs of presidents in the back of your truck as the cost of doing business.

"Oh, the Louisiana Purchase? Don't even worry, as long as the Constitution made it eight blocks to the National Archives we're happy. Great job, GI Joe. We knew we could trust you with America's history."

Evening at the Extensive Enterprises tower. Tomax and Xamot greet the Baroness and she hands over the Alaskan purchase agreement signed by William Seward in 1867 that she looted from the back of Duke and Scarlett's truck. The agreement reveals that used car salesman Georgi Potemkin wasn't lying when he told Tomax and Xamot about a loophole in the agreement. The frumpy Potemkin enters, bragging in a thick accent that he has been selling cars for 30 years and now he is going to make his fortune in real estate. 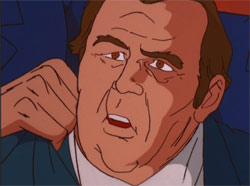 The Governor of Alaska reacts to the news that the state now belongs to a used car dealer.Tomax, Xamot, and Potemkin smash through the door of the office of the Governor of Alaska. The Crimson Twins manhandle the Governor out of his seat and Potemkin kicks back in his new throne. The Governor tries to call for his secretary, but the twins explain they sent her home for the day and that the Governor is going to be headed home forever. Potemkin opens a box containing a garish blue cup and pronounces himself the new owner of Alaska thanks to the stupid-looking cup he is holding. "According to provisions in the Seward Treaty," Potemkin explains, "Whoever owns the seal owns Alaska."

Sounds reasonable to me and it's sure to hold up in court when you're sued by the 700,000 residents of Alaska.

The Governor reacts with understandable disbelief. Apparently the building security reacted with similar disbelief, perhaps suspecting some sort of practical joke or strip-o-gram. That's the only explanation I can come up with as to why they allowed a balding car dealer and two guys in matching blazers to kick down the Governor's door and throw him on his ear. 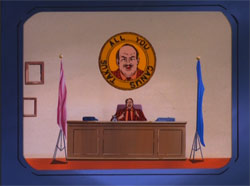 You have 24 hours to leave Alaska or my squadron of elite pilots will eject over your homes.Georgi Potemkin airs a commercial for his new empire from the Governor's office, informing the citizenry of Alaska (now Georgiland) that they must leave the state before he is forced to kick them out. That would be a sight to see, considering Cobra usually has trouble kicking a red wine stain out of a tablecloth.

Scarlett explains in a sepia-toned flashback that when Seward bought Alaska from the Russians in 1867 the sale could not be finalized until the Great Seal of Alaska was transported to the Americans. Even though Seward is shown signing the treaty with the Tsar, the Tsar decided to send the seal on a ship rather than hand it over to Seward. The steam ship Romanov disappeared somewhere in the Arctic while transporting the seal to the United States. From this flashback, Duke comes to the conclusion that Potemkin's seal is a fake and that GI Joe must find the real seal.

Unfortunately for GI Joe, the commie shitbags over in Red October have had the same idea. They think that if they can locate the real seal they will return Alaska and all its riches to the Soviet Union. It's amazing how much power a used car salesman with a stolen treaty and a fake cup can wield to influence world events. Especially retarded world events.