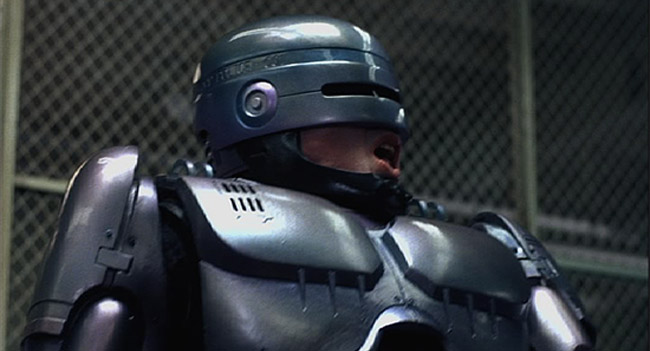 Robocop didn't always use toilets. Before Delta City was built, he regularly released scalding-hot blasts of grease-like sludge all over the precinct. Sometimes he directed his nozzle into a trash can. Sometimes not. He went where duty called him, whether it was interrupting a domestic dispute by punching a man through a refrigerator or shooting a biker gang off their motorcycles outside a drug factory.

Even after toilets were installed in Delta City and Robocop was upgraded with a cyborg butt hole, he did not like to use toilets. He crept into closets and abandoned cars and relieved himself in privacy. He turned the precinct into a shit hell mess. Creeps were slipping and sliding all over Robocop's smelly grease. He just went right there in the lobby and nobody could stop him. He was a hero cop by that point and they lacked the firepower. It was affecting his work. He just went right there in the cars. Nobody wanted to ride with Robocop. His cars smelled bad. It was a bad scene. It was embarrassing for everyone, but Officer Lewis could not get through to Murphy to use the toilet. It took intervention by OCP. 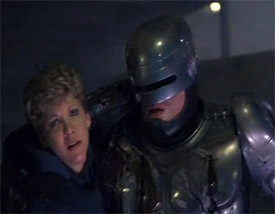 Officer Lewis helped Robocop find a toilet no matter the inconvenience.The techs called up Robocop's memories on their computer and they knew about the whole bad scene Robocop was into. He was given a new directive to use the toilet. Directive 5. The toilet directive. It worked. He began to use toilets. But that was only half the fight, because he would absolutely destroy the toilets. There was so much of that grease. You would think it would flush easily, but no, it just blocked up every pipe it hit like sealing epoxy.

OCP almost replaced Robocop with another Robocop that had a very small ass and only peed. It drank algae and it never pooped. But then it turned homicidal and Robocop had to kill it. This new Robocop was a psycho. More trouble than he was worth. He killed a lot of good cops and why? Everyone has some toilet issues. OCP just had to work around them. That was when the Epsilon Initiative was born. It was sort of like a bathtub made from titanium and Robocop could climb inside it and then it would fill with a solvent that would clean his armor and it would also flush his waste grease. The initial trial was just a few of these Epsilon Units placed throughout Delta City.

Then it was revealed other dead cops were being used to control the Epsilon Units. They lived in a constant dreamlike hell, cybernetically fused to the toilets, torn between their need to flush excrement and their family lives when they were human. The project was discontinued, but not before Murphy realized what he was doing and finally began to gingerly use regular toilets.

So when you read the novelization of Robocop it's interesting to consider all the thought that went into the toilet situation behind the scenes between his death as Murphy and his resurrection as Robocop.