Holding Out for a Hero! 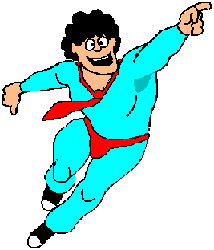 This hero has a luxurious head of hair with which he fights crime and earwigs.

I need a hero. That's right, I'd just like take this opportunity to say that I'm holding out for a hero 'til the end of the night. He's got to be strong and he's got to be fast and he's got to be fresh from the fight. All of these things are very important and even necessary. Perhaps you are wondering why I feel this way? Why my nights are spend in sweat and torment? Well it's not by choice, let me tell you that. Well, not usually. I am just so worried about the horrible state of the world that I can't sleep and when I do eventually fall asleep I wake up soon afterward in a pool of my own vomit and urine from being so scared. It's a vicious cycle! I have tried to fix the problems that I see out there, problems like crime, Martha Stewart, and crime, but I'm just one person. I can't do it all.

In these dark times, it is easy to lose all hope and turn to witchcraft or Scientology as methods to make yourself feel better about things like the dramatic rise in scabies and the rising cost of cheese. Those are only temporary solutions, however, because as a witch you are bound to eventually run out of oil of newt testicle and as a scientologist you are bound to run out of money. So it is no wonder that these days people have given up hope in large numbers and eaten bowls full of Draino or even taken up yoga. The world is not a very happy place and it lacks a positive motivating force to drive it to the circus each Saturday afternoon to see the funny clowns. That is why we each need a hero! A hero could save the day and also do the laundry for us when we were too tired because we were out drinking and gambling again until 5 AM with that one guy who works at the 7-11. At least, I need one. Because I am too lazy and inept to do things for myself.

I have given this matter a lot of serious thought and I decided that it would be best to completely and thoroughly analyze the situation before I just go picking someone I want to be my hero. A hero has to have a certain set of characteristics that are rare and hard to come by. A hero cannot just be found easily and quickly in the dairy section of the grocery store. It is always a long, tough search that is usually fruitless for months if not years. Personally I hold my heroes up to such rigorous standards that it becomes close to impossible to find anyone who matches all of my criteria. But when I do eventually find my hero like I know I will, I will look for at least the following characteristics: 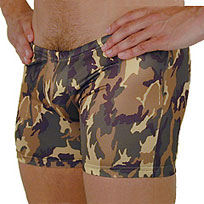 One way my hero can camouflage himself is by wearing very tight, very short shorts made out of vinyl or latex. And nothing else.

The hero should be capable of doing basic hero-like things such as flying, lifting heavy objects, and killing swiftly and efficiently. These skills will come in handy in situations where I need to be lifted out from under a heavy car or building and then flown to another location. While in flight, my hero will kill birds that get in his way in a very humane manner.

Another must is the ability to camouflage well. This is especially important when I and my hero are deep-sea diving as it is all too easy to get spotted by sharks and other scary undersea menaces that might want to make us into a tasty meal. With camouflage, we can hide from them and make them a meal instead! Stupid sharks.

A third and very important skill to have is the ability to shoot various things out of bodily orifices. These things can vary from laser beams to feces, but woe betide anyone who chooses to stand in front of my hero when he starts shooting things from holes. And when he gets angry, those things just start shooting out faster and faster, so watch it!

My hero should be good at playing gin rummy, because dammit I like that game and if I'm going to be spending a lot of time with this dummy he might as well know how to play a simple card game.

I have put together a short list of a few heroes I think might be up for the job of Heroing for me, but this list is by no means even close to complete. Heroes come in all shapens and sizes and even the smallest of us can be a hero if we look deep inside ouselves and find that inner glow. I believe in you, Tiger! Go get 'em, RAWR! 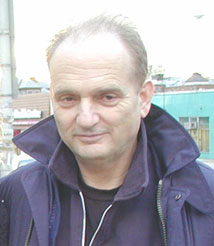 PROBLEMS: After a lifetime of winning at video games and manually pleasing women, Really Bendy Thumbs man is very arrogant and a little hard to put up with for more than 15 minutes at a time. He alsoenjoys pointing out his thumbs to animals by tapping them on the shoulders and pinching his thumb and forefinger together while saying, "Eh? How about that?" In this way, he feels more superior than animals because he has opposable digits, but unfortnately this gives him away to enemies all too easily.

SUPER POWER: His thumbs! They are bendy! 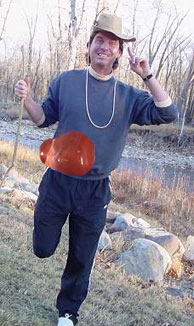 Man Whose Liver is on the Outside Man loves the great outdoors and frequently takes hikes, but he has to be on the lookout for bears.

NAME: Man Whose Liver is on the Outside Man

ABILITIES: Man Whose Liver is on the Outside Man is the best at dispersing large crowds of unwanted people with his pulsating, slimy liver. He sneaks up behind someone, clears his throat loudly and gesticulates with his abdomen. Depending upon the venue, the result of this can be anywhere from laughter to mass hysteria. The most common reaction is vomit which would give me a chance to run away while my enemies are busy puking their guts out at my hero, the freak of nature. He is also good to have at picnics in case someone forgets to bring pate because of the liver's amazing regenerative properties.

SUPER POWER: He metabolizes things at the speed of light! And he's pretty repulsive to look at unless you're into that whole "body-parts-on-the-outside-instead-of-the-inside" thing. 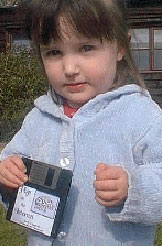 Captain 5-Year Old is a techno whiz and you had better back your hard drives up onto floppies because she is out for vengeance!

ABILITIES: Captain 5-Year Old is a master of duplicitous disguise, deception, and distraction, dammit. She easily impersonates a small child, therefore luring my enemies to her to do some serious cheek-pinching. Once they get close enough to begin exclaiming over how cute she is, she unleashes one of many deadly computer viruses that hack into their systems and cause immediate crashes and errors that make it really hard for them to get to their data! Sometimes she even erases important things on their hard drives and replaces them with Blue's Clues mpegs, but only in extreme circumstances will she go that far. She also has an amazing drooling power that she unveils in especially tough circumstances, causing people to recoil in disgust and search for tissues.

PROBLEMS: Captain 5-Year Old is unfortunately easily distracted by cute, fluffy things. The list of these things includes puppies, kitties, chickens, other birds, and some forms of marmots. As a result of this it is very dangerous to take her into public places because she will lose tract of her mission fairly easily and wander off to "pet the pretty thing." Captain 5-Year Old is also a prime target for pedophiles who attempt to lure her into their cars with promises of candy of threats that her mommy is sick. She falls for this ruse every time, so it's important to keep an eye on her whenever possible. 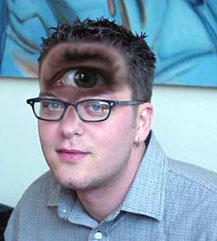 The Dreaded Quintaclops seems benevolent enough in an emo-rocker sort of way, but they don't call him "Dreaded" for nothing!

ABILITIES: The Dreaded Quintaclops was cursed not only with the need for glasses but also with an extra eye on his forehead that is very large and also not the same color as his other eyes! With this mystical fifth eye, the Dreaded Quintaclops can see around corners more easily than people with less than five eyes. He also wears a bandanna around his fifth eye or one of those dumb foam baseball hats that look like they were bought at a thrift store to easily blend in at emo rock shows. When the headlining band appears, he unveils himself and causes multiple faintings and heart attacks in the highly-caffeinated counter-culture crowd. In this way he slowly but surely removes one moron at a time until they are all dead or at least just creeped out because he has so many goddammed eyes.

PROBLEMS: Because he has so many eyes, the Quintaclops has a lot of allergy problems. In the springtime when the pollen count is high he can't leave the house much less do a good job being my hero, so that tends to be a slight problem because I would need seasonal hero assistance. He is also prone to taunting by neighborhood bullies because of his higher-than-usual number of eyes. Names like "Ol' Five-Eyes" and "Starey" tend to make him cry, and when he gets upset he refuses to move until the bullies apologise. Sometimes this never happens and he stays in the same place for months until it is time to chence his eyeglass prescription.

SUPER POWER: He has five eyes. What more is there to say?

These are just four possible heroes that I could hire to help me save the world and also help me sleep better at night. None of them are perfect and I might just be better off getting a pet of some sort like a fish or perhaps one of those lizards that change colors, but the concept of having my own hero to defend me and do my bidding is a very interesting one. In the mean time, I will continue my search for the perfect personal hero, but so far I have not had any luck. Maybe I am not looking in the right places.