Weapons... of the FUTURE!

I Should Be In Charge of a War 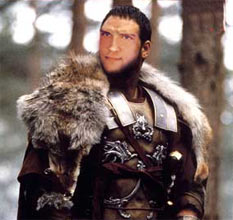 You're not the boss of me!I am an armchair general. For those of you who missed my "coming-out-of-the-closet" post a few months back, I love turn-based strategy games and I watch the History channel all the time. Now I would like to take the time to admit that my boring and shameful obsession runs even deeper than previously stated. I own roughly thirty books about war, I voraciously devour the most dry and purely informational book Panzer tactics or infantry tactics like it was the latest attorney-themed pot boiler from John Grisham. I have knowledge of personal, tactical and strategic weaponry and equipment to rival the most bookish quartermaster in the United States armed forces. I am fully versed in combined arms warfare, electronic warfare and any other annoying "something warfare" situation that might arise.

In short, I want to be a real general. Yeah, I realize that isn't how it works, but I have spent a lot of time adapting these strategies to the coming revolutions in battlefield technology and sprinkling them with my own ideas about implementing some personal innovations. I think I have some pretty damn good ideas.

Paratroopers are one of the most elite infantry units in any armed forces, but I think it would be wise to take the best of these already great soldiers and train them to form new units of Astronaut Paratroopers. Just as the name implies, these brave warriors would be launched into space. Once their spacecraft was in orbit over the target they would await the signal to drop through the atmosphere and onto an unsuspecting enemy. They would ride umbrella-like shields of heat-reflective tiles through the atmosphere; their Indian-like war-cries would ring out over the tight band communication system. Once they were inside the atmosphere they would deploy parachutes to arrest their fall, eventually coming down well behind enemy lines for a dangerous commando operation. Naturally they would be dressed as some type of alien, as nothing is more demoralizing than thinking you're getting attacked by a force of crazed chainsaw wielding aliens. Oh yeah, that was the other thing, they would be armed with chainsaws and also possibly some top secret heat ray blaster.

A sample of the third frame of one of my edited and deadly Garfield comics.This new technique is a personal innovation. Bombs loaded with very specific and entertaining propaganda - in this case Garfield comic booklets with the punch lines all changed to something actually funny - would be dropped over enemy population centers. When the enemy citizenry picked up the comics they would inevitably leaf through them, laughing at the antics of that crazy fat cat who loves lasagna. They would be laughing so hard they would at first think that they were dying of laughter, but in fact they would be experiencing uncontrollable seizures courtesy of the systemic neurotoxin laced in each and every hilarious page.

Supplying a fighting unit of divisional or greater strength with hot meals is one of the most difficult logistical problems facing any operational commander. Recent innovations such as MREs (Meals Ready to Eat) have reduced this problem to more manageable levels, but I suggest taking things a step further. I have developed working schematics for a 280mm mortar with a range of roughly 9 kilometers capable of launching shells filled with over 100 hot meals to troops on the front line. The propellant cooks the meals as they are launched skyward and by the time the steaming shell lands near the front, the troops can help themselves to a piping-hot meal just like mom would make if she cooked with HCX binary shell propellant. As an added bonus, long-barreled low-velocity spotter mortars would be capable of delivering single serving specialty meals to the front line while serving as a range-finder for the massed meal artillery.

Who hires butlers? The wealthy, the powerful, and very slightly dysfunctional sitcom families, that's who. I have designed the ultimate butler robot, capable of performing all of the tasks of a human butler without ever growing tired or complaining. These butler robots would infiltrate an opposing nation, taking up residence in the houses and palaces of the enemy's ruling class. Then, when the enemy least expects it, the butler robot would explode, potentially killing them and at the very least badly damaging their expensive tea service. Currently the butler robot is in the prototype and testing stages. We are trying to work out a glitch that causes the robot to constantly cry and shriek "No, please God, why?!" 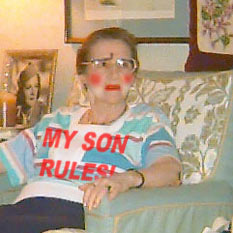 Here is a mockup of Mother Assassin deployed in the field.Using time travel to eliminate a threat is fairly routine military strategy these days, which means that the enemy will always be on the guard for a killer cyborg sent into the past to eliminate his mother before he was even born. That's where my assassin comes in. A trained master of disguise, this assassin will travel back in time and kill the opposing ruler's mother AFTER he has already been born. The assassin will then impersonate the ruler's mother and will seek to embarrass the ruler at every opportunity. The assassin will do this until the timeline has been modified to the point where the ruler has no self esteem and his people perceive him as a worthless joke.

Finally, this new technology comes courtesy of my evil collaborator in all things insane and militaristic; Al Derby. This innovative transport system is designed specifically for a Chinese invasion scenario in which US and allied naval units would need a swift and accurate means of delivery to the front line. The system would be constructed on the mountaintops of neighbouring Nepal overlooking the south-western Chinese border. It consists of a series of giant torsion-powered catapults each of which is large and powerful enough to propel an entire submarine over the border and into inland Chinese lakes and rivers. The system's only disadvantage is that to re-string and wind back each catapult would require the efforts of 8-10 squadrons of heavy tractors or at least two full herds of dinosaurs.

I request, no I demand, that the United States armed forces instate me as supreme commander at once! My plans are sound, my tactics unquestionable, and my will to fight has been tested several times by people in Junior High School, and I only backed down once! It was this retarded kid who constantly swung his head back and forth and I was afraid I wouldn't be able to land a solid hook on that boat-motor noggin of his. Plus I heard retarded people are like two or seven times stronger than a normal person.