Hold On, My Computer's Telling Me I Have Beef With Some Dude 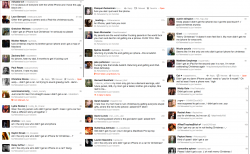 Christmas retweets!In the very early hours on Christmas morning I was sleepless at my mom's house, fooling around on Twitter and retweeting a bunch of stuff from ungrateful people who didn't get the iPads, iPhones, and cars they felt they deserved. Everyone else in the house had gone to bed hours ago, so this was pretty much the only way for me to pass the time that didn't include watching that creepy footage of people sleeping on the baby channel. A load of other sleepless Twitter folks got in on the fun and we had ourselves a pretty decent time, for what it was worth. Within hours, along came Jonathan Mann, who immortalized the ungrateful teens in song and did a really good job of it, too. In fact, I'd recommend you go watch his video and then close this article entirely. He did 300x more work showing those tweets off, and did so with incalculably more talent.

Several popular tech blogs picked up on the retweets and Jonathan's song. Many of the retweets were also featured on some more popular YouTube channels, such as those belonging to "sxephil" (also known as Philip DeFranco) and "TheAmazingAtheist", better known as TJ Kincaid, pictured below. TJ made a video showcasing some screenshots of the retweets, accompanied by his classic facial contortions, trademark complaining about the excesses of people who are not him, and other assorted, assuredly-hilarious bellyaches about how people should act that only a bearded, twenty-something antifeminist libertarian could provide. It was a fun time! 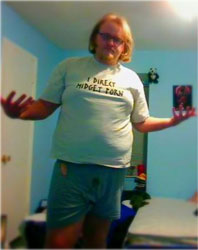 The Outstanding AtheistDuring all this, some guys took it upon themselves to post comments on TJ's video, saying in rather impolite terms that he'd ripped my bit off or otherwise owed me some sort of recognition, since he didn't say my name out loud or something. I found that pretty absurd. To be fair to TJ, the screenshots he showed in his video quite clearly say "retweeted by [yours truly]", and furthermore, I don't want nor feel like I deserve credit for much of anything. I'm glad folks got a kick out of it, I'm glad it actually spurred some discussions on consumerism and hype and things, and I truly appreciate people I don't even know standing up for me, but this credit issue isn't really a thing that needed folks spending their time on, much less over holiday breaks. He's just a dude who yells at his webcam, you guys. Chill out.

For mystery moon reasons though, the crack squad at some blog called The Daily Dot decided to delve into the seriously-without-a-drop-of-sarcasm-story-worthy comment section of YouTube and write a piece suggesting that I might have some kind of blood feud with TJ. The whole piece is ridiculous, and I refuse to link to it on the off chance they might make a penny more off of ad revenue. It goes on to suggest there's some point of contention as to who "owns" the retweets, and gently implies that perhaps a group of supporters were trying to accomplish something or other by being hateful via the comments system of YouTube. It actually gives me a headache that this idea exists, much less in a published form somewhere.

Sure enough, I did mention on Twitter before The Daily Dot came along that I felt TJ was "awful" and "terrible in every way", and this might be part of where The Daily Dot got their story. I call my own boss, Rich "Lowtax" Kyanka, things like "a bigtime piece of shit" and "a dildo toucher", usually right to him. I call David Thorpe a "big ass haver" and a "dried turd-saving, lactating creep", usually behind his back. I refer to Joshua "Livestock" Boruff as "The Pubelord" to practically everyone I meet. Calling someone things isn't anything too special, and definitely not worth writing a whole story about.

With that said, and on a bit of a tangent, even in some bizarre parallel universe where I felt like fighting over something like that, I could not possibly have beef for very long. The lengths TJ "TheAmazingAtheist" Kincaid will go through to disprove the notion of a kind and loving God are quite remarkable. They're also sometimes not work safe and disgusting, but they go a very long way toward confirming that we live in a depressingly cold and uncaring universe.

Sure, the "The Amazing Atheist" character probably nets TJ a decent amount of money as a YouTube partner, and he probably pocketed a good bit riding that wave. I respect TJ's efforts as an entertainer. He has a following, and more importantly, he is a man who inserts food items into himself, owns up to it, and does so in a popular YouTube video, causing him to ultimately make money off of that action. In this way, TJ Kincaid quite literally has sex with food for a living. One could say that he's bringing home the bacon in order to perform sex acts on it, or is having his cake and eating it out, too. Perhaps you'd say he goes to McDonalds with the intent of literally lovin' it, or that his one night stands are actually fruit stands, or that he's laughing all the way to the food bank. You see, I could never choose to have beef with The Amazing Atheist because it might wind up with a modest hole in it.

The barrel and its easily-shot fish aside, my point here is pretty much the same thing I was gently hinting at on Christmas Day, when we were retweeting the ungrateful folks who got the wrong color iPads: The Internet is making us stupid. When it's not outright selling us on something, it's doing something otherwise trashy to get ad impressions, us included. Close your browser and all its tabs, turn off your gadgets, and go love the people who love you back. You've probably got a niece, nephew, or sibling somewhere who would love to play catch with you right now. (Unless they got that white iPhone for Christmas.)