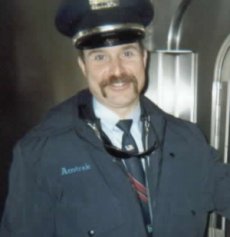 Before we get into the meat of this matter, I want to apologize for failing to provide you with the usual sassy Saturday fare last week that you have all come to love and depend upon. Unfortunately I was detained by "The Great Power Outage of '03". The man-made disaster struck as I was at work descending in an elevator. I don't think I need to tell you that I was in quite a pickle, and was trapped in that little metal box for the next 24 hours, although I had company in the elevator; three visiting Japanese businessmen shared my fate to wait out the long hours in the darkness. Thanks to them, I survived by cannibalizing their tender Japanese flesh and piping hot blood to nourish me during my agonizing imprisonment, and I'm currently negotiating a movie deal with CBS about my heroic adventure called "Alive 2: Elevator Madness". I promise I'll never leave you again my faithful readers, unless of course I have to organize my sock drawer, fall down the stairs and break my legs again, or leave my torrid past and hit the rails, becoming the best train conductor in the entire world.

That's right, I've decided to become a train conductor. I'm dead serious you guys. Drastic steps towards this new occupation have already been taken, such as enrolling in Fancy Boy Training Academy, so there is no turning back now. No, I'm not presently taking any heavy drugs, or suffering from a quarter life crisis. This is something that I've been brooding about for years now. I just turned 25 a few weeks ago, and reality came down on me like a ton of bricks. I've been working non-stop since I was a teenager, and what do I have to show for it? A few Hall and Oats records and knees that pop like champagne corks, that's what. I have been complacent in my position of being a lackey, a servant if you will, to the corporate overlords who throw me some scraps now and then for being a good boy. I am just a pawn in this mad chess game of society, and despite all my rage, I am still just a rat in a container with metal bars. But no more! That all ends.......................now. 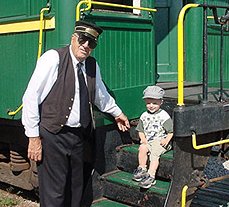 This is me as a child with my grandpa shortly before his death. He was just about to spank me for disrespecting his train with a booger.

I have never told anybody this, but my grandfather, Harry "Whiskeynips" Paskiewicz, was a famous train conductor back in the 50's. I don't like to mention it at gatherings or social functions because I don't want to seem like a braggart, but my grandfather was not only the most skilled train conductor in the golden age of the rail, but he also won the congressional medal of honor for singlehandedly defeating the Native Indian savages and Tusken Raiders that would continually harrass the Chicago/St. Louis line. He was fast friends with the likes of prominent figures like Teddy Roosevelt and Al Capone, and it wasn't uncommon to see him hanging out with the popular movie starlets of the day. Unfortunately, he was killed at the ripe old age of 68 when he tried to be the first man to drive a train from New York to Paris. Because no rail exists between these two points, he was lost in the sea along with his cargo of Alf shirts. Understandably, this is a lot to live up to, and has been haunting me all my life. I've always felt the conductor's blood in me chugging me in this direction, and despite all my efforts to fight this urge with drugs and video games, I cannot deny that it is my fate to ride the rails in the glory of my forefathers.

Alas, national interest in trains are waning. Shipping is now primarily done with interstate trucking, and passenger trains are all but null and void. Amtrack has made a joke of the honor of the public train transport with their ill-kept cars that commonly derail, killing many people who placed their trust in the company and the conductor. The conductor was once seen as a revered authority, almost a holy figure, but now is cast down upon the likes of rodeo clowns and pirates. I plan to change all that. Much like the ranger Strider from Lord of the Rings, I have thrown off my traveler's shawl, and have returned to reclaim my hereditary throne as king of the railways, and hopefully also get to bang hot Elvish chicks. I know my friends and family will not understand the path I have chosen, but I know in my heart that it's the right thing to do. As the wise archmage Richard "Deadbeat Dad" Kyanka once said: "I'm the boss applesauce."

But this transition for me will not be an easy one. I know full well that there will be obstacles I must overcome, such as my sexual appetite for young, nubile boys, and my insatiable craving for White Castle hamburgers. There are many benefits to being a train conductor, as well as some negative aspects. Here are just a few of them I've learned from my recent experience as an intern on a train:

Perks of being a train conductor 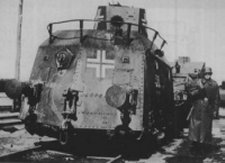 GET ON ZEE TRAIN!

Chicks dig the uniform. It's no secret that the ladies like a man in uniform. This goes for the standard train conductor uniform as well. With the fancy hat and shirt combined with the overalls crafted from very soft, thin fabric, allowing a ghosting of male genitalia, even the most prudent women go wet with desire. It's common for a conductor to have several hundred children in every state in the union, planting his fertile seed wherever his train might go.

Eating sandwiches on the caboose. There's only one thing I like more than eating my roast beef sandwich, and that's eating my roast beef sandwich in the caboose of the train. Although the caboose is often called the "ass" of the train, it is also a place where the conductor and his crew can kick back and chow down on some tasty sandwiches. This is a peaceful, almost Zen-like place for them, giving them time for deep introspection, a time to reflect on their past and future crimes.

Can smash the fuck out of drunk drivers passed out on the tracks. The natural enemy of the train conductor is the drunk driver parked on the train tracks at 2 am. That's why nothing pleases conductors more than slamming into these intoxicated vagabonds at full speed, utterly destroying the vehicle, and ending the life of the hardly sober occupant. The best kind of DK (Drunk Kill) is when the "victim" wakes up right before the train hits due to the light and noise. They either fumble for their keys, futilely raise their hands in front of their face before impact, or (my favorite) scream as loud as they can. Their blood curdling screams of terror blend with the train whistle perfectly, creating a symphony of horror, bringing tears to even the most hard-hearted of conductors. The record number of DK's in one season is Danny "Crazytrain" Manic with 17.5.

Get to make people wait for you. That's right! Who has the power now? When train conductors see a road crossing up ahead, it's common practice to slow the train down to about .25 MPH. Once the train is halfway past the crossing, it is reversed, a sandwich is consumed in the caboose, and then forward again, this time at .1 MPH. This lets all those jerks in their SUVs know who the real boss on land, and if they have a problem with it, they can just turn their stupid plastic car around and try another crossing, where we will be waiting for him.

Get to blow the whistle. TOOT TOOT! TOOT TOOT! Wake the fuck up everybody, a train is coming through! TOOT TOOT!

Disadvantages of being a train conductor 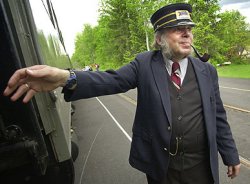