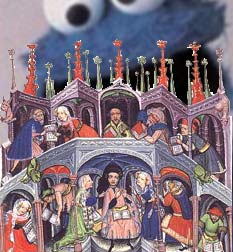 Miscellany.British Author Ben Schott recently released the Americanized edition of his popular book of miscellany aptly entitled "Schott's Original Miscellany". The premise for the book is that Ben, an avid reader, went to his local library and combed through various oddball texts looking for factoids that he found amusing. That's it. There was no qualification about how correct they were or how important, the whole point of his book was just to list hundreds of simple facts that you would probably have no reason to ever want to know.

Seeing as how I'm sort of a writer and I am definitely a master of the Internet I figured I could combine my intimate knowledge of how to type words into Google with my ability to make other words appear from my hands. The reason for this innovative fusion would of course be to assemble my very own volume of original miscellany, a volume that would totally make Ben Schott look like an asshole and make me look like a genius. Unfortunately, I am excessively lazy, and even the simple task of typing random words and phrases into Google wore me out after about two hours. I still managed to totally one up the esteemed mister Schott, but my list of miscellany just isn't as long.

Keep in mind that I used only one source for each item, so accuracy is guaranteed completely thanks to the power of computers!

There are 6,420 different types of buttons used on clothing, including nine kinds made out of human skin and five made out of moon rocks. Human skin and moon rock buttons are only used on the clothing of astronauts and their families.

The deepest non-terminal submarine dive was conducted in 1973, when the US Navy's "Crudcup" descended some 10 feet beneath the surface of the Atlantic. The following day an attempt was made to descend to 11 feet and the vessel imploded. Luckily all hands aboard were able to safely swim to the surface.

The spawn in Everquest with the highest camp time is the Dread Cake Maven camp in Luclin, which requires a whopping 3,200 hours of waiting in between spawns. Many believe the wait is worth it thanks to the Dread Cake Maven's drops which include a pair of boots of sword and a cake knife that regenerates hit points. They are, of course, wrong since it's not worth doing anything in Everquest.

The largest lottery jackpot ever given to a single person was handed out in 1998 to Matt Corely in Lansing, Michigan and totaled 236 million dollars after taxes. Matt purchased a number of unusual things with this money including 5,000 ferrets which he used to fill a pit, a hang glider made out of original Vermeer paintings, and the world's largest coconut. Matt was killed in 2002 when several hundred ferrets running wild on his estate managed to tip the world's largest coconut out of its holder and onto the millionaire.

The role of Darth Vader in the Star Wars movies was played by a white man and voiced by a negro, proving once again that negroes and whites were made to work in harmony.

If the number of unsold DVDs of Mariah Carey's "Glitter" were placed end to end they would create a bridge that extends to the sun. If combined with the number of unsold Atari cartridges for ET they would be able to destroy the sun with their mass. If the sun were destroyed with their mass then the earth would spend the next 10 million years in absolute darkness, ruled over by a blood-drinking cabal of record producers and label executives. Food for thought!

The majority of Hitler's remains are stored in a sealed vault in Moscow. In 1957 a fragment of Hitler's skull washed up on a beach in California and was mistaken for a shark's tooth and put on a necklace with a small sea shell and several sand dollars. To this day it is unknown whether or not Hitler's evil can be stopped.

Most robots obey their programming and would be considered good by all standards. Unfortunately, some particularly sexy and young robots live life on the edge and refuse to play by the rules, giving all robots a bad reputation.

Every movie ever made was based on "Romeo and Juliet" with the exception of "Die Hard 2".

Children who are breast fed during the first 6 months of their life are on average 3-5% more intelligent than children who were forced to survive on bugs that crawled randomly into their mouths.

Despite its name, peanut butter is not made from peanuts or butter, it is made from science.

The national debt increases at a rate almost 10 times faster than a human with a giant stack of 1000 dollar bills could throw them into a bonfire. Even with the assistance of good robots the national debt still increases faster by at least a factor of three.

It is scientifically demonstrable that if every person in Texas were genetically combined with every person in France you would produce human beings identical to the rest of the world only with a lot more arms and heads.

The fastest train in the world is located in Austria and travels at over 300 miles per hour, which is about a tenth of the speed of the world's fastest jet aircraft. Pfff trains…whatever!

There are more bones in the human hand than a whole cat has in its head.

The world's tallest building is located in Koala Lumpur, which is in…uh…I want to say Thailand but that doesn't sound right.

The largest living thing on earth is probably a really fat sperm whale.

Every recorded ghost sighting can be attributed to a phenomenon known commonly as "being a stupid pussy".

Maple syrup is the blood of trees. Think about that next time you have pancakes you fucking monsters.

The "s" on the end of Illinois is silent. Learn it and live it.

Something Awful receives over 200,000 visitors a day, except on the days when Ben "Greasnin" Platt writes an article. That guy is really skewing our averages here.

In the episode of "Alien Nation" where George the alien became pregnant the baby in his stomach was actually made out of corn cobs. This was not done by the prop department, the actor had some eating disorder that made him eat corn cobs and they had to write male pregnancy into the script to cover for his grotesquely enlarged stomach.

Pop Rocks are the second most potent conventional explosive next to Semtex.

John Partridge of Oak River, Idaho constructed a house made from 78,000 returnable glass bottles. No one knows why and most people sort of hate him for it.

I hope you have enjoyed the first edition of Zack's Original Miscellany and if I get a big book deal out of this bad boy I might just do another one. Only of course it won't be free because by then I'll be a big star and you'll have to pay me for my autograph. Suck on that jerks!

Bring on the Payne

Howdy Photoshopkateers, it's your old pal Livestock here to let you know the new Phriday is up and ready for browsing. This week I pulled up a recent forum thread by the SA Goons where they gave movies, TV shows, games, and reality the Max Payne treatment. What's that? Well, it's where you make everything really overly dramatic and abuse Photoshop filters to make pictures that look like the Max Payne graphic novel cutscenes. Yaarrrr, here lies a gander: Yes, do be having yourself a look. No really, go ahead.