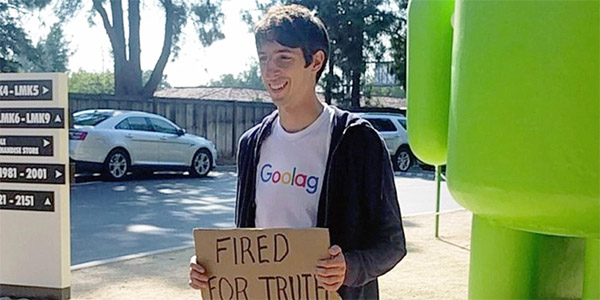 When I was asked to write a guest column for the website Something Awful, I could only reply with "I'll tell you what's really something awful: how PC culture has turned this world into a hellscape for free-thinkers like me." After a few days with no response, I sent another e-mail that said "yes," and here I am. Even with my ongoing gender research--which has transformed from a passion into a full-time job--I do have a lot of free time on my hands these days. And there are certainly lots of productive ways to spend the many hours between frequent appearances on shows where I discuss how my enemies can't stop trying to silence me.

When people meet me, the first thing they say is, "Wow, that's a pretty good cosplay of Alec Baldwin after he stretches his face out in Beetlejuice." After I assure them this is what I really look like, a common phrase I hear in the midst of our discussions is, "Wow, you sure have a lot of ideas, James." Guilty as charged. Why, just the other day, I pointed out that we should respect the KKK, not for their racial hatred or domestic terrorism, but for how they embraced cool Dungeons & Dragons terms. After all, a logical thinker would understand that people are multifaceted, and even the most vile human has some good qualities deep down. After all, I'm a nice guy, and look at how quickly people wrote me off after one innocent memo! I know this sounds like I'm projecting, but I've crunched the numbers and discovered everything that happens in the world relates to me in some way.

People think automatic weapons are dangerous, but I've got something much more powerful, locked and loaded right here (I'm pointing to my brain right now). That's a little joke I like to tell people, and I can safely say TSA agents do not appreciate this use of free speech. Now that I'm no longer under the watchful eye of Google--which I've shown can easily be transformed into the hilarious pun "Goolag"--I'm pretty much free to say whatever I want, whenever I want. And you better believe that sitting around and letting my mind stew is much more rewarding than collecting some six-figure salary anyone can get if they just work hard enough.

I've been turning around some thoughts in my head and have come to realize that people refuse to see any side of an issue if they find one particular part of it offensive. Now, let's work with an extreme example. You might be familiar with Dennis Rader, the BTK Killer? (A nickname undoubtedly concocted as a smear campaign by the mainstream media.) Yes, we can all agree he's a despicable man, who killed 10 people--one of them being a little girl he lynched in her own house and later ejacuated onto. But! What if I told you his organizational skills were second to none? Would you accept this fact into your greater network of thoughts about Dennis Rader? Or would you suddenly make an excuse to leave, and then never talk to me again like certain people did in a certain commissary at a certain giant tech company that shall remain nameless? (It's in Mountain View, California, if you need another hint.)

Losing that boring old job is actually a relief, since now I have so much time to churn this brain butter of mine and release fresh sticks of truth to the world. For instance, "women and children first:" is this really the stance sinking ships really want to take? Maybe you'll want to read my new thesis, "Gentlemen Biologically Prefer Blondes: Why Workplace Hair-Dying Initiatives Can and Should be Mandatory." Did you realize women that ignore you on online dating sites are actually guilty of censorship? For all this and more, be sure to check out my appearances on the following YouTube channels: Buff Centrist Gamer, Free Speech Showdown, The Liberty Report, Red Pill Bulletin, and Anti-Antifa Raichu.