Vladimir Putin Op/Ed: You Are a Joke, USA 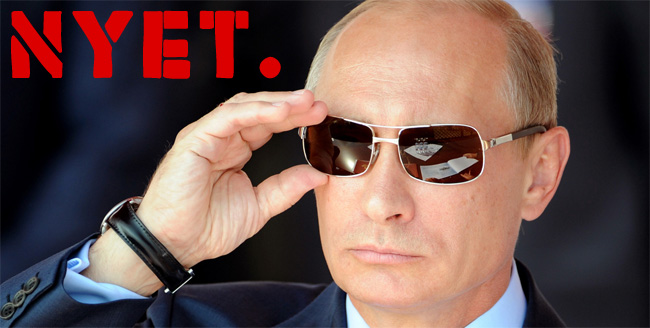 RECENT events surrounding Syria have prompted me to speak directly to the American people and their political leaders. It is important to do so at a time when ratings are still low for our state-sponsored, English-language satellite TV network.

Did you know that RT now has TV legend Larry King as a host? Remember when he retired from CNN a few years ago because he would forget who he was talking to in the middle of interviews? Well, a few years have gone by and we are expecting some hard-hitting journalism from him for RT.

This is beside the point, which is, I have seen flaccid American sneaker Barack Obama speaking about the false accusations of chemical weapons in Syria. I was very pleased to hear that he is listening to sense and will take seriously the proposal of Russia to secure Syria's chemical weapons. It is always important to give peace a chance after 100,000 people have been killed and America has belligerently threatened war. Let diplomacy solve what missiles cannot.

I will personally supervise getting the chemical weapons. I can be trusted because of my many years of experience with the KGB. If the Syrians try to lie to me about where the chemical weapons are I will know this. I caught many liars in East Germany. I had the nickname "bloodhound" because I had a liar eaten by bloodhounds in Dresden. This is more difficult than you think because bloodhounds are very lazy dogs, but I have charisma with animals. 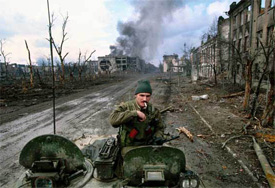 How did USA stand idly by and watch us drive tanks over women in Grozny?You think Russia is bad for being a friend to Syria, but America has many friends that are not so nice. You are good friends with Saudi Arabia. They chop off gay heads, which is much worse than what we do to gay heads in Russia. We only break bottles on them. You are also friends with any government in Asia that will let you set up cell phone factories. You will support a regime that executes people by boiling them in a giant pot if it means pennies less per unit on flat screen TVs. So do not get all high and mighty with me, Mr. America.

I am disgusted by USA bullying. You think you can get your way. If you care so much about civilian massacres why do you not do anything when Saddam massacres his people with gas in the 1980s? Or why do you not do anything when Russia kills every civilian in Grozny in the 1990s? Cowards. You only act when it is convenient. When your selfish interests are at play. Like in Syria, we know that your greatest American aspiration is for another Arab country to be taken over by Sunni fundamentalists.

The United Nations' founders understood that decisions affecting war and peace should happen only by consensus, and with America's consent the veto by Security Council permanent members was enshrined in the United Nations Charter. The profound wisdom of this has underpinned the stability of international relations for decades.

No one wants the United Nations to suffer the fate of the League of Nations, which collapsed after it foolishly kicked the Soviet Union out for proactively defending Soviet borders from Finland's aggression. This collapse may occur if influential countries ignore the United Nations and take unilateral action without Security Council authorization. 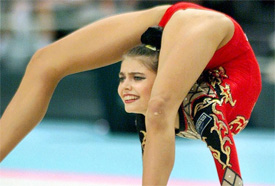 There is no magic to this. It is only my will in human form.Okay, maybe this did not happen the other 650 times unilateral action has been taken, like when you invaded Vietnam or when we defended the Soviet Union from Afghanistan, but this time feels different. Tread carefully.

Most of all, America, you must realize that your power is almost gone. The world is laughing at you, and not in a good way, like a funny joke. This is bad laughing from a rude joke about Ukrainians being born from pig and mule.

You think you have power because you can listen to telephone calls? This I was doing as a hobby as a small child. You want to see power? I turned Russia from democracy to dictatorship in record time. I kill people without drones. I have girlfriend who can place her own buttocks onto her head. This is powerful.

Finally, a plea to America's many beautiful women to place themselves into their bikinis and join me on oligarch's yacht in Zelenogradsk. Stop hanging around these limp American men who do nothing but watch the King of Queens. In Russia we kill monarchs, we do not venerate them with syndication on the TBS. Together we will ride horses and I will shoot a dolphin for you to make a coat. Do you like an eagle? I will kill twenty of them for you. Bald eagles.

What I desire is mine, because I am decisive. I am powerful.

Sorry, USA, you are just a joke.