Freakypizza: The Legend of Grout Man

One day when I was eighteen, my friends Jake and Elliot and I were in the woods, filming our high-school multimedia project, a movie called "Halloween Truck." It was about a truck that was evil because the Druids used it to haul the rocks to build Stonehenge. We were shooting the last scene, where the truck did pentagram-shaped donuts in a field, when Jake's truck ran out of gas.

"This is bad," Elliot said. "These woods are haunted by Grout Man."

Elliot told us the legend of Grout Man, a ghostly being who used his psychic powers to make teenagers steal grout and bring it to his mansion in the woods. He then made them grout the tiles on his patio for all eternity.

"That's stupid," Jake said. "If he's rich enough to have a mansion, why doesn't he just buy the grout?"

"It's his way of getting revenge on this town for not giving him a zoning permit for his patio," Elliot explained.

Jake and I both laughed at Elliot's story, but secretly I think we were a little freaked out. I decided to keep the camera rolling.

We walked home down a maze of trails. In the late-afternoon light the dead trees looked eerie, like cracks in the tile of the sky. From time to time, I thought I heard a weird sound, like a grout scraper scraping against bark. Just as the sun set, we stepped into a clearing we hadn't been to before.

In the middle of the clearing there were hundreds of old grout buckets, stacked into a giant pyramid. Next to them was an equally tall stack of patio tiles.

But before we could leave, there was a flash of light and a man appeared in front of us. He looked like Bob Vila, but shown at the wrong aspect ratio so he was really tall and thin. He also had multiple arms, which were holding various grouting tools. 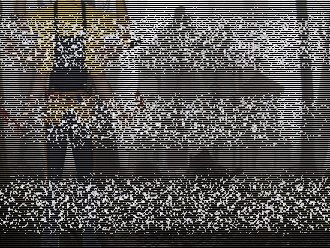 "Hello, boys," he said. "Would you care to bring these buckets to my mansion?"

"So we can work forever on your patio?" Jake said. "Forget it."

"I know my patio might take an eternity to finish," Grout Man said. "But imagine the parties you could throw on an infinite patio."

We all agreed that an endless patio party sounded awesome, so we picked up buckets and followed Grout Man toward the edge of the clearing. We were about to step into the woods when I realized that something was wrong.

"Wait," I said. "This guy looks like he's in his forties. He's probably one of those old dudes who parties with teenagers so they think he's cool, but he's really got a criminal record and does prep at Chilis, and when he's drunk he tells the same five stories over and over again, and if you try to drown him out by turning up the music he just talks louder."

"You're right," Jake said. "He must have us under some weird mind control. Run!"

We dropped the grout and ran down the trail leading home. Grout Man chased us but he was old and weak and basically pathetic so we outran him easily.

We never saw or heard from Grout Man again, but our movie got an F - when we showed it to the class it was just a grouting tutorial video. I've pretty much forgotten about that evening, except that sometimes, around twilight, if I look at the grout in a public bathroom I hear faint party music, and what sounds like people playing beer pong.