Will it ever stop? Yo, I don't know... but I sure as hell hope it does. The avalanche of stupidity started Saturday night when I posted the Awful Link of the Day, a site which I even said was fake and "100% not real." Yet, despite this huge disclaimer, people still flooded the guestbook and posted "U SUCK U STUPED MORON UR DRAWINGS SUCK GO KILL URSELF". It's always nice to see people totally avoid all forms of common sense and rational thinking, even when the obvious answer is right in front of their face.

Speaking of lacking common sense, I just received this gem of an email demonstrating exactly what I'm talking about.

hey man great site. you should pay attention more to your hosted sites tho. that jeff k guy opnly admits hes a computer hacker. i dunno if you would like people like that on your site, i mean what if he gets caught? what if you get him angry and he hacks you?

I'm not even going to comment on that. If I did, I would probably start asking people to code a script onto Jeff K.'s site that murders every other person who sends him email.

The fruits of SA's collective loins... the Geistmag "Cristmas Halloween Special Falsh Movie!!!1" by Jeff K. and myself. It's about 1 meg in size and will entertain you for countless hours. Or seconds.

The greatest review of The Sims ever.

Bubble Boy Goes to Harvard! Miracle Teen Will Spend His Life Helping Handicapped Kids!
Jerry loves dancing at college mixers and says dating is one activity he's looking forward to. "I've been talking to a nice girl. She doesn't mind keeping physical contact to a minimum," he said.

Whiz Kid's Car Runs on Used Cooking Oil... & It Only Costs 32 Cents a Gallon!
After proving the concept that old canola oil can indeed run his car, Nick won top honors in several local, regional and state science fairs. He qualified for the prestigious International Science and Engineering Fair held this year in Detroit. Although he didn't win a top prize there, his work attracted the attention of researchers and auto industry officials.

Satan's Skull Glows White Hot... And Experts Say It's a Warning The End Times ARE HERE!
Budapest, Hungary - The horned skull believed to be that of Satan himself is glowing white hot - and experts sat the bizarre phenomenon indicates that the end of the world is at hand! Medical authorities say that the sinister artifact may have already caused a mysterious illness that is striking down hundreds of new victims every day in this region of central Europe.

The Crystal Skull of Malaga Is Healing Thousands
But since February, officials at the Santa Maria Cathedral, where the skull is kept, say miracles are taking place at a greater rate than ever before. "For more than 10 years, I've seen people flocking to out church, desperate for a miracle," says Padre Tomaso Agular, a priest at the cathedral.

Why Did Space Aliens Kidnap U.S. Scientists?
Top UFO investigators believe space aliens have abducted as many as 27 American scientists in the past 12 months alone. And many experts conclude the kidnappings can only mean one thing: A full-scale invasion of the Earth is about to begin!

The Present is Really the Future - And We're All Living in the Past!
Researchers at the prestigious Salk Institute have proved that our brains don't experience events as they actually occur. They lag far behind reality, so that what we think of as "the future" has already happened.

If you read it on a website or newspaper, it's got to be true! Head on over and take a dip in the pure truth!

Awful Link of the Day: Texas Boneyard Wrestling (thanks Al) - Ahhh, back to the basics; the ever-amusing "backyard wrestling" phenomenon. I never grow tired of these guys. Every single backyard wrestling website looks like the creation of somebody who has had multiple cinder blocks thrown at their head every hour for a week. As a remarkable coincidence, that description can be used to sum up your average backyard wrestling event as well.

During the construction of the new ring I nearly cut my foot off with a chains while cutting scraps the saw jumped right onto the inside of my left foot and left my shoe with two deep gashes. If the chains had been gas powered without the electric kill switch I would probably have some serious damage right about now. The next thought I had on improving TBW was looking for some professional help. 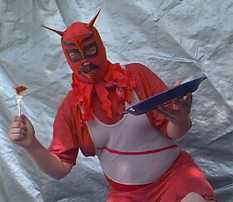 They have made mad, and I am angry. But that's what they want. They want me to be pissed and angry. they want me to be scared of them. They don't want anymore TBW. I'm already mad and angry and by being mad and angry (how could I not be)? they have already succeeded in one of their tasks. But I will not be scared of them and I will not shut down TBW. Instead I'm going to build a new ring and buy 2 big dogs to guard it. And I will not shut down TBW. If they want to come to our first show and terrorize us then let them come but they will not kick our ass and stop us from wrestling. Instead we'll let them fight us in the ring. After we're done with that we'll kick them out of the backyard and give them a video of our own. The first TBW show should be in March. So if Fuzzy and Dangly are listening. Make sure you show up!

Be sure to check out the profiles of all the wrestlers. They make the fools on Cliff Yablonski's site look like lingerie models.

Oh yeah, I just came up with a great idea. Something Awful needs our own "professional" backyard wrestling team. If you have a group of friends who would like to dress up in idiotic costumes and pretend to hit each other a lot, drop me an email and we'll see about getting you a hosted site on SA which details your exciting matches and events. To qualify, you must include a picture of you and your friends dressed up in idiotic gear and striking a true "backyard wrestling" pose. That will prove to me that you're the real deal and all others are just playah' hatahs. Or something. Submit your entries now!