This Update Is Also Illegal!

Sunday, May 27, 2007 by Rich "Lowtax" Kyanka (@TwitterHasBannedAllMyAccountsEver)
While I couldn't make out much writing in the Witches Datebook 2007, I was able to appreciate the finely crafted illustrations of their various silly, false gods adorning each page. There were drawings of entities such as the "Flower Moon." So what exactly is this important "Flower Moon?" I looked it up on the internet and stumbled upon this bountiful batch of useful information:

At the Full Moon, I didn't do a personal ritual as usual. It co-incided with the Beltane Bash, and its finishing ritual was probably better than anything I can do on my own. Jack in the Green, who had been gracing the weekend of talks, entertainment and socialising with his presence, was sacrificed and the Spirit of Summer released. Those present took a bit of his greenery home with them. At the end, Raymond Redfeather, member of the Native American Ojibway tribe, greeted the four directions with his sacred eagle bone whistle. That was a really special moment, because that whistle doesn't usually get used outside traditional ceremonies.

I am logically concluding the Flower Moon has something to do with being an incredible faggot. 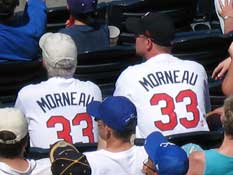 INNING #3: I think somebody got injured. I don't remember. I spent most of this inning laughing at the obese lesbian witches. A run was scored. I do not recall which team scored this run. It was either Kansas City or Minnesota. Smart money's on Minnesota.

Slugger, the Kansas City Mascot, jumped into the stands and began firing off his hot dog cannon. This is simply a cannon shaped like a hot dog, which appropriately launches weiners in the direction of people who want to eat them. Since a baseball stadium hot dog costs roughly $300, most people fight tooth and nail to grab one, then immediately try to sell it back to the stadium vendors for half the price. They say, "hey man, my wife bought this for me as a Christmas present, but I already have one so I wanna return this and get my cash back. No I don't got no receipt but my wife, she's got brown hair and wears shoes so that should be enough proof she bought it." This is known as "Doggin' It," and is almost as lucrative as selling PS3 consoles on eBay. 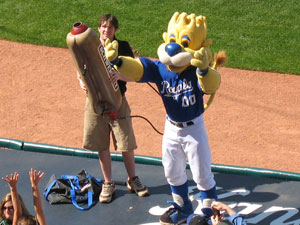 I noticed there's a water-spraying crucifix in the right field fountains that goes absolutely nuts whenever somebody from KC hits a home run. Maybe Mike Sweeney built it in his garage and demanded it spray holy water each time Jesus helps him hit a home run. Needless to say, Kansas City doesn't have to exactly worry about utility bills.

The head obese lesbian witch began doing some weird prayer / chant thing at the bottom of the inning. Perhaps she was asking the high goddess to make corn stalks and birds nests spring up out of the ground and smother Minnesota's pitcher. It didn't work. If I were her, I'd ask for a refund on her Witches Datebook.

INNING #5: More of the same baseball garbage, periodically broken up by fat shirtless men shouting highly intellectual phrases such as "boo" and "go home" in the general direction of unspecified players. 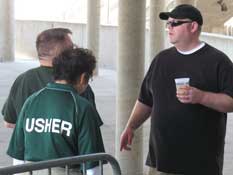 INNING #6: HOT DOG RACE ON THE JUMBOTRON! The daily Hot Dog Race presents animated versions of ketchup, mustard, and relish, all of whom run around a poorly drawn version of ballpark. You're supposed to pick one of them to win the contest. If your condiment wins, well that's just great, you're a true American hero. If your condiment loses, then your life is a meaningless lie and you're destined to die alone. Ketchup won, but I doubt that's who I originally chose. This is why my wife divorced me and I now live in a kitchen cabinet. 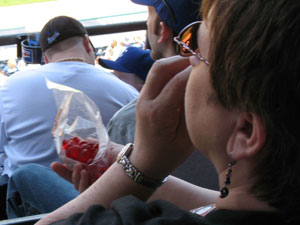 If I receive even a single email from somebody claiming the obese lesbian witches did not actually eat gummy bears, I swear I'm just going to snap and start killing people.

Since the Twins had scored seven runs off the Royals, Kansas City made a wise decision to change pitchers once again, sending in their big gun ace closer Todd Wellemeyer. I'm not sure what the reasoning behind this action was, but I imagine it was something along the lines of "well the Twins were able to score four runs off a guy with an ERA of 6.00, so let's see how they do against somebody with an ERA of 12.71! It'll be twice as hard!" After the game ended, I assume somebody approached manager Buddy Bell and pointed out players should have a low ERA and high batting average, not the other way around. He probably spent the rest of the weekend crying after realizing the only way a Royals pitcher could get a strike is if the MLB Players' Union ordered one.

INNINGS #8, 9: Nothing of interest happened, yet it took a considerable amount of time for this to occur. The Twins put in reliever Joe Nathan, who struck everybody and their relatives out. This was bad for the Royals, because it meant they lost another game, but good for me because it meant I could go home.