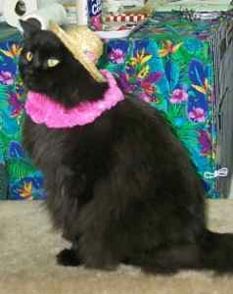 On the 2nd of October this would be the costume equivalent of the Mona Lisa.Americans have been celebrating Halloween with trick-or-treating and the giving of gifts since the days of Jesus Christ. In the early settlements of Biblical Rhode Island it was wooden toys and candy made from boot nails and crab apples. These days the tradition is more akin to a good-natured extortion of prepackaged candy for the good will of potentially mischievous children. It's your usual protection racket with the twist that the thugs doing the extorting are wearing ghoulish disguises. You may ask why I'm talking about Halloween since it's almost three weeks away, but obviously you've never drawn the short straw when costume shopping.

You see there's a window of about five seconds in October when the decent Halloween costumes are actually right there on racks and not in some costume nerd's basement or being sold on ebay for triple price. During that window there is a wonderland of costumes available, from the ultra-popular to the ultra-obscure. Sitting right next to a Vin Diesel mask you would be able to find a costume from Japan for an anthropomorphic pickle that was featured in the pilot episode of a short-lived puppet-themed edutainment show for children about the food groups. This fantasy of good costumes is just that unfortunately, a fantasy, and that window will slam shut as fast as if a truck hauling pig manure overturned on the street outside your house.

When it does close, which it most definitely already has, you're left with two options when it comes to putting together your Halloween costume: make do with a shitty one off the rack or assemble your own. Right now if you went into a costume shop, or even worse a department store like Wal-Mart, you're going to find an extremely limited selection of costumes remaining on the racks. This selection will probably be limited to the following costumes:

Ten costumes that are decent but have been picked apart by the crazed costume vultures that spend all day in the costume aisles shredding the ones they don't want while looking desperately for an ultra rare "Donald Duck with An Evil Face" costume.

A sexy maid or cheerleader costume in infant to toddler size.

A costume of the Indian kid with the retarded "Heart" power from "Captain Planet".

A factory error Ringo Starr costume with a plastic imitation Sergeant Pepper-era jacket and a mask that's actually a hairless version of an Alf mask.

Several dozen Tom Berringer costumes modeled after his character in the film "Sniper" that have been overlooked out of fear of being arrested for the shootings in Maryland.

A Spongebob Squarepants costume that appears to be covered in ketchup stains and smells faintly of carbolic acid.

An entire rack consisting of nothing but costumes for "The Adventures of Pluto Nash" and "The Master of Disguise". 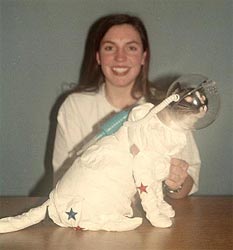 This picture was taken 30 seconds before this cat either dropped dead or clawed this woman's face off.Luckily if you are willing to spend a little time and money on some resources you can create a costume just as good if not better than what you can buy at the store. I have neither money or talent for creating costumes, but like that poor kid from Captain Planet I do have a whole fuckload of "Heart". Over the last ten years I have put together costumes that would make Sam Winston jealous for the same or less than what I would have paid if I had purchased my costume at a store. To help save you the effort of being creative and coming up with your own costume that you will wear a grand total of once I have reproduced the absolute cream of the crop in my costume cookbook. These are guaranteed to turn heads and make you the belle of the ball assuming the ball has something to do with making homemade Halloween costumes.

The Severe Burn Victim - This is one of the easiest and most cost-effective costumes you can put together this Halloween. To make the costume you need either concentrated acid, fire, or some sort of alien with acid for blood you can kill and then rub on your skin. The more coverage you get when applying the fire or acid "makeup" the better the costume, particularly when it comes to burning your face. Bonus points will no doubt be awarded at any costume contests you attend if you actually burn off your hair and melt plastic and/or solid steel into your skin. You are a surefire winner if you are burned by grasping a superheated medallion that sears a pattern into your palm and provides you a key for unlocking the hidden location of the Ark of the Covenant.

The Improvised Robot - Even cutting-edge technology is generally based around two simple staples of electronic engineering; duct tape and random machine parts. By fusing these two components together with the sturdy frame of a cardboard box you have a recipe for the most advanced robot this side of some top-secret CIA killdroid laboratory. The only thing you really need to consider when selecting the random machine parts you will use to give you a robotic appearance is weight. Nuts, washers, and Radeon video cards are in this year. Steel girders, machine presses, and automobile chassis are out this year.

A Mighty Warrior - By eating the brains of your fallen enemies you will take on their strengths and knowledge. Murder a warrior and devour his brains and you can stick a fork in the preparations for this costume. Watch out for cannibal disease Kuru, it can be a real buzz kill.

Japanese Tanuki Costume - I don't even think I spelled "Tanuki" right, I don't really care though, it's basically Japanese for "raccoon thing". This is a pretty involved costume but it makes up for it by being nearly free. What you have to do is use a length of twine to set snares to catch 8-12 adult raccoons, the number you need depends on your body size. Once you have the number needed to cover your entire body you take the same twine you used to snare the raccoons and you tie them to yourself with it. The raccoons may bite, a lot, but they generally aren't carrying any lethal diseases. As an added bonus to this amazing AND interactive costume you can also wear it to anime conventions and possibly win fabulous cosplay prizes.

A Homosexual - Seeing as I know about homosexuality only from what I read in extreme right-wing Christian magazines my idea of a homosexual costume might not exactly match up with reality. First of all you need to jack off constantly, if at all possible into the anus or mouth of another man or even better a young boy. Be sure all of your bodily fluids consist of nothing but the HIV virus. You should be able to see the virus moving in your semen, if you can't then get back to distilling that AIDS! Once you are walking around and spraying AIDS everywhere you should also consider eating babies and burning bibles. If you can somehow make a pact with the devil and form an alliance with the Zionist world government while you're at it, then this might just be the best costume ever!

I hope these costuming tips will help you when the time comes to go trick-or-treating. The best thing about my costume suggestions is that they're all appropriate for children, well except for the homosexual one. Oh, and the one where the raccoons are biting you. The burn victim one might get you arrested if you help your kids out with it, and uh, I guess the warrior one is probably bad for their developing bodies. Looks like little Billy is going out on the town in a shitty robot costume again this year!!

I'd Buy That for a Dollar!

Livestock and the always entertaining Something Awful Forums once again bring us an installment of Photoshop Phriday. This time they set their lasso tools to "fun" and outline hilarity in the form of Classic Produce Labels. 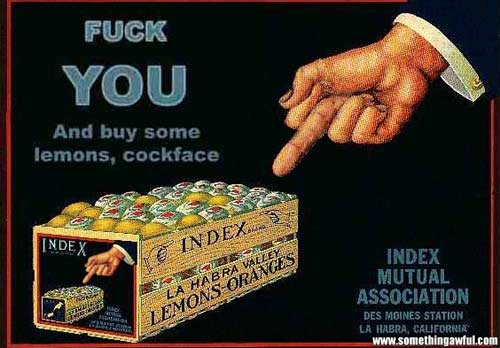 I hope you won't have sour grapes, because one bad apple can spoil the whole lot, and we wouldn't want you to OH JUST KILL ME NOW! And after you're done murdering me, head on over and check out this week's Photoshop Phriday!