Learning to Cope with Alien Occupations 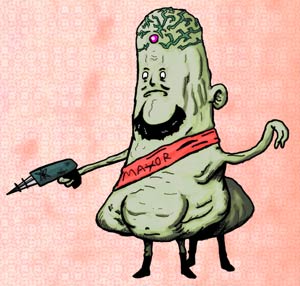 It's everyone's worst nightmare. The alien ships appear and hover over our capitals like ominous clouds, and then they become our capitals. The hours tick away, disappearing into the unknown graveyard ethers of time along with our freedoms. Soon, the jackbooted thugs of a cosmic cancer are marching through the streets, trampling everything that stands in the way of their complete dominance. Mankind loses ground quickly, and soon humans are but beasts shepherded about from cage to cage on a long journey towards inevitable death. Congratulations, you are now living the nightmare of a horrifying alien occupation of our beloved planet!

Should you find yourself in the unlikely scenario of living in an alien dominated society, there are a few simple steps you can follow to stay happy and healthy. The important thing to do is not give in to fear, because that's exactly what they want you to do. These alien slimebags came a long way to see you squirm, so be sure to disappoint them with a positive attitude and good posture. Because of years of dwelling in subterranean munitions factories beneath poisoned atmospheres and living in cramped, poorly lit space craft, aliens have terrible posture and are naturally envious of anyone with good posture.

Step One: Power in Numbers
You can't expect to overthrow an alien occupation on your own, not unless you are God. If you are God this article does not apply to you. I should also remind you, God, that you have more important things to be doing than reading this website. Also, please fix the burning when I urinate problem. No, to properly overthrow the full might of the alien oppressors, you will need a good solid army of reliable and dedicated alien toppling enthusiasts. You'll find such specimens all throughout the neighborhood. In every house, in every bar, in every local shop, they exist waiting and ready to join the fabled resistance if only you give them the chance. You should probably do that.

To do this you need to organize regular support groups that appeal to the downtrodden ranks of mankind. Believe it or not, this is as easy as winking at the right person at the right time or just by going up to them and yelling, "HELLO, I AM FIGHTING THE ALIENS! WILL YOU JOIN MY IMPROMPTU RESISTANCE MOVEMENT?"

After you recruit a small band, instruct them to recruit people they know and begin meeting at a secretive location. The best kinds of locations are abandoned warehouses or factories, abandoned sewer systems or subway stations, or bingo halls if you can get a good rate. Depending on the bingo hall, it might help to mention to the owner that you're friends with Joe.

Be sure to brand your movement with a creative and catchy logo that you can graffiti around high population areas and secret meeting halls. This will help your fellow resistance members locate each other and mark territory. Some good ideas for logos include Calvin urinating on a UFO or a clown blasting an alien in the face with a bottle of seltzer water. Make sure the clown has good posture.

Step Two: Be Respectful to Your Cruel Occupiers 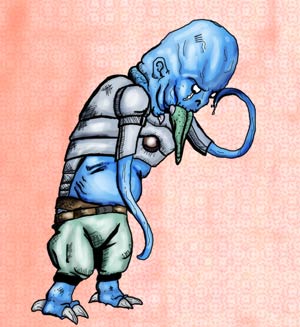 Your nefarious occupiers are looking for any chance they can get to do you in. Because of this, you should extend every effort into being courteous and polite to them. This will ease any suspicions they have about you, which in turn will make it easier for you to plan against them. Keep in mind that although they are evil and would gladly plug wires into your brain to torture you with haunting images of the millions of worlds they've slaughtered, they are people too, in their own special way. Just because they're bullies doesn't mean that they don't have feelings. You would probably be a crabby bee if your Hive Queen didn't show you enough love in the Central Birthing Nexus on the third moon of Tramlon, too. Think hugs, not nightmare brain plugs. Be sure to compliment them on their posture whenever possible.

Should you do this successfully, there is a good chance you might even make friends with one of the occupiers, gaining a valuable speedburst power-up to accelerate your journey on the road towards victory.

When building a resistance movement, you want to properly structure power so that it is not all centralized on one lone, stoic figure of pure shimmering heroism. A lot of young rebellions make the mistake of rallying around a central figure, and end up in a world of trouble when that figure fails them. Your messiah doesn't look so promising when you find out he is incapable of talking, or injures his groin and has to be pushed around in a wheelchair. And what would happen if the aliens got a hold of him and brainwashed him? Pure trouble from mountain to shore, that's what.

Instead, establish a committee to handle all aspects of the resistance and to make decisions democratically. It will be a lot harder for the aliens to compromise your grand mission and if there are multiple leaders. Be sure to take on an important role in this committee, as you don't want to end up as another faceless cog in the newly bustling human resistance industry!

Congratulations! You're finally ready to knock those alien occupiers out of orbit and back to the depths of outer space where they belong! To do this you will need to mobilize your loyal army into completing a series of dramatic attacks designed to highlight the weaknesses of the occupiers, and in turn coerce the indifferent population to rise up and fight back. This also means that you are a terrorist, so be sure to make sure your side wins. Think of this day as a PowerPoint presentation. What points do you want to get across? What do you want people to take away? It's important to keep the audience enthralled and enticed as you fire round after round of bullet points at your enemies.

By now the aliens are hanging their necks as they always do because of bad posture and are running back into the voluptuous abyss of outer space. This means that the committee in charge of running the resistance is now in prime position to move in and take over all the oppressive duties once carried out by the alien occupiers. The beautiful cycle of domination has now completed one revolution.

I do have to admit I have never lived in an alien occupied world, but I have a feeling that I might one day live in one. I base my strategies on overcoming alien occupation purely on common sense and a love for beverages and good posture. I think those are the traits that make us most human, and thus are greatest strengths to use against enemies.