The Zen of Ant Farming

Today is a day of healing and rest for all you troubled Internet travelers. With the war in Iraq dragging on with no end in sight, the crippling economy causing mass layoffs, the rising rate of cancer in small children and kittens, and Martian Scorsese being denied a "best director" Oscar once again, it's easy to lose your faith in humanity and civilization in general. I am a firm believer that the human psyche is far too fragile to handle the fast-paced modern world of rush hour traffic, home delivery pizza, and those whirly, sexy helicopters. I used to think it was just me with this problem, hiding in my dark dilapidated New Orleans house strewn with dead rats and wearing musty Victorian garb while playing Vampire the Masquerade over the Internet, but it seems that I'm not alone. I get countless e-mails from very depressed individuals who are sick of the everyday grind and keep asking me for blowjobs, so I tell them they sent it to the wrong front page writer and forward them to Corin Tucker's Stalker. I have yet to hear any complaints from his end.

We as a young collective of independent thinking students and IT lackeys need to keep ourselves mentally healthy and focused on the simple things in life so we don't get too mired in the meaningless scramble for materials and riches. Today I want to share a little trick I use to keep myself sane after all of these long years of playing in the rat race. It's called an ant farm, and I'm sure you've all heard of it before. Yes, the simple joy of watching a community of ants work together as a team to build a tunnel network system like busy little Vietcong is delightful and amazing. Now don't get too intimidated with the thought of having the responsibility of an ant farm. It's relatively easy to control, and once you have the hang of it, you'll laugh at yourself for being such a goddamn pussy about it. Don't worry, I've been doing this for a few years and will walk you through some of the basics of ant farms. Let's get this party started.

The Empty Canvas
The first thing you need to do is to build the habitat that your unwilling insect participants will be living in during this most noble of gentleman’s hobbies. You could just go to a hobby shop and buy a case if you are completely lazy and have no honor or sense of self-worth, but if you want it to have your own personal feel to it, like it should, then you should make it yourself from materials you can scrounge up around the house. I made mine out of cardboard, used cigarette butts, melon rinds, my 10 collector issues of DC’s “The Death of Superman”, and my car windows for the glass observation panes. Sure it's winter and below freezing in Michigan, but after most of the nerve endings in my face die off on the drive to work it's not so bad. Sand is generally easy to get, but like I said, it's winter and the ground is frozen so if you are in the north you might have some problems. I just used my grandpa’s ashes that were just sitting in that dumb urn in the closet. With any luck, my ant farm will become a haunted kingdom, and so could yours if you make sure to bury a few Indian bones below their settlement.

Logan’s Run: The Next Batch
Next you need to get the actual ants that you will seal inside your funhouse of madness until their untimely demise. There is no "right" way to catch ants. It’s a trial and error sort of thing that you figure out as you go. Personally I like to use an old tire, a jar of peanut butter (chunky), a few dozen mouse traps, a kite, and a wristwatch. Don't ask me how it works, for I shall never divulge my secret ant catching methods, and I'm currently under a federal indictment for an accident involving catching ants, so I'm not supposed to talk about the matter until after the sentencing. I will say this, ants are far more cunning than they seem, and you really have to get into their devious, dirty little minds to be successful when hunting them. If for some reason you totally fail at securing some ants for this project, then you can always order some sea monkeys and pour them into the ant farm. I have to warn you though, they do not look like they do on the back of comic books, like a feudal kingdom of happy sea folk living under the ocean, and sort of just lay there and die. It's amusing for a few hours, though. 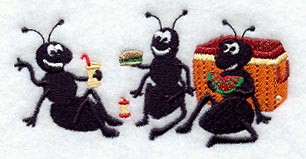 I am not going to comment on this picture because frankly I find it extremely racist.

Watch, Learn, Grow
Now that you have your ants in your ant farm, and you toss a bit of corndog in for their food supply, it's time to sit back and watch the miracle of life unfold before your eyes. At first they may be confused for a bit, wondering what happened after they walked into the flaming peanut butter tire and were chloroformed with a rag from behind, but after a while they will start associating with each other and start working as one unit. Not unlike a flock of Japanese businessmen, the ants will quickly jump into production mode. Some are designated as the engineers, directing the rest on the digging project; others will be the mules, doing all the hard labor; and still others, like one I named "Stinky", will sit on his thorax and collect welfare while everybody else works. On the first day things may be a little slow, but after you wake up the next day you will be amazed at the progress they made. In fact, I thought it was so cool that I called in sick to work for a week saying I had a rare Asian bird flu, just so I could sit at home and watch the little fuckers work. I'm glad too, because if I decided to go to work instead, I would've missed Stinky throwing a rock on Piggy, becoming the undisputed tyrant of the ant kingdom.

Work Will Set You Free
You may notice a lag in ant production from time to time. Tunnels will be haphazardly made, food stored improperly, and the general spirit of the community will be one of carelessness and sloth. This happens to all societies from time to time, and it's what we call a recession in the economic world, or a "Detroit" in my regional area. Sometimes as the master of their world you need to rattle the cage a little bit and kick them in the rear. When my ant farm suffered a major lull during the summer of '96, I was forced to take extreme measures. I erected a sign over the "Ant Labor Camp", saying "Ausgraben wird Sie befreien setzen", or "Digging will set you free". Then I made examples of the least productive members of the society - the artists, the handicapped, and English majors. Stinky was crucified on the mound as an example, and a few others were set under a magnifying glass. Some ants were given fancy hats and medals and turned against their brethren, reporting any lack of spirit and enthusiasm to the master ant, who sat in his bunker all day and played Boggle (the tiny ant version). Soon production was in full gear again, and the glory and honor of the ant empire was restored, until they declared war on me and invaded the refrigerator. So I was forced to disarm them and flood the bunker. 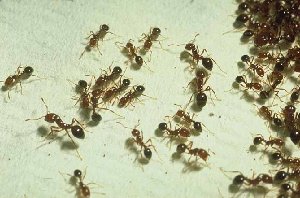 These are my ants having a dance off. The one on the left just got served if you hadn't noticed.

Ant Soup for the Soul
So now you are asking why. Why spend countless time and money, risk life and limb, and face possible PETA boycotts just to start your own ant farm? The basic concept of an ant farm is control and perception; balancing the Zen power that lives in your mind's eye. There is a good chance that in your current life you have little or no control of the daily actions you are forced to partake in. Every morning you follow the same routine, taking a shower, brushing your teeth, driving through morning traffic to work or school and, as such, becoming institutionalized like a prisoner. When the white man first came to America, the natives said that our "spirit was sick", and that we had no soul. Maybe they were right and we are so concerned with mundane and trivial details and self-serving goals, that we have lost sight of who we really are. What the ant farm brings to us is a realization that we are just like these ants. We live, we work, we toil, and then we die. The only difference is that we have a choice, and after watching your art farm for a while, I'm confident you'll make the right one. Be kind, please rewind.

The End of Days
By this point you're probably sick of your ant farm and this update in general, so like any terrible and fearsome deity, it's time to cleanse the farm of its sinful inhabitants for having premarital ant sex and taking your name in vain. The method of the apocalypse is up to you, but I personally like to blast the farm with a large fireball from a blowtorch and then sweep the landscape with a great flood. This is not necessarily a bad thing, for it represents a cycle of death and rebirth in nature. Once all of the ants are dead, you can start a new population and see the cycle of life start over again. Remember ants, Stinky died for your sins.

I hope this update on self-healing and mind control helped you, and maybe even fostered an inkling of curiosity in the mind of skeptics and my detractors. I know there are a lot of people who disagree with my use of ant farming for Zen philosophy, and have even started a group called FSBDD (Frolixo Sucks Big Donkey Dicks), that protest and heckle all my seminars, and even call me late at night and pretend to be my long lost uncle, costing me thousands in phone bills after reminiscing for hours. Despite this adversity, I have faith that this will catch on with all you young people and one day I will be rich and famous and crush all my enemies like tiny, little ants. Have a good weekend and God bless you all.