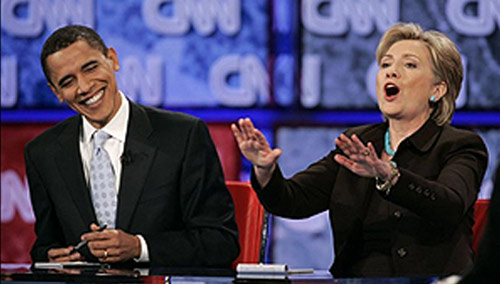 Candidates emerge from giant clam shells. Blitzer on chariot pulled by porpoises, a golden trident in his hand.

[Update] It's Blitzer's phone. He finally answered the phone and he's shouting pidgin Japanese over Clinton's response on insurance mandates.

Great question about NASA someone submitted to Politico. "What about NASA rockets?"

Obama: "Double rockets. Faster and shoot them farther away. More people in a rocket. Slingshot it around things like using a gravitational field. Find a better planet. Go to Venus too."

Clinton: "Triple rockets. Double rockets not good enough. Rockets full of teachers and prayers of Jesus and Bibles. Put a Bible on a moon somewhere. Find a planet made of gold."

Kernel panic on Wolf Blitzer. Cut away to a standby card and "Janie Got a Gun" while they reboot him.

Blitzer refusing to answer to "Wolf," calls it a slave name. Demands to be called Pharaoh Jupiter.

Question about censorship. Good answer from Obama on Americans loving ass and titties, but dicks taking it too far. Pussy good too but only in wide shots and only if you can't see up inside it.

Clinton responds that she wants no more bleeding cocks in videogames. No more skulls on cocks or dead body cocks. Good dog whistle on the Skull Cock Island controversy going on right now.

Things are heating up!

Obama: "I was feeding babies and building houses while you were berserking the eastern shores with corporate lobbyists."

Clinton: "I was working to solve baby problems for babies and mommies while you were building skull thrones for your dread lord Rezko." 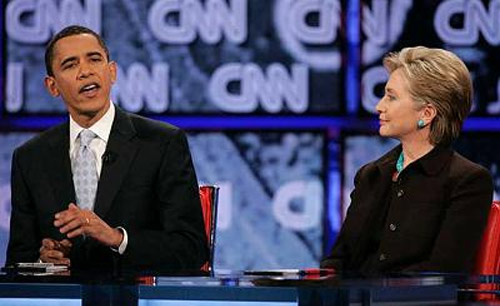 Was that Vic Tayback in the audience? In the hammock. I thought he was dead but I would swear that was him.

Obama: "I'm like that black college in that movie where they debate Harvard. Nobody expected me to win, but look, I'm beating Harvard. Morgan Freeman was in that. Remember Morgan Freeman in Deep Impact? Think about that if they find a meteor."

Clinton: "Imagine a continuation of the Clinton administration of the 1990s, but with all of the expanded executive powers added by Bush. Plus a huge war and a recession."

Blitzer: "I promise to never raise taxes even if I spend all of the money in America on Dippin' Dots. Mmmmmmmmmmmm!"

The closing shot of Blitzer rubbing his belly while Clinton and Obama ascended their fireman poles is probably one of the most memorable moments.

I'll see you guys in the spin room!