ABC's Lost and the Worst Villain Reveals Ever

Most of you have probably either given up on, or, god-willing, never started the twisted mass of abandoned plotlines and broken hearts that is Lost. But some of you, like me, insist on subjecting yourselves to hour after hour of vague shit happening somewhere off camera while Jack and Juliet and Kate grimace at each other cryptically and set up the world's laziest cliffhangers with lines like "My secret plan is…hmm, maybe I should delay telling you for no real reason until next episode". If you are part of that unfortunate minority, then you were probably shocked this week to see an honest-to-goodness, actual, kinda, sorta, semi-answer to a major mystery

If you don't watch Lost, then what I'm talking about is the fact that they showed Jacob this week. Jacob is the mysterious leader of the malevolent Others, a person of (possibly?) fathomless power and (maybe?) unbelievable malice. Jacob was basically the unidentified super-villain of the last two seasons, and one of the main questions for awhile has been: Who is Jacob?

And the answer this week was quite definitive: Jacob is a goofy, semi-invisible, pirate-looking ghost with Scooby Doo ghost powers like shaking walls and haunting small houses. He was moments from pulling off his wig and revealing that he was actually the prop boy in disguise and mentioning that he would have continued shaking small items in his house if it hadn't been for those meddling kids. Which brings me, in a not so round about way, to the topic of my article: 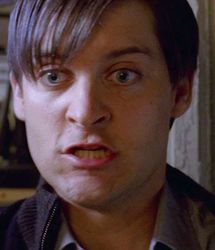 Comic book movies are just like regular movies, except that certain fans will do their best to reconstruct the entire plot from early interviews, and put together enough pre-release screen shots that they could watch the entire movie by flipping through them really fast. So keeping villains secret is near impossible, and rumors of Sandman and Venom and that other guy who looks like Ryan Phillipe as Robocop were everywhere before the movie was even done filming.

Because of this, fans were stunned, come release day, to discover that the movie's real triple threat was an overlarge budget, an overloaded script, and an overlong running time. Also I guess Spiderman turned into a black guy for awhile, and Venom was in and out faster than that ugly face in The Exorcist, except Topher Grace isn't quite as attractive. Surprise!

The previews came as close as they could to calling this movie "Signs 2: This Time With Amish People", but this was only to cleverly disguise the true villain of this movie, which was a mentally disabled Jew in a hedgehog costume. I wish more movies would have gone with this particular brand of bad guy (handicapped Jew dressed as hedgehog), as I feel it is a rich vein that has hardly been tapped.