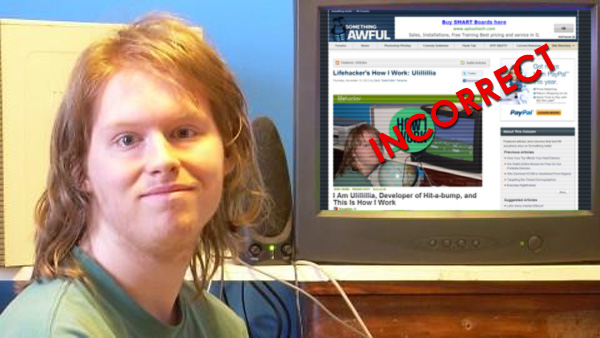 On November 15, 2012, Something Awful published an article that parodied Lifehacker's "How I Work" series, which profiles the working habits and workspace of twee creatives. As part of this parody, the subject of the "How I Work" feature was a fictional interpretation of acclaimed game developer, author, and pizza degreaser Nick "Ulillillia" Smith. The parody of Mr. Smith was well-meaning and intended to be faithful in spirit to the real man.

Subsequently, some have questioned the accuracy of this portrayal of Mr. Smith. One reader, in particular, offered a detailed 18-point critique. He goes by the name Nick "Ulillillia" Smith. Because this critique was so thorough, and our errors were so egregious, we offer Mr. Smith's response in full. To help clarify Smith's corrections, we have added key excerpts from the article throughout.

1. Well known for The Supernatural Olympics. This old game is horrible. Platform Masters, despite the near-complete lack of game play, is already miles ahead. Just one setting alone is already miles ahead. Look at Jeremy's House, Lake Keveran, or the Sentus Mountains. These worlds are so much better for their scenery than TSO. TSO doesn't even come close to that, even that little tiny thumbnail I have for my avatar. When PM is done, I'm releasing TSO as 100% pure freeware (closed source though) with no support. Gamestudio's limitations ruined that project. That's why I switched to C and the limits in Platform Masters are so extreme that human life spans are too short to encounter them (who can live 500 years to max the score or even just the roughly 10 years to max the lives with constant 24/7 play of doing the same thing over and over again?).

"Current computers: I currently need a new computer. Read the FAQ page about what happened with my computer and the juice cup."

2. Need a new computer. I don't need a new computer. The i7-2600K CPU is one of the top-notch processors around and the GeForce 460 is quite up there (though mainly used for fast video decoding). I do need to upgrade the OS (very limited funding prevents it) though. The sound card is a little out of date but over 5 years, they haven't changed much. My 4-year-old TV tuner is working very well for me. Sure it doesn't have HD capabilities at all, I have nothing that outputs HD in the first place (outside my camcorder, of which is not TV or games) so I don't have any need for HD support. Right now, upgrading the OS is near the top of my priorities since almost nothing is supporting XP any more. The only exception is if something dies on me, preventing me from using my computer, and I need to replace it.

"I have a computer PC with a keyboard interface and I also use the mouse. I had a Gravis joystick but it has lost strength and only turns left. I am repairing this currently."

3. I never heard of "Gravis" and I've never used a joystick on the computer in the last almost 20 years now. I have zero joysticks in my possession.

"I keep three types of altoids on my desk (Wintergreen, Peppermint, Spearmint) within reach. This is helpful with my breath issue (see Problems FAQ) and gives me a 2.5 energy boost when I am getting slower at programming. I had a lamp but it was taken away because I was melting pieces of plastic onto the lightbulb. I will get it back when I clean up the scrap plastic from my sprues."

4. I don't like peppermint with any kinds of mints. I only have wintergreen and cinnamon.

5. I've never had a lamp taken away nor have I melted anything on one. I've been using my small lamp for almost a decade by now and I've swapped out quite a few light bulbs in its history including one of those long-lasting compact fluorescent bulbs.

7. "I dream during irregular sleep". That's false. One dreams typically 5 to 7 times a night, with only the last one being recalled.

8. Dream 1-1 is not my favorite mud dream. There are favorites in the "fun category" that would have been in the mud category, but with the fun rating so high, it goes into the fun category regardless. I haven't forgotten that dream much though.

9. When I don't go to the lake, I don't run around on hills. I go there for swimming, throwing rocks to skip them, and various other things.

"I am at my healthiest in the 3.25 hours after I have eaten the meal I have every day."

10. Timing of meals has no effect on my health.

"My normal meal is pizza, which contains high calories but this can be reduced by degreasing the pizza using napkins."

11. Though not an all-out error, I primarily use paper towels instead of napkins for degreasing. Paper towels are far more effective and they practically never stick like napkins pretty much always do (they still do, depending on various circumstances (grease level of cheese and the food's temperature being the main ones).

"A 5.0 usefulness tip I have developed is one so that you do not spill a soda. I call it the soda trick. When you buy a 20-ounce soda in a bottle do not open it right away. Whenever you want to take a drink, open the lid and listen for pressurized gas sounds. If you hear them do not continue."

"I have developed many tricks to increase my math speed and power. I could do an entire 4th grade math book in my head within 2 months. I could compare the slope of any mountain using the hand trick to determine the average slope of the mountain range in one day. I can calculate mud depth using the ruler trick and determine calorie removal during degreasing in only 45 seconds."

14. The hand trick has nothing to do with slopes. That's probably a reference to the calendar trick.

16. I have no idea how many calories I'm taking out with degreasing. I've never found out. I'm only guessing.

"I keep getting better at this skill. I have not seen any person who could rival this speed."

17. I never use those 2 p-words and that article thinks I do. 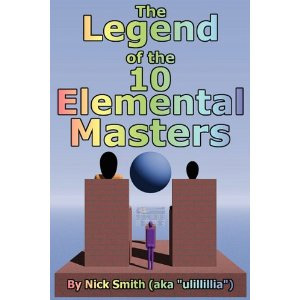 18. The book cover is off considerably on the color, highly muted. Compare that to this: 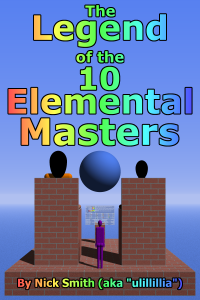 The only item we will attempt to defend is the book cover. We used the image available on Lulu.com, the book's retailer. For all other items, we defer to the authoritative expertise of Mr. Smith. Our only means of repairing this damage is to offer our humblest apologies to Mr. Smith and his family for any harm we may have done to him or his reputation. We are all looking forward to Platform Masters and based on Mr. Smith's latest Youtube videos we know we will be in for a treat.