My 60 T-Shirt Submissions to SnorgTees.com

SnorgTees is a popular website where you can buy t-shirts with references to Doctor Who and memes and Fucking Science. In a way, it is the prototypical modern website - not funny and relentlessly profit driven. One day, I was reading their "about" page, and this interesting little paragraph caught my eye:

"72% of the hilarious designs are the brain children of crazy Snorg meetings, but 28% of the awesome design ideas come from you, our customers. Basically, if you think you've got a great idea, send it our way and there's a good chance that you will be able to wear your coolest thoughts."

When I read the sentence "the brain children of crazy Snorg meetings", I immediately know I could come up with better ideas then SnorgTees. And when I read that they pay $150 per shirt idea, I knew that I had to alter my life in every way to be geared more towards t-shirt slogan production. What follows are my own original t-shirt ideas. Please do not try to steal them - I have already sent them to Snorg. I'm sure they're already a major topic of discussion at the crazy Snorg meetings.

You said to submit t-shirt ideas to this e-mail address, so here are some I have come up with. Please let me know if you like any of these. I will admit to having grown attached to several of these ideas, in the same way one would grow attached to a slightly broken rental car over the course of a disappointing holiday.

1. cartman of south park in the spread eagled "westworld" pose. text: Southworld
2. mortal kombat battle with a rock with full hp standing over a pair of scissors with 0 hp. text: finish him!!
3. a smiley faced strip of bacon and a smiley faced fried egg holding hands with text reading "BFFS" 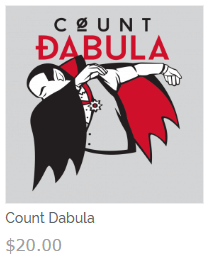 4. pikachu with bart simpson's hair and face, firing a ball of electricity out of a slingshot made from its tail
5. rené descartes doing the "duck face" and taking a selfie. text: "I insta, therefore I gram"
6. completely black shirt with text in small letters reading "I can't wait to get back on the internet."
7. Big, flowery letters, surrounded by musical notes and tablurature: "I love ALL music!!" smaller, understated letters: "except rap and country."
8. huge human silhouette towering over several smaller human silhouettes, in front of a background of green 0s and 1s. Text: "I'm big online"
9. on the left someone is holding a selfie stick with a phone in it. they're looking towards someone on the right who is holding a selfie stick with an old fashioned CRT monitor in it. they're clearly having some trouble holding up that heavy CRT monitor.
10. Spock from star trek holding a lightsaber. text [in the star wars font]: "LOGIC WARS"
11. a version of notorious B.I.G with a normal sized head and comically tiny torso/arm/legs. Text: "NOTORIOUS S.M.A.L.L"
12. A picture of a plate with a single strip of bacon on it. text: "Bacon is just okay."
13: Top: big block text reading "STEAK PUNS". middle: a picture of a t-bone steak. bottom: flowery, cursive text reading "A Rare Medium, Well Done"
14: a picture of a horse wearing obi wan kenobi's cloak with a lightsaber on the ground next to it. text: "May the horse be with you"
15: the two daft punk guys wearing mario bros hats with the letters G and T respectively. text in the super mario bros font reading: "SUPER DAFT PUNK"
16: a clock in bed. it has a face and its eyes are screwed up and a speech bubble that says "Ughhhh... five more minutes"
17: A picture of a cup filled with coffee. text on the side of the cup reads "ALL THAT STANDS BETWEEN ME AND MURDER"
18: Two people arguing, both are drawn in that really 2D looking medieval art style. A speech bubble leading to one of them reads: "Ye needst more perspective"
19: a jigsaw puzzle that's complete except for one piece next to the piece needed to complete the puzzle. both have little smiling faces. text: "You complete me."
20: darth vader is holding a lightsaber handle in his hand. the handle is shooting out a red laser, like a laser pointer, onto the floor. a cat dressed like luke skywalker is chasing after the laser dot.

Again, I hope you like these ideas. Eagerly awaiting your response.

Hello. I have previously sent you 20 t-shirt ideas, and here are 20 more. The numbering starts from 21 because ideas 1-20 were sent in a previous e-mail. To be entirely honest, some of these ideas are quite a bit better than the first 20; while some are much worse.

21: a picture of a slice of pie in front of a clock. text reads: "OH LOOK AT THAT, IT'S PIE O' CLOCK!"
22: picture of a green 1-up mushroom from Mario. text: "Get a life."
23: waldo/wally from where's waldo/where's wally leaning out of the door of the TARDIS from dr who holding a sonic screwdriver [also from dr who]. text: "Doctor Where"
24: bill and ted from bill and ted's excellent adventure riding in the delorean from back to the future
25: two thrones, each holding a game controller, playing a 2-player video game on a small CRT TV. text: "Game of Thrones"
26: The curiosity probe holding a gun with smoke coming out of it in front of a cartoon cat with Xs for eyes and a small hole in its head.
27: a lightbulb sitting down and holding a clipboard, next to a lightbulb lying down on a psychiatrists couch. text: "Ah, but you have to WANT to change."
28: picture of a mega mushroom from mario. text: "Grow up!" 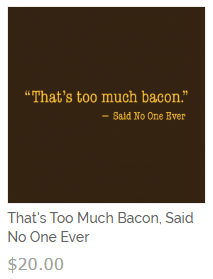 29: text: "Did you hear the one about rhetorical questions?"
30: top text: "A hardcore gamer, a pop culture junkie, and a genius walk in" bottom text: "...and put on this shirt"
31: text: "My other shirt is clean"
32: a picture of a game boy with a smiley face on the screen, and long eyelashes, and a small bow. text: "GAME GIRL"
33: A big arrow pointing up accompanied by large text reading "MY EYES ARE UP HERE". below that, medium text reading "AT LEAST, THEY SHOULD BE". below that, small text reading "IF THEY'RE NOT, SOMETHING'S GONE SERIOUSLY WRONG".
34: text readiing "THERE ARE ONLY TWO THINGS I LOVE: SELF REFERENCE and THIS SENTENCE"
35: marvin the paranoid android from hitchhikers guide in front of a jeopardy podium. he has 42 points
36: a pokemon battle, with a cup of coffee [labelled "coffee"] battling against a calendar [labelled "mondays"]. mondays has no health left, and a text box at the bottom reads "It's super effective!"
37: a picture of spock from star trek dabbing. text in the star trek logo font reads: "STAR DAB"
38: a picture of a coffee cup with some strips of bacon in it. caption reads: "Don't talk to me until I've had my bacon"
39: text: "2016 WAS NON-CANON"
40: a picture of sonic the hedgehog wearing a mario hat. text in the final fantasy font: "HALO"

I hope at least one of the 40 ideas I have sent you tickles your collective fancy. Some of these ideas are huge problems.

David Dolan <g0mmyg0m@gmail.com>
to IDEAS <IDEAS@snorgtees.com>
SUBJ: Some more T-shirt ideas from me

SnorgTees, I have sent you 40 of my t-shirt ideas in the past, and in my preambles, I may have sold them short. It's always nerve wracking when you're presenting your work for approval, and this may have caused me to underestimate myself. However, with the benefit of time and hindsight, I can confidently say that they were all amazing - way better than the stuff you're selling now - and so are these 20.

41: a picture of a closed laptop with the standby light on next to a closed nintendo 3DS with the standby light on. text: "STANDBY 'TILL I DIE" optional smaller text: "NEVER TURN OFF"
42: Cthulhu as a my little pony. caption: "My Little Cthulhu"
43: Doctor Who wearing a V for Vendetta Guy Fawkes mask. no text.
44: Walter White from Breaking Bad dressed in Game of Thrones style furs and holding a big sword. Text: "g[AM]e of Throne[S]" [the AM and S are elements off the periodic table, Americium and Sulfur respectively]
45: A clock dressed like Link from the Legend of Zelda series [green hat, master sword, master shield, triforce, etc]. Text: "The Hero of Time"
46: Text: "404 SHIRT IMAGE NOT FOUND"
47: Walter White from Breaking Bad peeking out of the TARDIS from Doctor Who. he's holding a sonic screwdriver from doctor who. Text: d[O]ctor w[H]o [Oxygen and Hydrogen]
48: a goth kid skateboarding. he looks kind of 90s cool like sonic the hedgehog. He's eating a hot dog. text: I'd rather a HOT DOG than HOT TOPIC [possible copyright issue on this one] 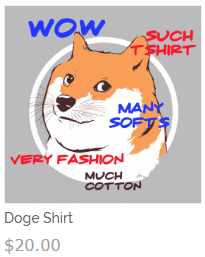 I don't mean to sound arrogant. I just think they're good ideas. Please give me money.