The Lost Transcripts of Mr. Wizard

TERRY: Where's the phone in this place?! I don't know where the phone is!

MR WIZARD: (Sitting up from the floor) We don't need a phone. We need a beat. (Mr Wizard begins to beatbox)

BRENDA: I think he hit his head. Hello!!! Mr. Wizard!!! Are you okay? Say something!

TERRY: This is fucked up, I'm getting out of here.

BRENDA: Terry, I think he really needs help. We need to get an adult. This isn't like him. The only thing he hates more than black people is rap music... 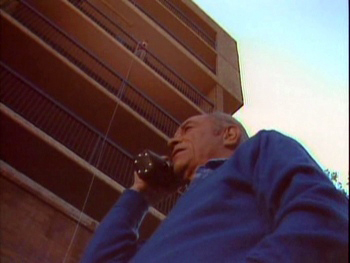 (Michael and Mr Wizard are coming down a ladder from ROOFTOP. Julie enters frame from right as they reach the ground)

MR WIZARD: Well hello, Julie! You'll never guess what Michael and I just did on the roof.

JULIE: Mr. Wizard, I have to ask you something and I don't want you to get mad.

MR WIZARD: I can't promise anything, but go ahead.

MR WIZARD: Who? What are you babbling about? Where did you hear that name?

JULIE: Well, I was on the way over and I ran into the mailman in front of your house. I told him that I was on my way to talk to you and that I would gladly bring the mail in with me. While I was walking up, I kinda shuffled through the envelopes and noticed a few letters were addressed to Don Herbert. There were also a couple addressed to Kevin Knifejaw, Jack Blaster, Prince Oxnard, and "Shifty" Rick Stansbury. Who are all of these people?

MR WIZARD: (Grabbing Julie tightly by the sleeve of her shirt and leaning in closely) Who the fuck are you? Who do you work for?! ANSWER ME!!!

JULIE: (Dumbfounded) I... I'm just a kid! What are you talking about?!

MR WIZARD: (Speaking into his watch) The Wizard has been compromised.
(Mr Wizard slams a smoke grenade on the ground and vanishes)

CODY: Mr. Wizard (chewing), when am I actually going to learn something?

CODY: Well, don't get me wrong, I like hanging out with old men and whatnot, but I've been coming over for close to three months now and I haven't learned anything! All the things I've heard about you involve awesome experiments and balloons and burnt sugar. Billy even told me that just last week you demonstrated vacuum forces using a candle, a bowl of water, and a mason jar. I want to learn things like that too, Mr Wizard.

MR WIZARD: What do you mean you don't learn anything? I taught you about Destro, didn't I?

MR WIZARD: Are you fucking kidding me? Just like... last Tuesday or something like that you were asking me about the properties of silver, and I brought up Destro and how he wore that badass silver mask. Destro? Remember? He's a weapons manufacturer and dealer? That's how Cobra gets ALL its crazy lasers and ghost bombs and warp-guns. You don't remember that conversation?

CODY: Yeah, now that you mention it I do. But really, Mr Wizard, how is that educational in any way? When will that kind of information be applicable in my life?

MR WIZARD: Give me the rest of your egg sandwich, Cody. You just lost your eating privileges.

MR WIZARD: Holy dicks, kids! I just went to the future and came back! The things I've seen!!!

MR WIZARD: You wouldn't believe it, kids! It's pretty much like NOW, except a lot less gay. I ran into YOU in the future, Calvin! And you too, Cindy!

CINDY: Yeah, Mr. Wizard! What's the future me like?!

MR WIZARD: Certainly, kids! Cindy, you're an attorney eventually. I met your husband Peter and your kids as well. You certainly have a lovely family and career to look forward to! And you, Calvin! What a fine man you become! We shot pool for close to four hours and you filled me in on your military career and worldly travels! You kids should be excited for the things headed your way! 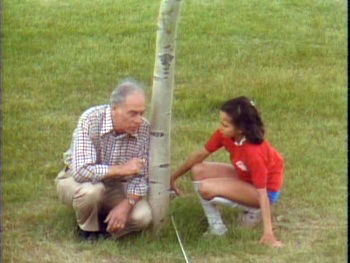 EPISODE 4011: TREES
(Scene opens with Mr Wizard quizzically gazing up at a tree in PARK as Brenda approaches on her bike)

MR WIZARD: You know, Brenda, in my youth I used to climb trees like this one every day. The kids in my neighborhood would gather around and make bets as to how fast I could get from the first limb to the top. Some would say I was too good at climbing trees.

BRENDA: Gee Mr Wizard, do you think you could still make it up a tree like that?

MR WIZARD: DO I?!? Pffft, I could get to the top, catch my breath, and be back down here on the ground before you reached the halfway mark. Don't let my age fool you, Brenda. I'd make this tree my earthen bitch. (Cracks his knuckles)

BRENDA: Bring it on, old man!

(Frame follows Brenda as she hurriedly scales the branches of the tree. Reaching the halfway point, Brenda glances down to see Mr Wizard lighting the base of the tree on fire)

Thanks to Ian at Fused Muse for the wizard-level Photoshops!