Return of the Wizard

(Scene opens at night with Mr. Wizard and Leonard squatting outside a door)

LEONARD: (whispering) So what are we doing here? And why are we dressed in all black?

MR. WIZARD: Because I'm tired of traveling the country selling assorted potions and health tonics from the back of my shitty El Camino. It's time for a change.

LEONARD: That doesn't answer my question. Whose house is this?

MR WIZARD: It's gonna be hard to land my own educational television show with such a formidable adversary hawking my every move. You want me to have a television show, don't you Leo?

MR WIZARD: Then shut the fuck up and blow the charge!

MR. WIZARD: Mr. Warlock ... you were expecting me?

MR WIZARD: The deal with Nickelodeon is mine ... and so is your head. (Unsheathing a samurai sword) Let's dance! 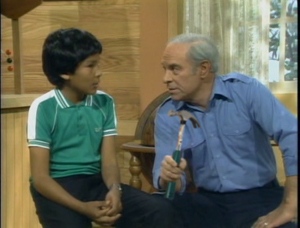 (Scene opens with Ryan and Mr. Wizard seated on the couch in the DEN)

RYAN: So the message you left with my mother said we'd be working with hazardous chemicals today? I brought my protective goggles and gloves. What's on the agenda, Mr. Wizard?

(Mr. Wizard strikes Ryan on the kneecap with a hammer)

(Mr. Wizard strikes Ryan on the shoulder with a hammer) 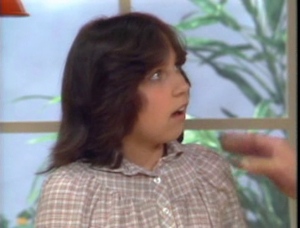 (Scene opens with Mr. Wizard, Becky, Terrence, and Claude seated around the table in the KITCHEN)

(Linda enters the KITCHEN from HALLWAY)

LINDA: Hey, everyone! Say, what are you guys up to?

LINDA: (enraged) YOU TOLD THEM!? YOU PROMISED YOU WOULDN'T TELL ANYONE!!!

MR. WIZARD: Well, you promised ME that you were disease-free. Eye for an eye, scumbag. 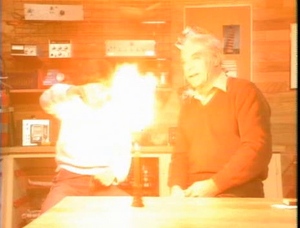 (Scene opens with Mr. Wizard, Kelly, and Donald in the BASEMENT at the lab table)

MR. WIZARD: So let's recap. Kelly, can you tell me what three essential elements you need for a fire?

(Mr. Wizard ignites a wad of tissue with a match)

KELLY: Well, first you need a heat source, such as these matches. Secondly, you have to have oxygen. A fire can't burn continuously without oxygen.

(Mr. Wizard ignites a bowl full of dried-out leaves with a match)

KELLY: And finally, you have to have some kind of fuel, such as the tissue paper or that bowl full of leaves.

(Donald runs screaming from the room, his hair ablaze)

MR. WIZARD: You owe me five bucks. Pay up. 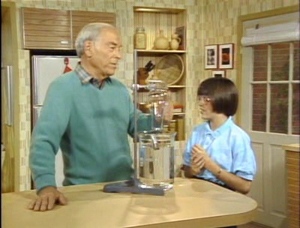 (Scene opens with Mr. Wizard and Timmy seated at the counter in the KITCHEN)

TIMMY: That sure was neat, Mr. Wizard. I never knew battery acid had so many useful applications!

MR. WIZARD: Do you have a girlfriend, Timmy?

MR. WIZARD: My wife is leaving me, Timmy. She's found someone else ... a gymnast named Terrence. We've been together for seven years now. Seven years I've wasted rubbing her feet and crafting delicious confectionary concoctions for her in the kitchen. She says I've lost my spark. Says I'm not the virile science-master I used to be.

MR. WIZARD: Fuck her! I'll show her young and virile! She wants an athlete?! I'll give her one!

(Mr. Wizard rips his sweater off, grabs Timmy by the neck, and suplexes him onto the kitchen floor)

MR. WIZARD: (Flexes his muscles) I'm a goddamn BEAST! I'll show that moldy twat who she's fucking with! This is the Wizard! I'm the prince of potions, motherfucker! I'm the ageless byproduct of a Nikola Tesla, Barbarella, Andre the Giant fuckfest. Leave me? LEAVE ME?!? I eat beakers for breakfast and shit algorithms at noon!

MR. WIZARD: I'm just messing with you, Timmy. I always wanted to suplex a kid. Let's get some lunch, I'm buying.